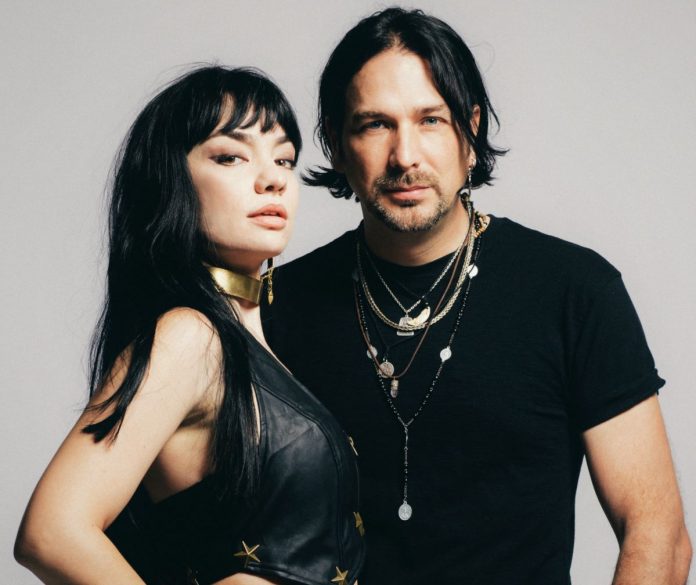 The British husband and wife blues rock duo When Rivers Meet has been announced as special guests on King King’s October 2021 UK Tour.

Excited to be performing as a duo, guitarist Aaron Bond remarked that, “Due to the pandemic, this will be the first time in over a year that we will be touring.” Continuing he said, “We can’t wait to play for our fans. It’s going to be a great experience to tour with King King and play in front of their fans as well.”

The tour new follows the recent release of their latest single, that goes by the handle of ‘Walking On The Wire’. It’s the third single to be taken from their debut album We Fly Free that was released last November.

Grace Bond is the other name behind When Rivers Meet and the pair have been following up on critically well received EP’s The Uprising and Innocence of Youth with their full length release and its spin-off single releases.

“We love this song, and we know you will be joining us on the chorus: sing it loud,” Grace Bond said of ‘Walking On The Wire’.  “Blending and interweaving our vocals around different harmonies is something we love to do, and we get to rock out at the same time. What could be more fun?”

Find out yourself, via the official music video, featured here at RAMzine – Footage for it was filmed in the Essex countryside utilising aerial drone footage.

Their passion for blues rock shows through with an underpinning of traditional blues and classic rock. The duo has made a concerted effort to keep to a genuine, gritty sound using authentic techniques, including tube tape echo and reverb chambers, that have created a live sound that keeps a vintage vibe that not only has energy but is also a representation of the ever-evolving sound of the duo.

Recorded with Adam Bowers at The Boathouse Studio in the Suffolk countryside, he also plays drums and shares bass and keys duty with Robin Breeze on some of the tracks.

In terms of who does what with this duo, the lady of the house takes the majority of the lead vocals, and also plays slide resonator mandolin and fiddle. While guitarist Aaron Bond adds harmony vocals and takes lead on two of the debut album’s tracks.

“We’re so excited about this record” said Grace Bond of the album. “Our two previous EP releases have really given us such a good foundation and helped us to find our sound. When we came to record the album, we knew exactly what we wanted to create.

“The album is titled We Fly Free, which is indicative of where we are right now. We feel we’ve grown so much in this last year as people and as a couple: it’s really given us the confidence to write with freedom.”

You can get hold of ‘Walking On The Wire’ by clicking here.

You can also watch the videos to previous singles ‘Battleground’ and ‘Did I Break The Law’ right here, while debut album We Fly Free is available here and here – For a review of the album at RAMzine click here.

Tickets for the King King tour with guests When Rivers Meet are available from The Gig Cartel. The seven-date tour starts at Leeds University Union (15th October) and ends at Edinburgh Queen’s Hall (24th October).