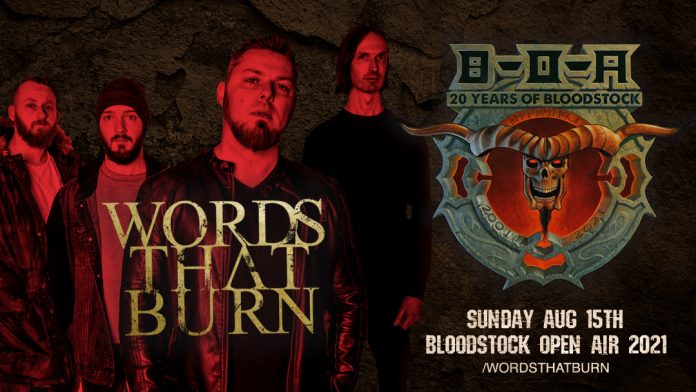 Rising Irish alt/modern metal crew, Words That Burn will be making their UK debut on the New Blood Stage at the Bloodstock Festival on Sunday, 15th August.

Fusing a crushing blend of modern post-metal core, peppered with ‘90s alternative influences, Words That Burn has become one of Ireland’s leading heavy artists from the countries flourishing underground scene.

Imagine a unique hybrid of Korn, Architects, Parkway Drive, with some Faith No More thrown in, and you’ll be somewhere in the vicinity of the bands’ evolving sound.

With a discography that totals two full-length studio albums – Pyres (2019) that reached No. 1 on the mainstream iTunes charts and Regret Is For The Dead (2010)-  the band’s sound continues to evolve with their yet-to-be titled new album, produced by Josh Schroeder (King 810, Of Virtue, Lorna Shore), due for release in early 2022.

To mark their performance at this year’s Bloodstock Festival, Words That Burn has released ‘Den of Lions’ from the forthcoming album as a new single.

You can catch the video to that right here at RAMzine.