Ben Poole – Anytime You Need Me 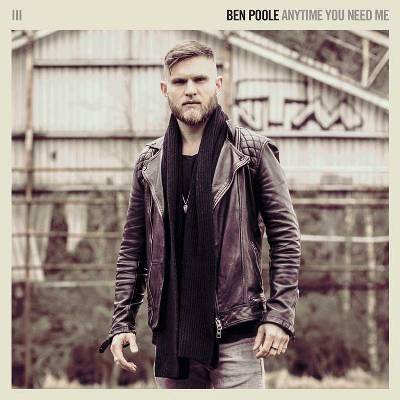 Ben Poole follows a similar route with Anytime You Need Me as his previous Time Has Come.  Same square-jawed good looks album photo cover albeit a little more macho looking courtesy of being adorned with a black leather jacket and the same pop-flavoured blues rock with some added emphasis on song structures and digging in with a little more soul this time around.

It begins with a funky mid-paced dirty groove on the title track as Poole professes his earnest intent to be there for loved ones, uplifting throughout its guitar solo still comes unexpectedly and makes you stop and listen.  With ‘Take It No More’ offering fat-ended blues rock it’s no surprise to learn King King drummer Wayne Proctor sat in the producer’s chair for this record. He also mans the drums for this album, and alongside Poole and Steve Wright has written most of the songs, while Beau Barnard plays bass and Ross Stanley keyboards.

There’s a pleasing Doobie Brothers style rhythm chord chopping sequence leading us into and through the soulful  ‘You Could Say’ and Poole turns in some tasteful guitar work in the latter sections while the lullaby grooving melody of ‘Found Out The Hard Way’ has him searching out the high notes as his piercing guitar reaches the end.    In contrast, ‘Further On Down The Line’ has a funky hard riff, with Poole’s lead guitar talking throughout. That stated it remains both music to dance to as much as share a chilled drink over.

The more strident fuzz and guitar fizz of ‘Dirty Laundry’ proves to be an Eagles cover, co-written by Don Henley – Mind you, the vocal arrangements and guitar chops make it uniquely Poole’s version. The incessant motor rhythm of a guitar while an organ purrs away and drums rock out all over  and yet everything is kept in a harmonious groove works well on ‘Start The Car’. The tender guitar ballad that is ‘Don’t Cry For Me’ contrasts well, being soul hugging and sweet.

When it comes to the stretched out riff of ‘Let Me Be’ playing over a bump and grind rhythm it suits the lyrical theme of wanting to agree to disagree and move on, and then it all ends with the slow heavy blues of ‘Holding On’ where Poole’s guitar expresses frustration and with a change in pace tears in wailing anger.

On the whole, this is an album to let wash over you and its depths sink in, being more an emotional affair rather than a work of grandstanding bravado.