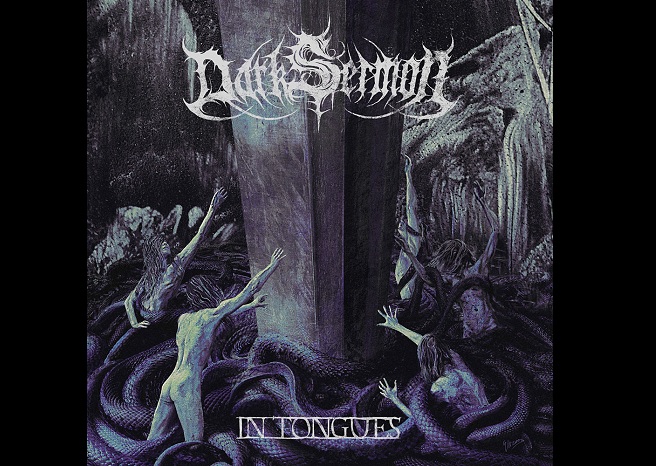 Formed in 2009, the Florida based band Dark Sermon arrives in the global metal community determined to stand out from the cookie-cutter junk and the trend-following idiots who crowd the scene.

Dark Sermon have nothing less than total world domination on their minds, armed with a new kind of heavy. They compare favourably to the stifling stomp of Behemoth, the brash experimentalism of Gojira and the ferocity of all-American heroes such as Job For A Cowboy. They take inspiration from the melodic death-metal act The Black Dahlia Murder.

Kicking off with the mighty onslaught of ‘Shepherd’s Staff’ with the ‘Driven to exterminate all that breaths’ line, you quickly realize that this is a corruption of Psalm 23 – where God is described as the ‘Good shepherd.’ Here, in this song, the poignant and declamatory lines are clear: that we have been forced (over time) to listen to a ruthless stack of lies – otherwise we risk purgatory. And what has this falsehood been all about? Is the Shepherd a saviour or a slaver? The staff rescues and it saves – but it is also a rod – and so it snares and entraps. Guitars on this track are fearsome and fiery – they glow red in the dark. And the voice of Johnny snarls, whips and grimaces as he attempts to escape the iron clutch of the crook.

‘Imperfect Contrition’ begins with a bluster of entangled guitars that are jammed up against a bunch of drums. These tear and gnaw in their ever-increasing efforts to get away from the melancholy bass-tones. The immense shame that is found in the lyrics is as thrilling as their heartfelt desire is to be relieved. Soon they become nervous in their own fragility. This is bleak, significant and delicate. It’s a hymn to be sung alone. And in deep sorrow.

‘The Scales Of Justice’ is indeed a “Dark Sermon” – in that it is an oath from a darkened place. A promise of extinction, of pain and suffering. The darker notes of bass (from Austin) are nurtured here, then carefully blessed by those stormy drums from Bryson. Meanwhile, the thoroughly penetrative guitar is manifested as a guiding light – luminescent and powerful. It is both tragic and frightening to behold.

The beefy slabs of riff on ‘Forfeit I – The Crooked Quill’ take you on a shocking journey to a stink-hole of foetid darkness, where only a golden guitar twists and grooves in the shadow. The luminous top-registers of sound brightly echo through an obsessive and barren landscape, just as the melodic contours of the piece create a humiliating path of sorrow and grief for all listeners.

Then part-two of Forfeit, ‘Worn Thin’ is a raging gale of horrible diaphanous forms that pass one-another on a misty plain. The guttural voice of Johnny is inspired – and not surprisingly grotesque. The deepest and darkest forms of guitars – as dark as you can possibly imagine – then follow the voice perfectly. These lead the listener very quickly to the edge of fragile destruction. The dissonant guitar-work, and the ever-changing rhythmic displacement mean that you’ll start to feel uncomfortable, for a while, but soon you will also start to discover new levels of ecstasy within the deep folds of this dark song. They are perfectly vile – but rapturous. This is a beautifully crafted conception.

The ‘Tree of Life’ is often imagined by artists to be something that we can choose to fly above or beyond. We can transcend the root and branch to fly free, but the groaning significance of the deep notes in this piece will help to calm those aspirations, and will keep your feet planted solidly onto the ground. Then you start to be pulled down and underneath. When the drums rush in, and a profusion of sparks and powerful chords pull you this-way-and-that, it is all that you can do to stand firm and stop yourself from suffocating. So you let your body go – and sink into the earth, because at least ‘underneath’ you may find some peace and a sort of forgiveness.

‘Testament’ is like a cradle of acid guitars that form a tangled framework for the intrepid drums to roll into and to foam against – just as the flying voices find jagged new roosts. The incessant head-banging fury of this track will bring many new fans to the fold. Whilst the vocals on this track are particularly valiant and masterful, the wicked guitars create fire-storms of intense anger. Altogether, it’s a sublime piece.

The album concludes with the title track, ‘In Tongues’. Within the hectic turmoil of soul-searching, the protagonist is tortured by frantic voices … first these tell him not to let anyone in – but then they promise deliverance: at a terrible cost, for “He Who Saves” is actually “The Devil Himself”. There is a deep blanket of thick smothering power that extends itself murkily across this track. It will throw scattered ashes into every corner of the listeners mind and will leave an audience stepping back – recoiling and wincing – especially if they choose (later) to surface, blinking, into the cruel bright light of fearsome day.

This handsomely demonic album is full of dramatic quality. It is a work of fragile self-expression and reliable hidden strength. Sometimes Dark Sermon can create a brutal vortex of power – often too bewitching to comprehend. At other times they create shapes and sounds that clog the surfaces of the songs – like an inlay of bitter bones. But there is always the clear trace of expansive ambition, alarmingly turbulent experimentation and incredibly sharp melody. And, of course, the songs here are all as dark as a cellar full of terrors.

Find out more info on them on their Facebook page – facebook.com/darksermon