H.E.A.T – Into The Great Unknown 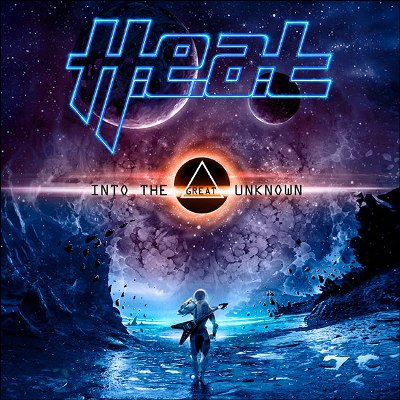 A returning guitarist, a new record label and the intent to make an album with a new creative spirit expanding upon the melodic rock template that’s served these young Swedes well is what led to creating H.E.A.T ’s latest album. And is it different?

Yes, and no. Dave Malone (or Sky Davis to give him a nom de plume) on guitar fits in and makes nice sounds, but as previously solos aren’t excessive so his input is possibly more to do with the song writing. That’s really not that different either though, the blueprint of Erik Gronwall’s voice being used effectively to sing words that become glowing ear worms to the listener reamins. But they do lean towards some new influences other than the classic melodic rock variety and we hear keyboard dominated new wave and art pop sounds, plus they’ve developed an attitude on several tracks hinting they’re not quite the young spirits they were and have decided the world needs changing, if only a little.

Guitar chords scratch out over a football chanting “Whoah-whoa” on opening number Bastard Of Society’, followed by a plethora of hooks as Malone/Davis starts widdling away on his six string and Gronwall expresses his anger. Since it’s just a song about doing what you want to I just smile and sing along. It’s where Alice Cooper meets Loverboy, and surprisingly that’s not a bad place to hook up.

‘Redefined’ is where the different musical influences begin to be felt.  From the more rugged side of The Eurythmics, the broad stroked imagination of Shakespeare’s Sister through to the more obvious Euro-clout of A-ha, there’s this twitching feel that their parents’ record collections may contain such vinyl 7 inches alongside Bon Jovi colour discs. Overall it’s a groovy dance number with sexy subtle guitars sliding around and an aching heart sighing vocal delivery.

‘Shit City’ continues H.E.A.T penchant for being potty-mouthed while acting sweet and is about the quandary they felt they were in as a band and a need to change that. It clocks in on an old school riff, some welcome rock piano by Jona Tee, and enough stacked harmonies for a Def Leppard B side. With ‘Time On Our Side’ Tee’s keyboards pulse and beat ala Vangelis, the rhythm section of Jimmy Jay (bass) and Crash (drums) upping the tempo and the whole thing opening out with a rather U2 type ambiance. ‘Best Of The Broken’ evokes a 60s soul swinging feel wherein The Doors shuffle round a dance floor with The Swinging Blue Jeans. Odd, but it works, though the use of talk box guitar is a little too Bon Jovi rather than Peter Frampton for my tastes.

Gronwall comes over particularly loud over a much quieter guitar and keyboard on the hymn come folk ballad opening of ‘Eye Of The Storm’ but when it hits its stride it veers away from becoming a power ballad and into a mid-paced semi-epic rocker of the Gottard variety, and that’s meant as a compliment.  ‘Blind Leads The Blind’ is another musical detour that brings with it rewards. Opening in prog pomp rock fashion it could be an alternative James Bond theme, guitar then tooling as they go through an Alice Cooper now dating Journey period with some big choruses and Tee’s synthesisers leading the way for Malone to dance dangerously along the fretboard during a solo, that as too often should be longer.

‘We Rule’ begins in a classically played manner, Tee’s piano at one point seeming to play a variation on Three Dog Night’s hit ‘One Is The Loneliest Number’, whether intended or not it fits and as Gronwall sighs you know the fairer sex listening do likewise.  It continues to progress in a classical manner, like something Queen might have tried but came across camp whereas this feels sincere and as Malone’s guitar starts playing the vocal melody line in solo it takes on a torch waving end of show feel. On the other side of the coin Gronwall sings “Tell me your dirty secret, darling,” over Tee’s pomp-stacked keyboards on ‘Do You Want It’,  the vocals then taking in helium as the song populated with different characters comes across like Sparks playing AOR with added sex. It’s like rock music for a fashion show, the rhythm section taking things into a Giorgio Morodor goes rock beat.

As it began so it ends with a “Whoah-whoa” here and a stacked harmony there as they venture ‘Into The Great Unknown’.  Classical themes of the film epic manner give way to Malone’s question and answer guitar riff, and they get a little bluesy but nothing for anyone to have a heart attack about. I was born into a world where bands that could sing and play as well as this had singles all over the shop. To my mind, this is more of the same from H.E.A.T. However there is a change no one’s really mentioned is that the different record label they’re on is ear Music, and that company has some heavy hitters of all musical genres on it. That means someone’s got a lot of faith in the career plans of this band. Let’s keep watching, but above all, listening!

Share
Facebook
Twitter
Pinterest
Linkedin
Email
Print
Mix
Previous articleBrian Fallon set to release a stunning collection of blues, rock and punk
Next articleNathan James of Inglorious “We get to walk out on the main stage at Download, it’s definitely a big achievement!”