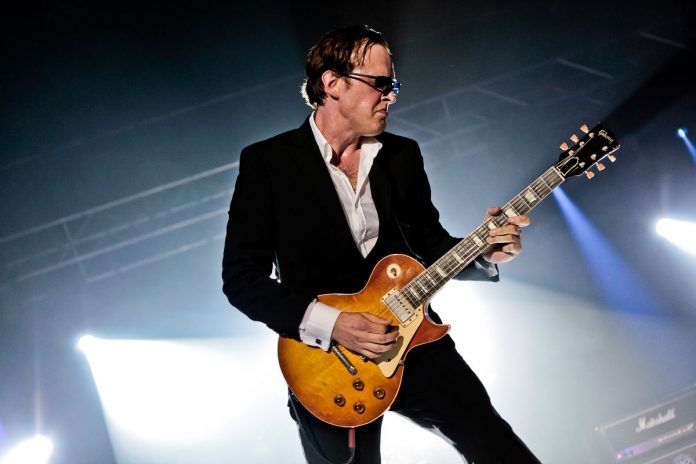 Joe Bonamassa’s latest studio album is said to be inspired by his personal British guitar heroes, primarily here we’re talking former Yardbirds Jeff Beck and Eric Clapton, of whom by way of extension we add John Mayall & The Bluesbreakers and Cream. Whereas the title is apparently less to do with rock royalty than that while recording, the Prince of Wales’s youngest son and his former-TV supporting actress wife got found out doing deals they shouldn’t and the Firm politely excused them of their future services.

You can hear the difference in tone where Marsden’s guitar comes in on a number of tracks, but it’s in his songwriting where the material benefits most, less blues rock for its sake more songs that imbibe the blues as influence. Even more so, it’s Brown’s contributions that add weight.

A vocalist and record producer himself, you wouldn’t automatically think Brown’s words would make such a difference, but they do.  Beyond his early beatnik leanings on to evocative waves of poetic deliberation, perhaps it’s in their pacing that the music is forced to change to suit the moods presented. You see, you can often forget the guitar influences and rather consider Jack Bruce – For while Brown began his collaborations with Clapton and Bruce in Cream he would continue to do so with the late bass player through much of his solo career.

Press play and a gentle piece of orchestration politely but firmly reminds us that this here long player was recorded at Abbey Road, where their Lordships Sir George & The Beatles changed music’s landscape forever. However, bearing the title ‘When One Door Opens’ proves apt because the music seems to change at nigh every turn.A blues inflected hard rock riff and accompanying melody acts as what we would consider the main song, and it would have sat comfortably on any of the first three Whitesnake albums, Bonamassa’s voice is a near whisper, even accompanied by female backing harmonies, in the verses before louder invocations occur in the choruses come in – This combination is a classic Bruce solo approach, drawing the listener in.

However, just as I think I’ve twigged what their game is it goes into a bolero; not Beck’s infamous number but one using his 60s penchant for enough feedback to bleed your ear drums dry. Then, quick as a flash we’re into a slamming heavy rock riff of the kind Roger Bain patented production-wise for Sabbath and Budgie to run amok in when the world was young. That the riff then swings like a hammer all jazzed-up while vocals and whirring distorted guitar prepare for themselves for another bit of bolero to end in feedback and an acoustic coda of the originally sung part to conclude the affair is pretty impressive going for just over seven minutes long.

‘Royal Tea’ is much more atypical blues rock, though again it swings rather than sticking to that rigid four to the floor beat that can be pleasure or curse, depending on the listener. So too female vocals add support, the track itself sounds like one left off the running order for Bruce’s How’s Tricks album, though again it borrows from Beck applying his ‘Ain’t Superstitious’ riff from the classic Truth album at one point.

‘Why Does It Take So Long To Say Goodbye’ is a slow blues love song with a Gary Moore tone on the intro before mellowing. Bonamassa sings well on this, and as the song builds exponentially into a bracing instrumental section there’s a fluid guitar solo to be heard – Though it should be noted, such six string excursions veer towards the shorter side, in service of the song. Some appear deeply personal, others more obviously dipped in Pete Brown’s poetic pen.

The lyrics to ‘Lookout Man’ point to alienation and despair, but possibly of the singer’s own making for it enters pumping along on a bass riff informed by the machismo taunts of Jack Bruce’s ‘Powerhouse Sod’ and ‘Politician’ – That this is offset by syncopated drumming and female vocals that steer it towards a sludgy funk with certain repatriated psychedelics grooves proves interesting, and also allows for a scouring, splintered guitar solo to trade time with one on harmonica.

‘High Class Girl’ fits that John Mayall’s Bluesbreakers mould by way of Albert King in a stylish smooth sensual groovy blues number. Does it take as its the cue the overly covered ‘Good Morning Little Schoolgirl’, that’s no longer considered PC? Who knows, it has a really nice feel and the notes in the guitar solo cascade with subtle deference to the tune as awhole.

‘A Conversation With Alice’ melds from bluesy rocking snaking riff to song that’s indebted to The James Gang’s ‘Standing in the Rain’. The blend is cohesive blend and works well while lyrically it’s, if not therapeutic remedy then consolation and a beginning acceptance of his own personality, following his previous album, Redemption, that had some fans concerned about his wellbeing.

‘I Didn’t Think She Would Do it’ enters in distorted wah-wah blazing rock, tipping its hat to both Cream’s Disraeli Gears and those Yardbirds rave-ups that preceded it. It then slam dunks hard into a stoned bluesy rock of the kind Bruce, Trower & Lordan supplied back in the 80s; it kicks into double time as a widdly-widdly guitar solo ensues before the instrumentation steers into Whitesnake-in-Allmans Brothers mode.

Gentle, broody Americana s where piano and organ percolate in the background, over a song that paints a picture of lonesome cowboy melancholy in ‘Beyond The Silence’ whereas the following ‘Lonely Boy’ proves a welcoming up tempo ditty of big band boogie, with Bonamassa reaching camp-like high notes at the end of each refrain adding to the good-natured feel-good factor. Then, it’s left to the bluegrass-tinged ‘Savannah’ to drift out on.

Collaborating more meaningfully is the way forward for Joe Bonamassa to my mind, he seems a happier individual for it, and there’s a bunch of songs on this record that really stand out, with a touch of class.

Royal Tea is available now on Provogue/Mascot Label Group. You can purchase it byclicking here and here.

You can stream/download the single ‘‘Why Does It Take So Long To Say Goodbye’ by  clicking here.