Nazareth – Tattooed On My Brain 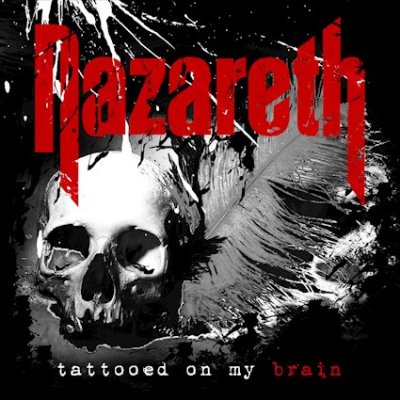 Nazareth were never a straight-up hard rock band, they bothered the Top 20 singles charts too much in their glory days for that and one look from their earliest albums on would tell you they were as likely to cover a number by The Band as much as The Yardbirds. Ultimately they brought out songs they liked.

Not that they’ve been indifferent to changing with the times and it’s rare you can’t sing-along to a Nazareth number, but there have been too many hit and misses along the way for some. Today’s music scene is a more narrow-minded market driven place, variety is rarely appreciated, now the band themselves appear to be acknowledging that but on their own terms.

The retirement of original frontman Dan McCafferty for health reasons took many by surprise. His raw emotive lungs were the very identity of the band to the man on the street. Guitarist Manny Charlton’s leaving oh so many moons ago may still those long-in-the-tooth debating his replacements over the years but with all due respect those who took ‘Love Hurts’ to the top of the charts internationally wouldn’t recognise him if he sat down beside them. Regardless, Jimmy Murrison has served time long enough to earn his stripes, as has Lee Agnew who’s played drums with the band since Darryl Sweet passed away (and who I believe was taught to play by him). Thus with new vocalist Carl Sentance (who has past form with bands like Persian Risk and more recently Don Airey’s touring band) on board it has brought the band’s average age down considerably.

Only Agnew’s father Peter remains of the original line-up, and being a bass player, many might slight his input. They’d be wrong to. His is the heart and spirit of the band now and his bass playing while never showy continues to compliment and steer the band’s overall sound. That stated, old fashioned rock ’n’ roll and blues rockers are of lesser significance right now and the addition of Sentance has allowed Murrison to express and develop his obvious heavy metal inclinations more within the framework of the band’s sound.

That all said, most songs pitch in around 3minutes long, the last (an oddity we’ll get into later) just shy of six. They know to get the essence of a song down, and presumably if it works they might extend it live.

They open in fine form as they tell us to ‘Never Dance With The Devil’. Staccato shakes and holds contrasting with slithering slinkier runs there’s the essence of vintage Nazareth here but old school rawk’s given a metal edge. Naturally the main thing you notice is a distinct lack of gargling-on-razor-blades in the vocal department, so it’s at this point you accept Agnew and the lads’ decision to chose Sentance and give the singer’s clearer high-pitched pipes a chance or wish them all the best with no hard feelings and learn to move on. Me, I’ll stick around a wee bit longer.

They then go and confuse the issue a bit because title track ‘Tattooed On My Brain’ combined with its bare skull fronting cover is not quite the balls out rock we might expect. Sure there’s a chugging chord sequence but come the choruses it pogoes off with a new wave pop punk feel. I rather like it, but it might throw a few people at first. For those not quite with us on that score I offer you as compensation ‘State Of Emergency’ with Murrison shredding and crashing out a distinctly wonderful raucous noise on guitar that’s a tip of the hat to their old ‘Razamanazz’ mixed with Sammy Hagar’s ‘This Planet’s On Fire’ all given a bit of a Motorhead treatment, while ‘Rubik’s Romance’ chugs along colourfully and deserves a good listen lyrically.

More head bopping is offered on ‘Pole To Pole’ with an incessant rhythm guitar clanking away and a wiry lead out in front, and Agnew accompanying on particularly chunky bass. It features the most McCafferty like vocals you’ll find on the record though I should tell you it’s about travelling the world and life’s up and downs, not a tour of a local strip club – Although it could prove to be right good dance floor number.

‘Push’ has the Agnew family giving it some Zeppelin like rhythmic dynamics, with much washed sweeping slide guitar and wailing vocals, and there’s also some sliding blues opening ‘The Secret Is Out’ before  it ups it game becoming a staunch bolshie rocker while deviating in tempo along the way. A song about finding about your woman is cheating on you, stopping at one point to allow just guitar & vocals a brief poignant moment before some vocal gymnastics and the band returning as a solo sends it to bed. There’s a whirring guitar over a heavy barrage of riffage that has a touch of the Michael Schenkers about it with ‘Don’t Throw Your Love Away’. While musically unrelenting, lyrically it’s as if there’d been a change of thought following the last number and Sentance plead the woman not to go, albeit forcefully in its vocal execution.

Chugging like a steam train going round bounds and down under tunnels with a repeated chorus is the mantra rock of ‘Crazy Molly’ while for ‘Silent Symphony’ we get a bit of an epic despite coming in at only 3.48 minutes. From hard chorded downbeat opening to more upbeat drama, constantly kicked into shape by Agnew Jr, “Is it better than you? Is it better than me?” sings out Sentance, and while I haven’t a clue what he’s referring to it sounds rather nifty. Despite its cautionary tale ‘What Goes Around’ is an upbeat number, In fact not just a foot stomper, but a head and ass shaker too. In contrast, ‘Change’ shifts between having a poppy 60s feel and cranking up with a Murrison’s guitar thrashing away. It’s like The Byrds having a debauched night out with Guns ‘N Roses and The Cult.

Tattooed On My Brain concludes with ‘You Call Me’. Not so much the joker in the pack but certainly an oddball affair.  Slow mournful bare broken guitar chords and bass with treated vocals on top – I question if this is is actually Sentance and not Agnew Sr?  There’s a harrowing blues feel, distant echoed slide, 3mins in as the guitar sends out exploratory note soloing briefly before returning to the main song, then at 4.45 it picks up again noodling with a melody through to the song’s fade out. It’s like nothing else on the record, more the soundtrack to a Rob Zombie western horror movie. Freaky.

Nazareth are celebrating their 50th Anniversary this year, Tattooed On My Brain is their 24th full length studio release.  In the past they’ve declared themselves a band who sing for their supper, but I’d share breakfast with them too.  Their identity remains intact, and they sound enthused. The hair of the dog might be a little grey in places but they’re still Dunfermline’s bad, bad boys.