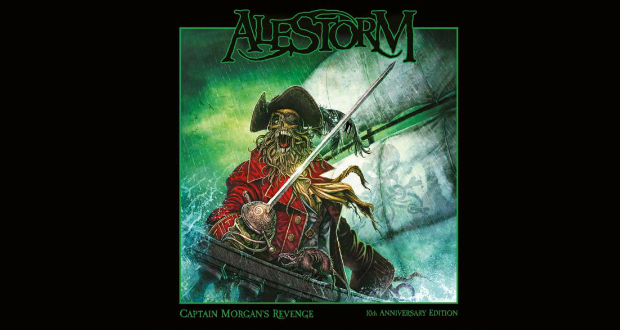 Every day, a new metal subgenre is born. We’ve had everything from mathcore to pornogrind over the years, and it’s now been a whole decade since a group of rum-loving Scotsmen brought PIRATE METAL into the world.

Captain Morgan’s Revenge was an album that should have made eyes roll, but instead it made heads bang. People such as myself often tire of ‘gimmicky’ metal, but when a band like Alestorm demonstrates such excellent songwriting and playing ability, it’s impossible not to fall in love.

In fact, the only thing I didn’t like about the album was the mix. So you can imagine my delight when I found out that on the tenth anniversary of CMR’s release, a remixed and remastered version is being unleashed upon the world. It’s all the same folky, piratey goodness, just with a much clearer and refined sound.

The guitars didn’t quite cut through on the initial release, but now, thanks to a little editing magic, they’re not only in-your-face, but they’re in-your-ears, in-your-body…. in-your-just-about-everywhere. Music production takes giant leaps forward every day, so the bar is always being pushed higher in terms of sound quality, so it’s great that Alestorm’s debut has been revitalised to the point where it can easily compete with all the big names in modern metal.

Some people prefer muddier mixes. Those people are morons. Unless we’re talking about black metal or grindcore, a good mix is always going to be superior over a crappy one. And let me tell you, landlubbers, this is a good mix.

The bass is really given room to shine, as are the drums, which pack the same amount of punch as a right hook from Mike Tyson. Rhythm can really make or break a song, so it’s wonderful that they spent time really focusing on that in the remixing process. ‘Death Before The Mast’ is a good example. Each snare hit is like a beautiful punch to the face.

The vocals sit much more comfortably than they did before, and thankfully nobody decided to drown them in reverb, so it still feels like Christopher Bowes is right there in the room with you, forcing rum down your throat as he busts out a wicked keytar solo.

I was expecting to find something moan-worthy, but alas, land lubbers, I have found no such thing. This is a remaster well-worthy of a re-purchase. So get to it!

Sam Hayler
I wish I could call myself a 'lifelong metalhead', but in all honesty, I listened to some real crap when I was younger. Hopefully with enough decent metal reviews to my name, and a ritual human sacrifice or two, I can make it up to Satan. Here's hoping. I'm Sam, by the way.