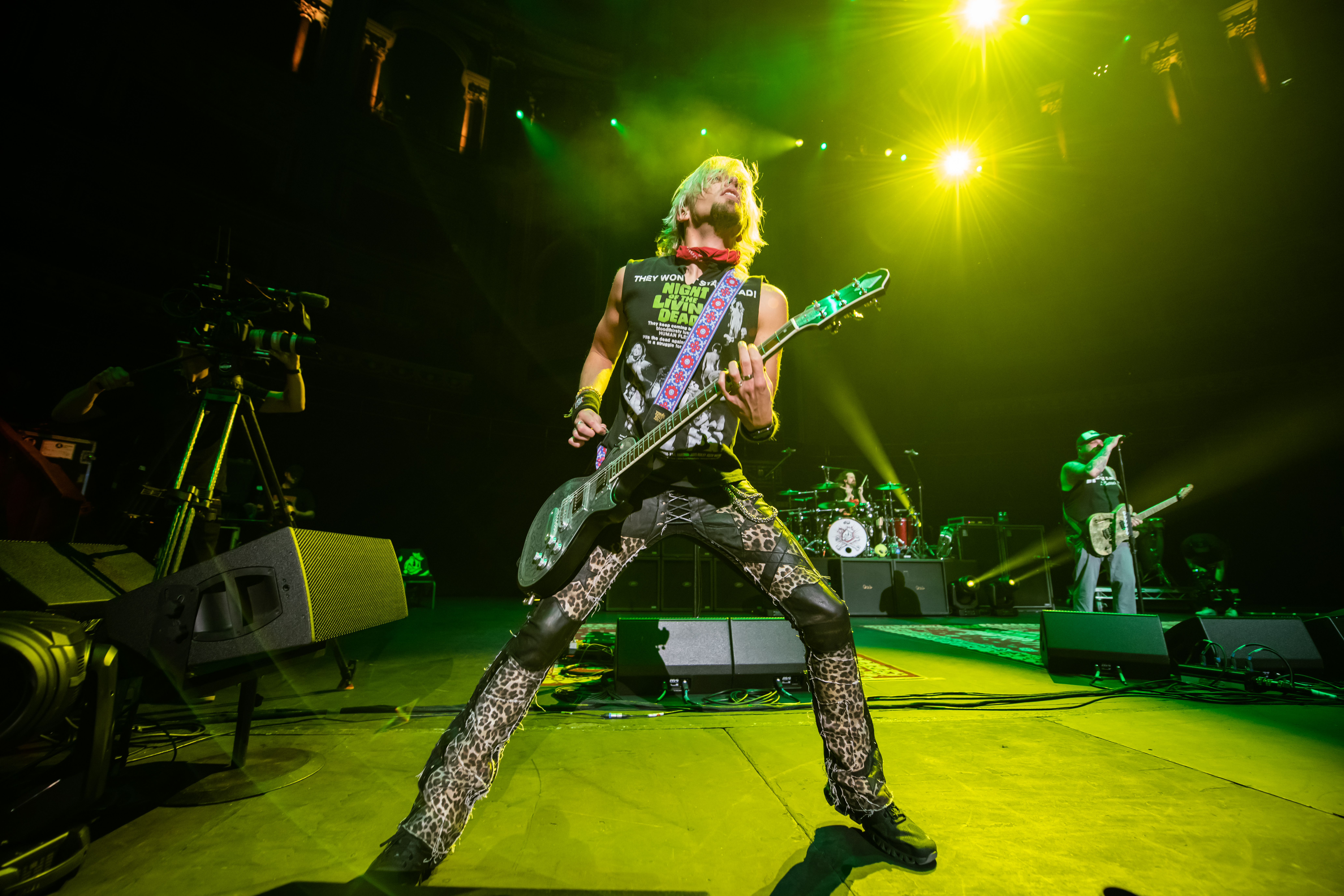 Two years in the works, Fourteen years as an idea, but finally dreams are being realised and bucket lists being checked off. These last two years of postponements and concerns courtesy of the turmoil the World was thrown into seem to have felt much more like the fourteen years that the dream of playing the Royal Albert Hall has lived in the minds for Black Stone Cherry, but for both fans and the band, the realisation of the events as they took place on the night seemed to have attained far higher than any expectations.

For many, myself included, this is the first indoor event since around January or February of 2020, anxiety and nerves rising as the day goes on, trying to remember how to even get to gigs is a challenge! Are trains running? Do I have the right tickets? How do things work on the tube? The list goes on, but as soon as you walk up to the grand venue dominating the view, all the concerns and feelings evaporate from the body. Staff are more than willing to help anyone and everyone, it sets the tone perfectly, pointing people in the quickest route to their seats or the nearest bar. It isn’t too long before the stage is taken to by the future legend in the making, Kriss Barras. The plucky Brit pulls no punches in his set, with a super tight band around him under his namesake, The Kriss Barras Band, they take to smashing out their blues-rock with Zakk Wylde flair as if they are the main attraction. Every moment really raises the bar of what to expect from the nights’ music, and he is sure to remind everyone how thrilled he is to be in such an iconic venue doing this, so much so you can probably see the smiles on the band from the nose bleed seats. Never does the gent put on a bad show, and as shows go, Kriss is quick to remind everyone as the set closes that they will soon be back on their own headline tour around the UK early in 2022, a show worth catching for sure.

Come the interval, there comes the second thing you forget about what you missed at gigs, the people! A small walk to the bar and it is smiles and conversations all around. The demographic of a Black Stone Cherry gig is a rare breed, the net of the fanbase is cast so wide that all walks of life that may never cross are talking and sharing drinks like best friends in life, even queues for toilets are brimming with life. Being able to actually catch up with those friends made at gigs through the years is what makes the night really special though. It seems like a blink of an eye goes by though before the tannoy announces the band are soon to take to the stage as we usher ourselves all back to our seats.

Queens Bohemian Rhapsody airs out through the PA as lights dim and the band rushes the stage and wastes no time in throwing themselves around the venue. Emotions really take over with both the crowd and band, focused mostly on earlier material, they really brought the rock and roll to the Albert Hall. Bassist Steve Jewell (Otis) fits in perfectly with the band as though he’s always been part of it, and rightly so given their shared Kentucky roots.

A few of their recent release tracks make the set with ‘Again’, ‘Ringin’ in My Head’, and the softer ‘In Love With the Pain’ getting some airplay between the hits, but plenty of the set rested on their sophomore release ‘Folklore and Superstition’ with a whopping six tracks making the set. Collectively, they produced a sound unlike anything you could wish for, the astounding circular venue holds its perfectly and its natural draw to the stage from anywhere in the venue makes for prime listening. There is nothing lost on the fight we’ve all taken to get there, and the sacrifices people have made, losses they have suffered and battles we have all needed to overcome to be where we are are all extremely brought home when Chris as he has done all tour, dedicates ‘Things My Father Said’ to his recently passed Father performing it solo with the last chorus performed by the crowd with lights in the air. I cannot imagine what the experience must have felt like for the man performing himself, but it was not lost on him for certain. Picking up the party a bit more, they close the set out with some early singles, ‘Blame It On the Boom Boom’, ‘White Trash Millionaire’, and of course, ‘Lonely Train’. It is such an emphatic atmosphere that can only be bested by the knowledge that before the set, the crowd were informed that the show was to be recorded for a future release. As is the way with Black Stone Cherry, they have one more up their sleeves and return to the stage for a one song encore to finish the show in the same way they always do, with love, positivity, and a constant reminder that no matter how bad things get, we all have each other and can push through anything when you lean on your neighbour. ‘Peace is Free’ closes out the perfect night out in a year that welcomes back live music, and in one of the most iconic venues celebrating its 150th birthday. The boys from Kentucky doing their state and our scene proud.

A huge thank you to all involved, from Cosa Nostra PR, The Royal Albert Hall, the fans, the bands, and photographer Ben Gibson for use of his images. More of his work is available on the following links and socials.