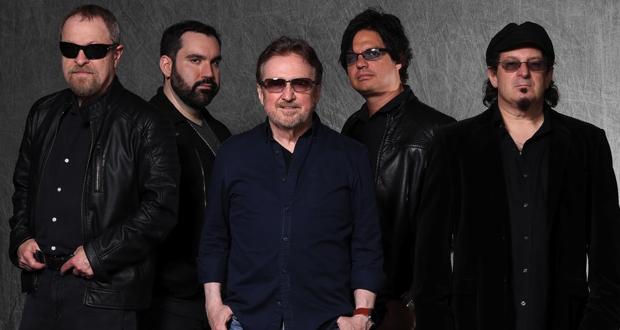 In one form or another the Blue Öyster Cult (BÖC) has been around for the better part of fifty years, and the band still boasts two members of the original line-up in Buck Dharma and Eric Bloom. Back in the day, through the mid-late seventies, the BÖC were a match for anyone in the rock scene, and their ability to combine literate compositional skills alongside obtuse lyrics led to them being dubbed, somewhat patronisingly, as ‘the thinking fans rock band.’ But, whatever, it’s undeniable they’ve had an influence, with both Metallica (who covered ‘Astronomy’ on their Garage Inc. album) and Maiden citing them with reverence.

Recorded ‘live’ in Cleveland, Ohio in 2014, this album (their seventh, eighth or ninth ‘live’ album, depending on whose list you believe) offers a comprehensive trawl through the archives of the BÖC, with several indisputable rock classics alongside a few lesser known tracks which don’t often get performed. If BÖC ever get played on the radio, it’s inevitably ‘Don’t Fear the Reaper’ which gets the nod but, as this selection of tunes suggests, they’ve given us a lot more than just this one song. They’re also more than just a classic rock band, as can be heard on ‘Black Blade’, a robust mix of classic rock and prog, with lines like “My cosmic sword goes on for eternity”, laden with synths, some crunching guitar work and sounding like a nod to Rush.

For a band with many years of stagecraft behind them they can still pack a punch, which is evident on tracks like ‘OD’d on Life Itself’, ‘Burnin’ for You’, which features some scorching guitar work, and ‘Red and the Black’ with its duelling guitars. Every track is of a high standard, but there are several indisputable classics. An extended version of the mighty ‘Then Came the Last Days of May’, about a doomed drug deal, features some sublime guitar work. ‘Godzilla’ features one of the most underrated riffs of the seventies, which contains mercifully short solos on bass and drums, and with a final verse featuring the line which should resonate in the current climate… “History shows again and again, how nature points out the folly of men”. With Australia burning and climate change now a reality, this line says it all. ‘Don’t Fear the Reaper’ now incorporates a Rush feel with synths and played, alongside ‘Godzilla’, slightly slower than on previous ‘live’ albums, but none the less effective for this. This is a good album but, unless you’re a BÖC completist, probably not an essential one, because there’s nothing on this album they haven’t released better versions of on other ‘live’ albums. But it’s a timely reminder BÖC are still hanging in there and, after all these years, can still turn it on and put on a show.