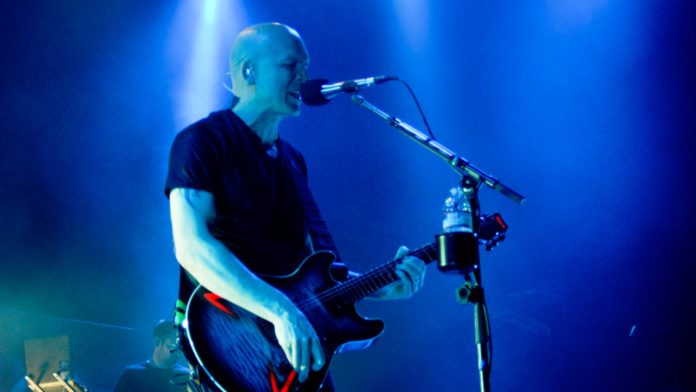 Devin Townsend stubbornly refuses to be pigeonholed, and has flirted with several genres throughout his career of over twenty-five years; ambient, prog, country, death metal? He’s done them all. Whatever else you might want to say about him, it can’t be said he’s risk-averse, taking an especial delight in making life difficult for himself. When his album Empath was released last year, he said it’s the risk of falling flat on my face where any true progress has occurred in my work.

This album is the first in what’s to be called the ‘Devolution series,’ a group of oddities and interesting material being offered, not as major releases, simply as material Townsend wanted his fans to hear, starting with ‘Live at Leeds 2019,’ a remixed and remastered version of the show originally released on the Empath deluxe edition, which if you’re a fan you’ve probably already got so unless you’re a Townsend completist, there’s nothing for you here.

But what if you’re not a fan?  Townsend’s a ‘marmite’ character … you either ‘get it,’ love his work and ascribe to the view that he’s a genius, or you don’t, regarding it as overblown drivel. Onstage, Townsend’s usually accompanied by a stream of ridiculously talented musicians but in Leeds, on his own, he handles himself with aplomb, and his caustic wit and acerbic comments occasionally has the crowd in stitches, however the opening ‘track’ is six minutes of Townsend tuning up and engaging with the crowd. I’m pretty sure I’d not be too pleased paying to watch someone open their set with a lengthy tune-up .. don’t they have roadies for this?

However, once the set begins with ‘Let it Roll,’ you soon realise a Devin Townsend acoustic gig is unlike most others. He isn’t an acoustic player in the way Steve Hackett is, he treats his acoustic like a lead guitar, plucking out notes, occasionally strumming and rarely does he fingerpick a tune. But this isn’t to say he can’t play .. on ‘Coast,’ for example there’s some very nifty acoustic guitar playing, and ‘Deadhead’ sees him playing some very chunky chords on his acoustic accompanied by some manic screams.

His voice sears all over the place, ranging from a low register on ‘Funeral,’ a quiet maudlin song about loss, up to the surprisingly high notes he reaches on ‘Let it Roll.’ But when his normal voice is used, like on love song ‘Ih Ha,’ his restrained usage of a high voice sounds not unlike Jeff Buckley. And on ‘Terminal,’ for me the best track on the album, he shows his true prowess as a vocalist.

Devin Townsend’s an artist who always takes fans on a ride. There’re no casual hangers on with him .. you’re either in all the way or you cross the road to avoid him. Me? I’m in the middle of the road, respecting what he does but unsure which side to cross over to.