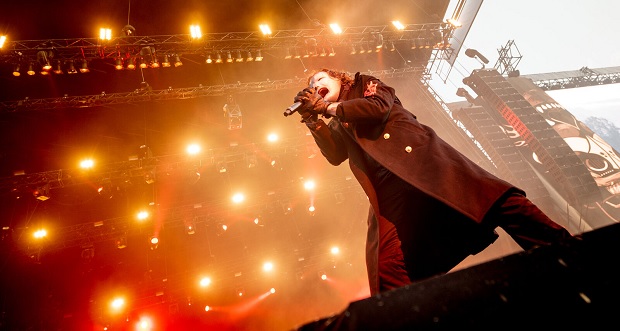 So here we are the ‘middle’ day of DL19: For some the best day, the show-stealer. Yet, for some, this is a stepping stone to the grand finale. Last night we came for Def Leppard, but the real headliner was Mud (apologies for that awful joke). Tonight, SlipKnot close the festival, yet there’s still a Puddle Of Mudd (again, sorry). Saturday looks like there is a lot of variety so let’s dive into the mud bath and see what we find.

Nice and early, Alien Weaponry jump start the main stage with their unique brand of Maori-metal. I can see a young Sepultura in these guys, the road is clear for them to bigger things.  Think the New Zealand teens were virtual unknowns at their Bloodstock performance and they are opening the main stage at Download. I feel bad for the other bands who have to compete with this. Check out our interview with them (above).

After a moment to catch our breaths, Royal Republic really makes their presence known with Ron Burgundy from Anchorman-style red lounge suits. In fact, frontman Adam Grahn’s Tasche makes him a dead ringer for the Will Farrell character. There’s something really different about these guys. Yes, they are a hard rock band, but there are glimpses of pop, and even blues at times. There’s something a bit refreshing about RR, very upbeat but very ‘hard’ at the same time. Watch our interview below.

Wading the clarts to the Zippo stage for a band who really wouldn’t usually play a festival like Download. A tribute band. With a difference. A Nirvana tribute, fronted by Elvis Presley. How does that work? Elvana shows us how. Starting with ‘Breed’ and ‘In Bloom’ this feels like a straight-up Nirvana covers band with a few glimpses of ‘Viva Las Vegas’ and ‘In The Ghetto’ for the fun of it. Not a bad act at all and the playing is spot on. Very entertaining and highlight so far. Complete with cheerleader backing singers and throwing yellow ‘Nirvana face’ balloons to the crowd, this is a great show overall. ‘Elvis’ splits his pants during the set announcing he would have rather fell off the stage like Dave Grohl. Finishing with a mash-up of ‘Rape Me’ and ‘Love Me Tender’, followed by ‘Little Less Conversation’ into ‘Smells Like Teen Spirit’ the crowd leave happy. Elvis Presley was a covers act anyway.

Still, time to catch the rest of Power Trip on the main stage. Although a very young band – they understand the thrash metal style and culture. A huge draw and hopefully a big future for the Dallas band. A lot of people were introduced to bands like Power Trip via the use of their music in WWE/NXT – speaking of which the NXT tent (this year NXT UK) tent is popular as ever. This year, they are recording episodes for the WWE Network, so I can’t give anything away except there was a lot of great action, from the UK and the world’s best superstars. A bit of North East pride had me cheering for ‘Primate’ Jay Melrose.  A highlight was also the women’s battle royal. If you know anything about the current wrestling scene: you know the women’s division is better than ever. On a side note, I seemed to spot a lot of NXT UK stars watching bands over the weekend. It’s great to see these athletes we watch on TV enjoy the same bands we do.

Back to the main stage and Behemoth have their pyro lined up for their epic show we have seen on tour and on other festivals. Behemoth is in line to be the next Rammstein in terms of the extraordinary pyro they use. It’s not all about the hot, hot fire though – Behemoth has this black metal thing down to a tee.  There’s a very good reason they are the most respected extreme metal act on the planet.

Meanwhile, Japanese power-metallers Lovebites take the Dogtooth stage. I mentioned this last year but I feel this ‘stage’ is a waste of talent. So many great acts on this stage, yet too small to contain enough fans. Plus the sound is not great either. There are bigger tents in the campsite. No joke. Anyway, Lovebites, in a nutshell, are an amped up version of Dragonforce or in a way: Iron Maiden. But they are all Japanese women. The musicianship is flawless and their presence is as impressive as anyone on the main stage. “We are Lovebites and we play heavy metal!” exclaims vocalist Asami. This set is only 25 minutes long and feels like it should be longer. Lovebites were upgraded to the main stage at Bloodstock last year through being in the right place at the right time. Lovebites should be on the Download main stage for their talent alone. While I’m at it, get rid of this stage, bring back the Pepsi Max stage. Much better.

Back to the main stage where the heavens open again. Luckily one of the brightest and most entertaining bands on the bill are about to adorn the stage. Fair enough, Skindred has played every other Download in memory but they deserve it. They always put on a great show, bringing together a lot of styles and genres. From the start we have ‘Pressure’ with a breakdown of ‘Back In Black‘ (AC/DC), followed closely by ‘Machine‘ with help from Reef front-man Gary Stringer. This, plus all the banter from vocalist Benji Webbe with samples and all from 2Pac to The Prodigy – a great tribute to the late Keith Flint. This sandwiched recent single ‘That’s My Jam’, pitting sides of the crowd against each other. Finishing with the all-important ‘Warning’. Why is it important? Two things: this is a song that features one Jacoby Shaddix of Papa Roach, also this is the song everyone does the ol’  Newport Helicopter to. First off, no guest vocalist, sadly, Skye from Sumo Cyco is still on site. Seeing as Benji didn’t join them on stage I thought we might get that here. Nevermind. Least we get to do a massive Newport helicopter then. Yet it’s raining. A good way to shake out your rain poncho! Overall a mega-exciting performance and they are welcome back any time. No wonder they leave to ‘Nobody Does It Better’.

A little bit later on the Zippo Encore stage, we get returning heroes Halestorm. Their 2018 album Vicious was extremely well received by fans and critics alike. This is a band with a rich back-catalogue and has possibly played every size stage at Download. They could easily be on the main stage right now but instead, it’s ‘wacky’ hip-hop duo Die Antwoord.  Yes, that’s the reality we live in apparently. The main attraction here is Lzzy Hale’s voice. She can really belt out the tunes, this set is absolutely stacked and closes the Zippo stage nicely. The set ends with Halestorm being joined by Asami from Lovebites, to do the track ‘Love Bites (So Do I)’ – I mean what else? The band is named after this track. Quite an interesting collaboration. Closely followed by ‘I Miss The Misery‘, the number of people here and the importance of this band – they should have really been on the main stage. Still a great show.

Finally, last but not least, is tonight’s headliner. A band who personify Download, a band who have evolved in the 24 years they have been around. Of course, I’m talking about SlipKnot. One complaint about Corey Taylor and co. is that they seem to play the same set at every festival they do. With new material on the horizon, and a line-up adjustment – that doesn’t look like the case tonight. Being the 20th anniversary, one would think they might revisit the deep cuts from that album. Instead, they come out to the intro of Iowa – ‘(515)‘. Followed by ‘People = Shit‘. This is already a winner. The band have a new look and new stage set up. The new masks are mainly amazing, especially Sid Wilson’s moving mask and hood. Corey Taylor’s still looks a bit odd, even if it is similar to Heath Ledger as the Joker. We still have no idea who ‘Omelette face’ is though.

The unholy nine waste no time in getting into their latest track ‘Unsainted’ following with favourites like ‘Psychosocial‘, ‘Before I Forget’, and slowing it down for ‘Vermillion’. Not long before we are chanting “We are not your kind” along to ‘All Out Of Life’. There’s a reason SlipKnot has headlined Download more times than most the bands here this weekend: they are awesome. They know how to put on a good show and appeal to a large fraction of the Download crowd. Ok, we are missing ‘Wait and Bleed‘,’Left Behind‘ and a few other tracks but this is a fantastic set as it is. The highlight of the whole year already.

So there it is the biggest chunk of Download 2019 over. Possibly the best day too. Sunday features closing band Tool (don’t have a pun for them, sorry) as well as the likes of Smashing Pumpkins, Enter Shikari, Slayer and more. Keep an eye out for the Sunday highlights. As well as a fully fledged review in the next issue of RAMzine, as well as interviews on ramzine.co.uk and our YouTube channel.