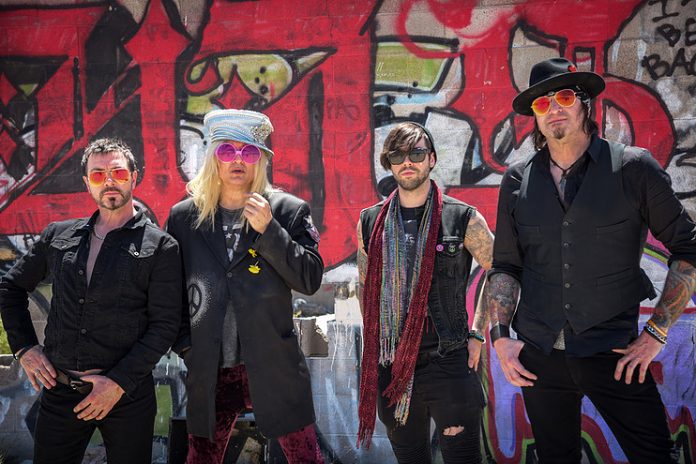 Hailing from Chicago, Illinois – hard rockers Enuff Znuff are back with their latest release Generation Brainwashed – featuring a host of famous guests such as Ace Frehley, Daxx Neilsen, and Steve Ramone.  Originally founded in 1984 Enuff Znuff soared through the charts with hit singles ‘New Thing’ and everyone’s favorite ‘Fly High Michelle’ – a true masterpiece of its time and described as ‘The Next Big Thing’ in the 90s.

Founding member Chip Z’nuff and fellow bandmates Tory Stoffregen, Alex Kane, and Dan Hill are very much keeping the original sound alive in 2020, a good following from 2018 release ‘Diamond Boy’ which pleased a hoard of die-hard fans at the time, and they won’t be disappointed now.

Each track is pretty similar, ranging from being a little bit hard rock and a little bit psychedelic. Think The Beatles with a little more drop tuning and a lot more LSD. There is something oddly comforting about the hushed, soft vocals and echoes that compliment the upbeat melodic theme. We have some seriously rockin’ solos in single ‘Fatal Distraction’ – which emphasises the way the band has aged like a fine wine, even post Donnie Vie era.

Opening instrumental track ‘The Gospel’ is beautifully composed, setting the tone for the beginning of your trip…or the rest of the album! ‘I Got My Money Where My Mouth Is‘ and ‘Help I’m In Hell’ are slightly rockier, very soft, and almost early 00s indie rock. ‘Its All In Vain’, ‘Go’ and ‘Winding Road’ are slightly same-y, full of soothing “aaaahhhs” and easy listening, but one after the other could potentially be tedious and it’s definitely not a party album, but something tells me that was the point. Tracks such as ‘Drugland Weekend‘ and ‘Strangers In My Head’ pack a little more bite, but more of a Jack Russell pinch than a Great White chomp.

If it’s a catchy rock album with a vintage vibe and a dreamy soft hue that you can almost see if you listen hard enough, this one’s for you. If you are clinging to the expectation of it being much akin to their glam days, stick to the 1989-1991 stuff.