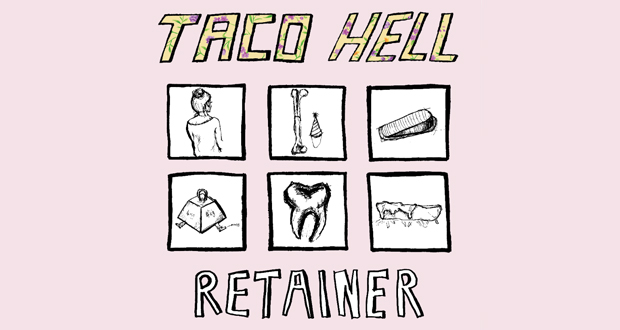 The idea that music has to be perfect is a plague on rock and roll. Over-produced and over-played albums have seen the genre lose its sense of freedom and in 2017 a lot of bands don’t even sound like bands. Instead, they are a selection of perfectly formed pieces slotted together. The flat pack furniture of the musical world.

All of which plays a big part in making something like Taco Hell so damn refreshing. The six tracks on Retainer sound like they were recorded in someone’s basement. It’s slapdash, and you can hear every strum of the strings on these guitars, and that makes it all the better.

Of course, that would mean nothing if this wasn’t also an excellent collection of indie punk songs. ‘My Mother Wouldn’t Approve’ opens with the declaration that ‘I don’t really like people, but I have to speak to them’ setting out its angsty themes from the start. You needn’t worry about it sounding too whiny, however, as the vocals and guitars have a desperate edge to them.

The EP then slips seamlessly into ‘Palaeontology (Happy Birthday David Schwimmer)’ which picks up a delightful little melody to kick things off. Eleanor Parkinson’s vocals come in, and their airy feel contrasts with the previously mentioned desperation of Joe Booker. They are the yin to the other’s yang and both work to make the other sound all the better.

If you glance at Taco Hell’s Facebook page you’ll spot their assertion that the funny name is to cover up the sadness. A statement that extends nicely to their music. For all the catchy melodies and sing-along choruses, there is an air of melancholy to Retainer. The chorus of ‘Wait For Me’ may be perfect for shouting along with, but it also sounds like a cry for help. Elsewhere, lines like ‘I lie awake all day wondering about words and what to say’ are hardly skipping for joy despite their musical accompaniment.

Taco Hell write brilliant songs. You can say a hundred things about Retainer, but it all comes back to that. They hook into your brain, and the second you reach the end, the overwhelming temptation is to start all over again. If a future album is half as good as this EP, then they will be well on their way to cementing themselves as your next favourite band.