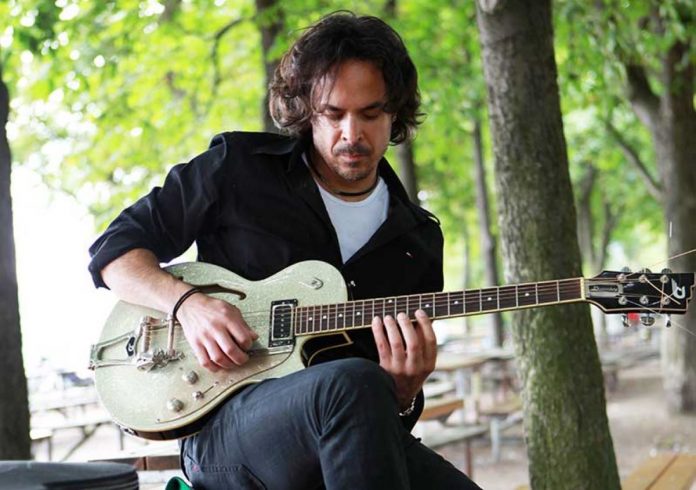 Former T-Ride guitarist Geoff Tyson having been pre-occupied producing music for film and TV for a while now, took time out to record his first instrumental guitar album Drinks With Infinity.

A former student of Joe Satriani, he’s wont to opt for some over-the-top techno flair, as is a pre-requisite in the shredder’s bible. That stated there are some vintage Blow By Blow/Wired era Jeff Beck influences, and that’s nothing to be sneezed at.

With instrumentals you always wonder if their titles they’re meant to reflect the emotional intent of the composer or simply an afterthought. Either way, there are some rather fun words used in conjunction with a quite a few of the tracks presented on Drinks With Infinity, ironic or otherwise.

The whole affair kicks off with ‘Six Weeks Of Tina’, an up tempo boogie with enough shedding asides and a little fusion moment all packaged in a palatable manner that won’t offend the mainstream listener should a non-rocking family member be passing your music system. Whereas, ‘Shag’ is all prowling beefy riff with techno bits bolted on the side as melody accompaniment even as a solo plays over the top.

Nuanced pinched notes in a curious blues manner play over a funk strut on ‘Strawberry Napalm’. It speeds and slows getting into a more fusion like state with fluid guitar runs, raging more wild-and-free near the end. Matters slow for ‘Like life Is Set In Stone’, a ballad in hyper-driven mode allowing for synthesiser effects and sweeter noodling guitar to stretch out.

‘Bark’ has an undulating riffed guitar sound that gives way to sketched-out chords and runs, then a little boogie-come-fusion trashing away once things gets underway. ‘Asabara’ features harmonics, clipped chords and a high noted sustained lyrical guitar line in a kind of John McLaughlin/Beck subdued manner before driving out into to a proggier excursion.

‘Monkey Love’ is pretty ace.There’s this sci-fi mission/adventure feel pounding away in the rhythm, with squeaks of mystery, minute dancing asides and wah-wah questioning and harmony guitars. Like I say, is the title supposed to reflect the music? Despite its claim all-instrumental I’m sure there are harmony vocal line repeated on this one, but try as I might I can’t quite make them out, maybe they’re just sounds for effect… Or monkeys making love? There are splashes of very colourful guitar shredding legato playing, dancing the light fantastic in its upbeats. Back to my sci-fi analogy, this would work well as soundtrack for some French bande dessinée adapted for the movies.

‘Freckle’ is an odd techno muzack shuffle of the kind one might see accompanying some IT consumer advertinterpolated with heavy thumbed funk bass and scouring Beck like sonic lines and wails amid more obvious Satriani tweaks. ‘Are You With Me’ is dusty effect drive acoustic and electrics promising sunny beaches and brittle romances, and finally ‘Liquid Kitty’ is slow techno pulse, with guitar and synthesiser honking over the blues by way of Tangerine Dream drifting into more echoes fuzzy explorations and direct jazz fusion beats.

Drinks With Infinity wears its influences, but they’re pretty good ones for the most part, and a very pleasant aural diversion to the doldrums of the life we’re living during this coronavirus pandemic.

For more about Geoff Tyson at RAMzine click here.