GONG – On Track: Every Song, Every Album 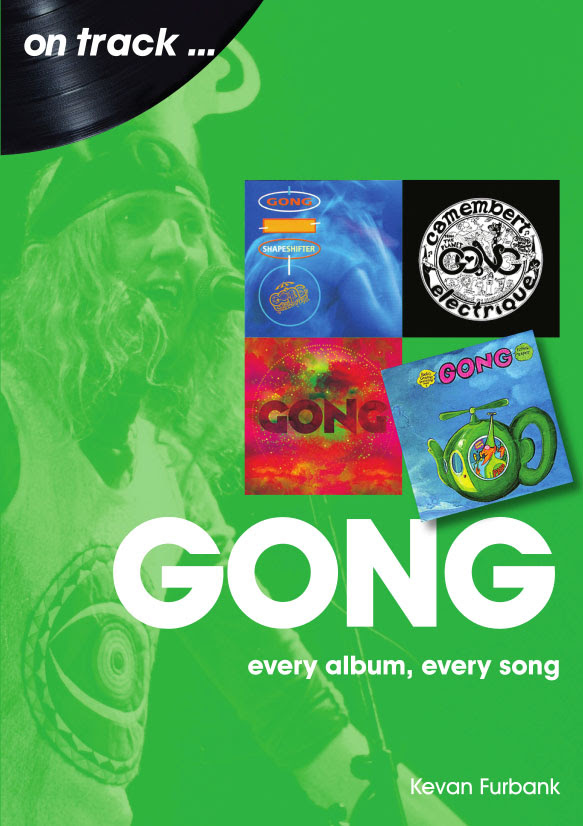 Not too many bands can ever claim to have come from their own planet, or to create their own universe, but so successful were Gong in evolving their own identity and creating their own niche, the ‘Planet Gong’ emerged. Musically and spiritually Gong emerged from the whimsical imagination of founder member, Daevid Allen, an Australian who’d travelled to England in the early 60’s to check out the beatnik scene – eventually meeting up with Mike Ratledge, Kevin Ayres and Robert Wyatt, who formed the Soft Machine, inadvertently becoming instigators of ‘the Canterbury scene’. They then went on alongside the embryonic Pink Floyd, to become the house bands of the late 1960’s underground.

This book is a testament to the assiduous research of Kevan Burnatt. It’s an enormous labour of love which must have taken God only knows how many hours of patient listening and researching to put together. The attention to detail is considerable and, if you’re a Gong fan, you’ll find many more snippets of insider knowledge, band minutiae and more surprising revelations about Gong than you ever imagined. I’d no idea, in 1976, Gong had talked to Peter Gabriel about his joining the band just after he’d left Genesis!!

However, the further into the book I read, the more I wondered whether the sheer amount of detail included about a band like Gong, as interesting as it is, served any purpose. Don’t get me wrong, as a Gong fan of sorts, I very much enjoyed reading the book, learnt a few things I’d not known and I’d heartily recommend it. But I wondered how many Gong fans would really be interested in learning, on a track such as ‘Fohat Digs Holes In Space,’ (from Camembert Electrique), “the song opens in E minor, back up to D flat, then down a bit to B, down to D flat and then further down to G ..and then it all starts again”.

But, where this book does serve a very useful purpose is in illuminating the stories behind the characters, including the hippie prodigal son ‘Zero the Hero’ and ‘Mista T Being’ as well as the origins of the ‘Pot Head Pixies,’ plus the story behind their early seventies “Radio Gnome Invisible” album trilogy, Flying Teapot, Angel’s Egg and You. (If you’re unfamiliar with Gong, these are your starting point). It was here, as the author explains, Gong’s fixation with Cheese changes to tea .. tea being of course a euphemism for Marijuana. This was Gong’s golden period and some of the more interesting and fascinating sections of the book are to be found during this time, as this was when the band was at its zenith of creativity. The story about the flying teapots and the music accompanying it is revelatory, with the bands communality and spirit helping to produce some remarkable music. For all their hippy-dippyness, everyone in the band could play.

However, just after Gong released You in 1974, what was referred to as the ‘crisis of splittingness’ strikes when, first, Daevid Allen leaves the band (the story of how he came to leave is somewhat amusing) to engage in several interesting musical offshoots, like Daevid Allen and Euterpe. Soon after followed by Stevie Hillside Village, who went on to achieve renown as a solo artist with albums like Motivation Radio and L. Drummer Pierre Mourlen also leaves and synth player Tim ‘Moonweed’ Blake is asked to leave.

At this point the book becomes a little less interesting as, whilst Gong continued to gig and make albums, and still do, the absence of the spirit and vision of Daevid Allen meant the band no longer had a guiding purpose. There’s probably even a case for stating the book should have stopped in 1976, before the Shamal album was released, as Gong became essentially a different band after this. At that point they had different musical directions which resulted in a series of good, albeit patchy albums, and constant personnel changes, resulting in a series of ongoing inter-band tensions. Even if some stellar musical talent briefly passed through the band in the process, notably Daryl Way, Mick Taylor and Allan Holdsworth. But this is just a minor quibble and isn’t to denigrate what turned out to be an enjoyable read about one of the more quirkily eccentric and ethereal bands of the early to mid-seventies.

Gong are (even now) the ultimate cult band in the eyes of their fanbase. They certainly left their mark on the times, with ‘Rolling Stone’ magazine declaring You to be one of the 50 greatest prog albums of all time, and the current incarnation of Gong, led by Klaus Torabi, still performs ‘Isle of Everywhere’ from the album.  So, if you’ve never Glid along the Oily Way in a Flying Teapot before, this book’s your opportunity to do so.