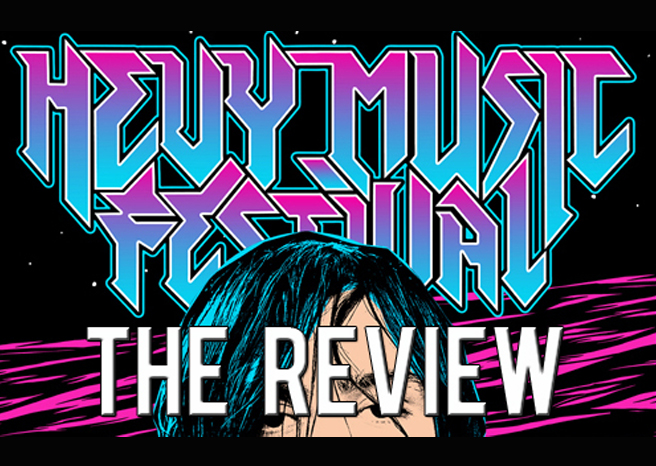 If I could sum up Hevy Fest 2012 in one sentence… I’d be out of a job, but more importantly I’d be doing this year’s festival no justice what so ever. In the run up to the festival I was deliberating the chances of a niche line up along with forty days and forty nights of torrential flooding and squelchy underfoot boggy fields, by all accounts however, I was proven wrong. The sun shone gloriously on Team Rams arrival to the fest, and carried on throughout the course of the whole weekend, only sprinkling the odd shower of a morning to wash away the booze fuelled regret from the night before. A few band members we met had fallen victim to sun burn, as well as some dehydration that was not of the self-inflicted nature, but none the less the sun had his hat on, and presided to bring the crowds with him.

Friday exploded into action with Pop-Post-Hardcore outfit Never Means Maybe warming up the Redbull Bedroom Jam Stage. Their set was a perfect opener to the fest showcasing a varied range of tempos and musicality that really set the tone for the rest of the day’s performances. Towards the middle of the day, Scottish metalers Bleed From Within raised the roof with an energetic and crowd shaking show that had my Editor nearly deaf in both ears. The end of the day saw Deaf Havana and Deez Nuts bring equally great sets out of totally different genres. One brought a softer musicality to the stage while the other shook the ground with their nu-metal bouncy hardcore styling’s. The best performance of Friday night was brought to you by the Lower Than Atlantis boys, playing all the hits of course, but breaking the set up with a brilliant medley of Foo Fighters songs (including Everlong) that really seemed to resonate with the crowd. The whole of the band were brilliant in their performance and really took command of the festivals first night.

The Saturday was billed the most hotly anticipated day of the festival, and the day didn’t disappoint. A Wilhelm Scream got the crowd jumping with their power-pop-hardcore style, followed closely by Municipal Waste who never ceases to amaze a crowd with their analogies of how hard they can rock, quoted as saying, ‘This next song is gunna rock so hard that Jesus’s face will melt off!’, a task that they undoubtedly managed to do. Meshuggah turned it up to eleven on the volume control, and expertly turned the crowd into a sea of math metalers in a guitar chugging trance, while Glassjaw on the other hand showed brilliant musical capabilities and really showed off their feathers with a great stage presence.

The headline act for Saturday night was of course Andrew WK, controversially I will say that I’m not a huge fan of his music, but no one can doubt that the king of partying hard knows how to put on a stage show. His crew were on form for the whole performance, and the tent erupted into an anthem fuelled hoedown that Andrew can be proud of. The one surprise for me as a punter was Andrew’s musical capability, he plays the piano like it came out the womb with him and he knows the guitar like he knows his was round a party. He is a commander of the stage and although is considered a one hit wonder, his performance that night was one not too miss. The best band of the Saturday night however had to be Norma Jean, the tent was packed from front to back, left to right, and in this case up and down as well with people riding on the shoulders of others. Their set could have been considered a ‘best of’ record with the band playing songs that they hadn’t played live in over seven years. It was certainly the best sounding performance of the whole weekend too, all their instrumentation was clear to the ear and the vocals rang through like a live vocal should.

Sunday unfortunately saw a lot of the crowds from the previous two nights disappear. The not so hotly tipped day was a sad anti-climax to the weekend, mainly because there were still plenty of great bands billed for the Sunday that didn’t meet the appeal of the viewing crowds. Mallory Knox awoke the stage Sunday morning with their take on the heavy genre, proving once more that for a band that have not yet had a full length release, they can rouse a crowd to sing all their songs. The Knox boys seemed incredibly humbled by the pit at the front of the stage, chanting along to their style of alternative rock. Having spoken to bands and artists all over the weekend, it was clear to find out that their choice of bands were Landscapes and Listener. Both bands packed out the Redbull Bedroom Jam Stage with at least rows of seven to eight people out of the tent, and by all accounts gave solid immersive performances that will be memorable for months to come.

Descendents were decidedly good for all of their set, even with the strange instrumental stabs between songs, but it was the guys of Hundred Reasons who stole the show on the Sunday evening. Their set was incredibly nostalgic to plenty of audience members who were there, but seemed to inspire plenty of kids who didn’t know them to join in the dancing at the front. Classic songs like ‘Silver’ and ‘I’ll Find You’ created the kind of happy go lucky atmosphere that this band emits. The Sunday proved to be a big success for the Redbull Bedroom Jam Stage, bringing in a larger audience for most of the day due to the lack of interesting and well known bands on the main stage. There was one band that I feel was thee band of the festival from my point of view, this New York meets L.A outfit Night Verses plays upon the old school sounds of Deftones and At The Drive In to create a brilliantly atmospheric and musical band. They are certainly a band that everyone should catch and definitely one to watch for future UK performances.

Having previously been speculating about rubbish weather and a diluted line up, I was pleasantly surprised over the entire weekend about both these factors. The organisers of Hevy Fest 2012 did not disappoint in terms of billing or organisation over the whole weekend. This niche little festival has come on leaps and bounds since its creation four years ago, and is sure to be even bigger and better with next year’s billing. If you’d like to find out more about Hevy Fest 2012 visit the photo galleries of ramzine.co.uk, our Facebook page, and our youtube channel to see all the best from this year’s fest.

We Spoke to Mr Andrew WK at the fest check out the interview here: