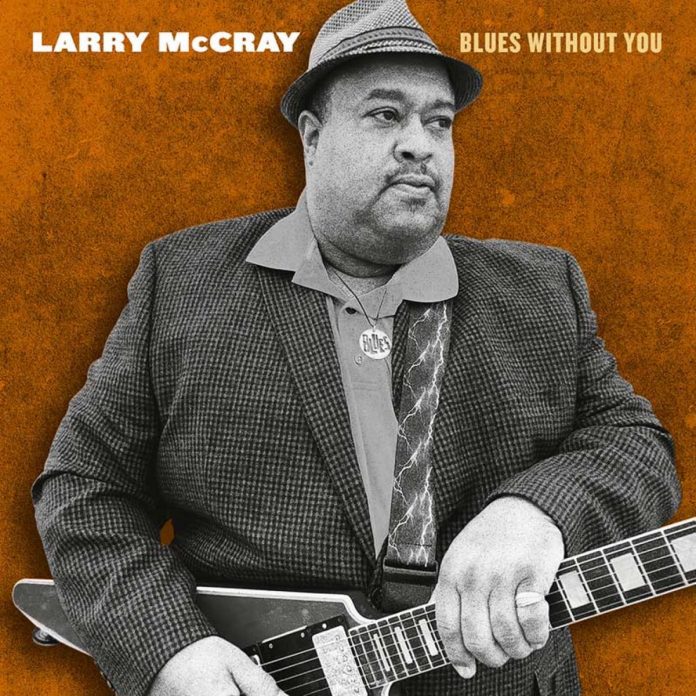 Larry McCray’s in his sixties, life’s not been easy. He’s fell through the cracks a few times, personal hardships, dark moments and more besides. They say you need to have hit rock bottom to play the blues with sincerity, I don’t think that holds true these days, but it does offer some perspective being able to talk from personal experience.

Fortunately for McCray, a good woman came his way, and life began to get better. His career however needed some push. Enter Joe Bonamassa, who co-produced this album and put it out on his KBTA label. Goodwill gestures to one side, Bonamassa’s made all the right moves in making this a fully-rounded record, and bringing to our attention a talent previously little known over here.

A potent force on guitar, Larry McCray, proves to be a skilled songwriter and a genuinely emotive singer.

The album very much puts me in mind of the late BB King’s Take It Home album recorded with The Crusaders in the late 70s. you get that straight away with opening number, ‘Arkansas’ where the swinging brass section is loud and proud, up tempo with ripe rich guitar cutting through. It has McCray reminiscing about his childhood, and was released as the first single from the long player.

McCray’s guitar bleeds through intermittently throughout, and the tone remains captivating. That there are photos showing him with Flying V Gibson in hand come as no surprise when you hear his playing – It bites just the same way blues legend Albert King, Wishbone Ash‘s Andy Powell or UFO‘s Michael Schenker have when they’ve played that particular axe.

As we shall find, there’s something of a storytelling flow, as evidenced by a number of the song titles. ‘Without Love It Doesn’t Matter’ is a piano-based old school blues, with the kind of snail pace pacing most producers would be motioning you to hurry up on, but a wise choice has been made here and McCray’s voice sends me on this one – While he really has a commanding voice, he is also able to caress, cry out in pain and make you listen compassionately to his story.

‘Good Die Young’ returns us to the nightclub blues feel of the opening track, and McCray is playing uptown in style here, featuring as it does a cheeky little guitar solo that mildly walks forward and makes you smile. “They say the good die young, then why am I still here? he sings, and my reply would be to make this album, sir.

Another recent single, ‘Down To The Bottom’ guest features Gov’t Mule and Allman Brothers Band guitarist Warren Haynes. It starts deceivingly simple as an effectively slow Americana blues number, sung earnestly. Mainly acoustic, with a gospel harmony swing, the horns somehow evoke the proud melancholy evidenced in North English brass bands rather the sweltering sounds of Stax, prior to Hayes and McCray burning bright on electric six strings near the end.

If ‘Breaking News’ had featured over the opening scenes of some 80s blockbuster comedy you’d not have turned a blind eye – Another single, and naturally so, it’s a foot-tapper with added super Philadelphia-groove. Its upbeat sound belies the social commentary present in its lyrics. Rolling in easy like the afternoon freight train coming into town, a sudden blast of tenderly squeezed guitar cries out and grabs the listener’s attention.

‘Roadhouse Blues’ features squealing guitar over organ, McCray channelling both Freddy and Albert King, the way a young Clapton could. It’s very much very much a live setting feel, his voice taking your standard blues tune up a notch or two, as he phrases and emotes; mind you when he struts out on a peacock feather tail waving guitar solo, he’s got nothing to be ashamed of there either.

The rangy, upbeat mid-paced rocking blues of ‘Drinkin’ Liquor And Chasin’ Women’ is the kind you expect in a duet, and while it’s nice to hear Joanna Connor playing alongside him, it would have been nice to hear them exchange vocal lines too. ‘Blues Without You (For Paul)’ is a song about his late manager, one who reading between the lines might actually have held him back a little. There is piano, string orchestration and female backing here and once more it calls to mind the sounds of Philadelphia. Vocally, there’s a little Marvin Gaye at the higher end, some Isaac Hayes and Bill Withers with a bigger blues boom, and some Barry White without the slur and growl… Man, I told you he could sing.

‘Mr. Easy’ arrives in a slinky bumping bassline, and another BB flavoured nightclub blues tune. It’s a song about what others want him to be and do, when he just wants an easy life, alongside the rights and wrongs of it. With Bonamassa guesting on this one, we get some lengthy guitar excursions between the pair of them. It’s followed by ‘No More Crying’, that has a gospel touch in term of its lyrical themes, rather than its music.

‘Don’t Put Your Dreams To Bed’ is where, if we follow a Joseph Campbell narrative philosophy, the hero begins to find redemption, and is about to conquer his demons one final time. More importantly, as a stand-alone, it’s a good bump and grind groove befitting the title. I think we’re talking both the spiritual and a little of the ungodly here with the music, there’ some good female gospel backing on this one, not too far removed from the southern pop ladies Clapton had when he first toured solo in late 70s, whereas in soloing he heads out in the direction old Eric had lost sight of back then.

Drawing things to a conclusion, ‘I Play The Blues’ completes the circle. Stripped bare, with just acoustic and voice, it tells you all need really, a love song to a way of life.  A fitting way to end an album, and one I tip my hat off to. One also gets the impression is this is a live one take performance.

When Larry McCray sings, I believe his truth, and there’s no hiding he’s got one hell of a guitar sound. More please.