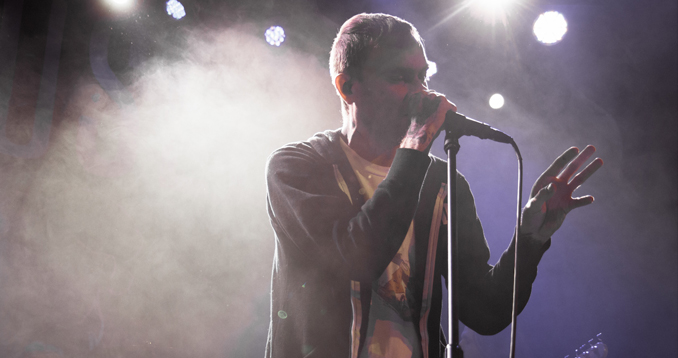 Well it’s been a fantastic gig tonight with the awesome support acts, Decade and Landscapes. Prior to the tour I had seen a press statement from Decade frontman Alex Sears saying “I think every band currently on the UK circuit would agree that [The Used] are a massively influential band so to be able to tour with them is an honour. Plus our mates in Landscapes are coming out too so it’s gonna be one big party!” So, I knew to expect something really fun, and these support acts were such good choices.

Decade kicked things into gear playing tracks from their 2013 ‘Good Luck’ album, which the crowd were very excited about! Alex Sears announced “Today is Valentines Day, Spread the love!” There was without a doubt a lot of love in the Academy 2 on this night. The crowd were singing along and dancing from the very start.

As usual Alex is hitting those notes without any problems and being a good chap engaging with the crowd keeping everyone happy, “Manchester are you having a good time?” he says, to which I hear a clear “Yeaaaaahh!!” from the crowd. “The next one is a slow one, so it goes out to everyone in love, so put your hands up in the air” says Alex as they play ‘Fake Teeth’.

There are always shenanigans with these chaps. They were a great choice for the tour and opening up the show. The melodic rock songs are a win win! It’s no wonder Decade are going places now, their hard work is paying off. They played some great tracks such as ‘British Weather’, ‘Brain Freeze’ and ‘Fool Gold‘. In a nutshell if you haven’t heard of them, go listen now!

Landscapes! No not the countryside, the band!

Well these are the near opposite to Decade but this is not a bad thing! Rather than groovy rock, its nutty punk/ metal. These nut jobs are running, jumping, moshing across the stage, cranking up the rock, then another gear into metal. Mix rock, with a spice of metal and punk and boom you got Landscapes. These crowd jumpers defiantly sped up the crazy atmosphere to appropriatly pumpping up the other fans, so when The Used come on they’ll explode into screaming fan girls.

Playing awesome tracks such as ‘Epilogy‘, ‘Embrace and Dream‘. Choosing ‘Paradox’ as the last song, I feel this was a wise choice to end the set, the crowd went bat sh*t crazy! It’s that good! If you are after a high energy show, look not further then Decade. Have a listen, get some mates, grab some booze and open this pit up! That’s my suspected sequence of events from tonight.

The Band we’ve all been waiting for… The Used! I have no idea how to describe their set other than holy sh*t. The room is left in suspense, it’s all dark and then we hear the electro. Before you know it The Used are on stage, and everyone has lost their sh*t. From where I was standing (the photo pit) everyone has gone insane! It was like the crowd was on coke or something, it was just mental! Everyone yelling and clapping along. Bert McCracken (vocals) the leader of this jolly event tells the crowd to get up! And of course they do!

“Of course we all f*cking love The Used, we are really glad to finally be back in Manchester, I hope everyone is excited as I am” say Bert.

He continues “You could have been anywhere tonight, but you’re here, we love you”, to which my ears blow to the mass sound of “Woooooo”. “How many of you have been hardcore fans since the very start?” says Bert as the next song is the absolute classic ‘I Caught Fire’. The crowd belt along to the chorus.

Clapping intensifies for ‘The Taste of Ink‘ shortly followed by ‘All That I’veGot’. It’s crazy just how many The Used songs everyone knows off by heart, this is demonstrated without doubt by the crowd as they sing along to ‘Burry myself Alive’ and ‘Revolution’.

The Used disappear from the stage to which the crowd go insane begging for more songs!

After a few mins Bert comes back and says, “You lot are f*cking sweet to us, you f*cking sweet hearts… One more song for you crazy assholes”. They played ‘Memories’ and even spoiled us with another track ‘Box Full of Sharp Objects’ which turned into an awesome mash-up of ‘Smells Like Teen Spirit’!

Well its been and incredible night and it sucks that it has come to and end. But here there have been three fantastic acts you must listen too.