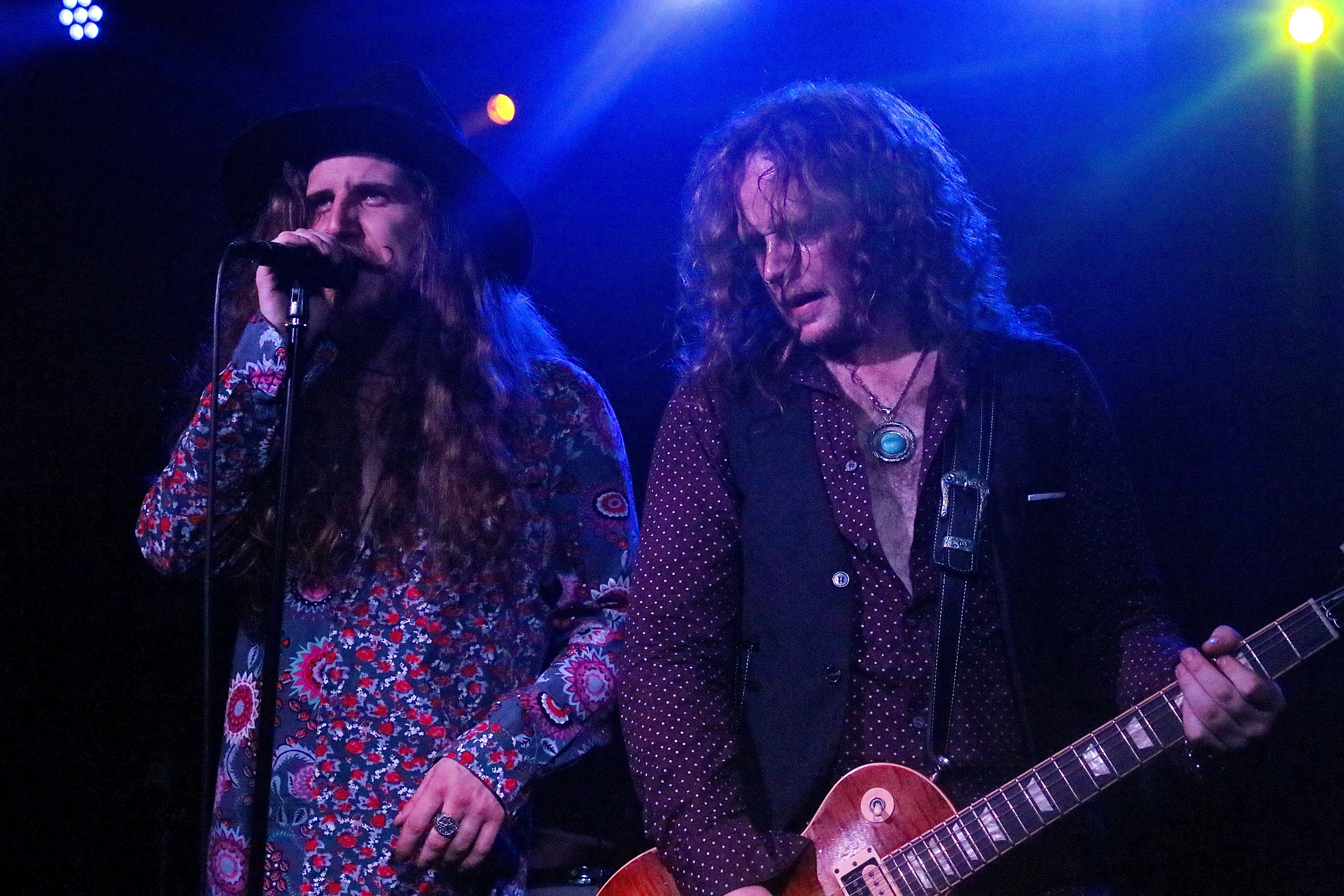 Late opening their doors, the bitter cold we suffered outside isn’t warmed by the reception received within: left confuse waiting in a room with a closed bar before then being directed upstairs. As many among us appear to be here for the first time, it’s unclear if this Fawlty Towers type service is par for the course at the Coventry Empire.

On stage already tuning up are MeMe Detroit and the three piece kick off presenting us with a series of tunes veering between heavy grunge and shiny alternate pop rock, each in the same number. They’re young, don’t look as if they belong in a band together – the drummer’s short haired and neat, the bass player looks like he belongs in a thrash band and the punky female vocalist/guitarist wears red Adam Ant war paint. Musically, while I’m undecided about their doomed Goth version of Bowie’s ‘Ashes To Ashes’ their own ‘How She Runs’ captures the old Dame’s Berlin period rather well (with the singer also playing synthesiser), and ‘Roses’ is a persuasive psych-ballad building to a Velvet Underground-inspired level of riff-based distortion wherein the lady leaps off the stage and continues to make a noise.  They finish with a punk-fuelled number, leaving us entertained but still a little unsettled by our surroundings. Collectively with a hive mind we the audience take in the moments between set changes to grab a drink, look around the merchandise stands and begin to get excited about what’s going to happen next.

The impression got is that most people are here for Bad Touch and look incredibly surprised once Mollie Marriott starts to sing. They expect to be sitting several rows back in an arena watching a voice of this power, precision and range so are rather chuffed that she’s up close and delivering such a quality performance. Stripped to the bone with just rhythm section and guitar, this is a much rawer set than her Truth Is A Wolf album would have you perceive – It’s like the emotional soul that carried Free dipped in grunge and then made contemporary. They start with the album’s title track, her voice warm and drawing us in, even as our attention is drawn towards a screeching guitar solo as the song rocks towards conclusion. They follow with a version of the beautiful ‘Broken’ that bumps and grinds in dark sensuality even as her voice soars heavenwards. Next is a new number, tempered hard rock with melodic extensions. In between songs we get friendly banter and while the band play she appears to seriously get off on their sound, dancing and pulling faces of admiration. This is about music but we also get personality.

Judy Tzuke co-write ‘King Of Hearts’ has a R ’n’ B vibe. One none of those bling-adorned hit single madonnas could manage if their melodramatic lives depended on it: This is from the heart, from the soul; a sound born in the USA then left to die; but resurrected with spirit and gusto here. New number ‘Tom Petty’ follows swiftly and is presumably dedicated to him though some of its lyrics sound far more personal  than observational, it rocks at a pace throughout, getting progressively louder as the guitarist lays into an inspired raging solo. He follows this with a power chord introduction to ‘Transformer’ that pays homage to Hendrix’s ‘Little Wing’ and sustains like crazy later.

As the drums hit out hard and clear, bass and guitar fuzz in preparation, with Marriott holding her hands above her head clapping and getting us to join in on what will be the evening’s final song from the band. Tonight, album opener ‘Control’ bids us goodbye swinging with a country & western savoir-faire one minute, grungy blues rock the next. Vocally, with the guys in the band adding harmonies we also get gospel and soul but above all a voice that’s as charismatic with its last note as it was from the first. Too short a set, because the evening started late, but there are folk here who will travel to see her again live, and indeed congratulate her on her performance as a brisk trade in CDs and the like takes place at her merchandise stand but a few moments later.

During MeMe Detroit’s set, Bad Touch’s Stevie Westwood was seen coming up the stairs, followed by three women. Very rock ‘n’ roll. Now that we’re all a little warmer and anticipating the main event eagle-eyed nosey parkers also note that half of Broken Witt Rebels along with their singular female companions have entered the building, the bands having toured together earlier in the year.

‘Take Me Away’ opens with Deep Purple style bang and crash, Bad Touch poised on the frontline of the stage, then back off headbanging away as Westwood takes the microphone. Without respite they are straight into the boogie rocking ‘Good On Me’, George Drewery giving it heavy on the old cowbell while bass player Michael Bailey makes out like a cross between Whitesnake’s Neil Murray and Iron Maiden’s Steve Harris pumping away and pulling out melodic phrases while towering at the front of the stage during ‘Sweet Little Secret’.

Glendinning evokes a droning wash of sound on slide guitar as Westwood takes up a tambourine, the audience claps and the song becomes upbeat, Bailey’s bass again ruminating as the drums attack and drive the heavy blues gospel of ‘Wise Water’. Next they give us a brand new song, ‘I Belong’ with Glendinning’s bottleneck melody playing over the soul rocker as Westwood phrases with the kind of gusto one usually uttered by the likes of Chris Farlowe.

“We’ve never been to Coventry before!” The singer exclaims, and some of us ruminate on whether that might not have been a good choice, recalling our late entry to the Empire. They then play ‘Down’ written when they were “19 or 20”. It sounds fresh to these ears, broken chords turning to an upbeat rave as the musicians make good use of the stage. “Going to give you a little loved song,” declares Westwood next only for a planned acoustic set to be reduced to ‘Something, Someone’as the sound system starts to play up, he and Glendinning playing without any amplification, but it coming back to life in time for Drewery’s harmony vocals to chime in near the end.

If someone’s working the PA they appear to be doing it to one side of the stage. Whether such problems have caused tonight’s delays I can only hazard a guess. Seekings whose right hand sent chords resounding round the room and was the very essence of what the band’s bones were built on when I saw them earlier in the year has had a sharper attack to his guitar tonight but now its earthiness is restored. The boogie stomp of ‘My Mother Told Me’ rocks out, Glendinning inflecting cool and tasty licks in the manner of Jimmy Page during his extended solo, the audience’s bobbing heads transfixed.

‘Take Your Time’ seems an odd choice of song to play this late in the set, as it can be rather dour if you’re not in the mood for its serious refrains. Tonight they give it the inspired musicality and vocal delivery of early 70s act Patto. “Righto, cowboys,” roars Westwood following the applause generated on completing the number as Seekings chimes in with the broken chorded entry point of ‘Outlaw’. Hard driven in a place where The Black Crowes meet with Bad Company, the band stage front as the audiences’ heads bop, Glendinning dipping in with Kossoff sweet licks before it comes to an end.

Suitably psyched I’m in the mood for my favourite Bad Touch song ‘The Mountain’ only to realise time is against us and they aren’t going to play what’s become an epic. Flustered, I can only take respite in the fact that Westwood’s calling out for Mollie Marriott to join him on stage. Then there’s panic, and alarm… Followed by a voice calling from down the stairs, “I’m coming!” as the leather-jacketed lass ascends and the crowd parts to let her pass as the band mockingly fill time with slow 12 bar blues jam on the stage she’s about to step back onto.

“In my defence they changed the set and they didn’t fucking tell me!” she tells us. Westwood looks at Seekings: “Didn’t you tell her?” “I couldn’t find her,” he declares nonchalantly. “Are you getting back at me?” asks Marriott. The audience are in pieces as it’s revealed she’s been playing them up all tour long, hiding their mobile phones and possibly more fiendish acts. The set changes however all seem to be a result of whatever’s delayed events tonight. And so we get to ‘Baby Get It On’ the Ike & Tina Turner cover their recent successful single together. Tonight the song feels lived in; it’s as if Ronnie Wood had joined Whitesnake for a rousing sweet little rock ‘n’ roller. Vocally it’s a rush, Westwood and Marriott trading lines, spurring each other on, and bumping backsides against each other. An excellent fun few minutes before following applause the lady vanishes.

“Thank you from the bottom of our hearts!” says Stevie Westwood as they go into their last number. The slow lurching blues beat causes a few confused faces whereas those of the Broken Witt Rebels who were dancing but moments ago now have their jaws practically dragging the dance floor. The tune being played is their radio hit from earlier this year, ‘Low’.  Rolling about with laughter on stage and off, it’s time to rock us home and the boys do it in style with their own ‘99%’ single from the Truth Be Told album.  It cracks like a whip and smarts around the edges as Bailey plays a bass solo underneath Glendinning’s wailing six string then before you know it with guitars raised high they finish to raging applause.

For those who can there’s more chit-chat at the merchandise stand and ale to be supped, for the rest of us there’s only the promise of the night’s cold air as we exit down those stairs, make our way out of the city and home to our own where we can sleep peacefully knowing – that on the whole – rock ’n’ roll dreams were made for nights like this.