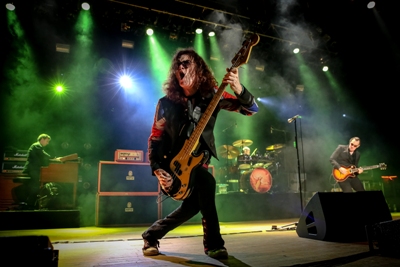 I can trace my Black Country roots back to the 15th century. It’s not so much in pride as defence I declare this to a woman from West Bromwich who’s got a thing against “Brummies”.  In fact it’s incredibly territorial in Wolverhampton tonight, there’s a tall bloke proclaiming loudly: “He’s one of us and comes from Cannock!” That Glenn Hughes has probably been living in America since before the guy was born doesn’t really matter, there’s a more serious debate going on about why Robert Plant supports Wolverhampton Wanderers who are also playing tonight.  Eventually the West Bromwich lady will declare “It’s alright, we’re all yam-yams together!” and peace will once more endure. Those visiting from outside this strange and colourful locality will find this all as inscrutable as the Enoch and Eli jokes that proliferate the air, but suffice to say it may go some way to explaining the arguments that passed back and forth between the members of Black Country Communion during their musical hiatus and how they’re now back on course together. 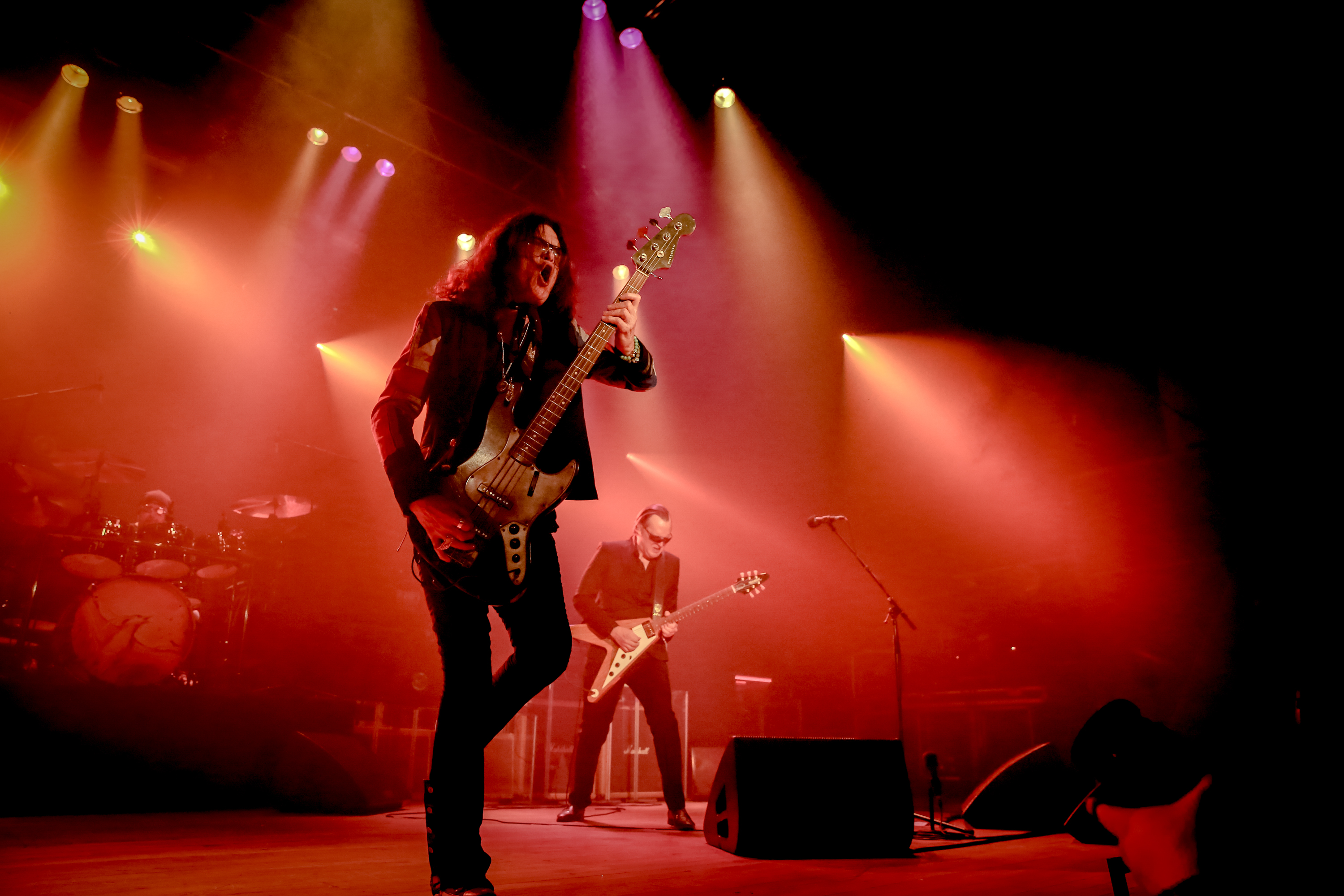 Orange and Marshall logos affixed across the backline of amps act as public endorsement that we are about to witness a rock show, a classic one, and that it is likely to be loud and in your face. Frankly the PA hanging either side of the front of the stage doesn’t look as if it too will be able to do similar justice but when the roadie sits behind the drum kit and gives a single kick to the bass drum that echoes like thunder we feel safe that the gods of rock are looking down favourably on us and once more a man named Bonham will be seated on his throne. Then, as an air raid sounds out we begin to wonder if we’re all going to have to be escorted out of the building.

White spotlights circle stage and audience as the siren wails away, crashing noises hurl out of the PA and back lit amber lights project out at the audience who are raised in voice as four men walk on stage. That the pensioner from Cannock among them looks just like he did in promotional photos for when he joined Deep Purple back in ’74 with his long curly hippy locks and sunglasses is impressive, that or the audience has itself succumbed to vanity and forget to put on our own collective spectacles. 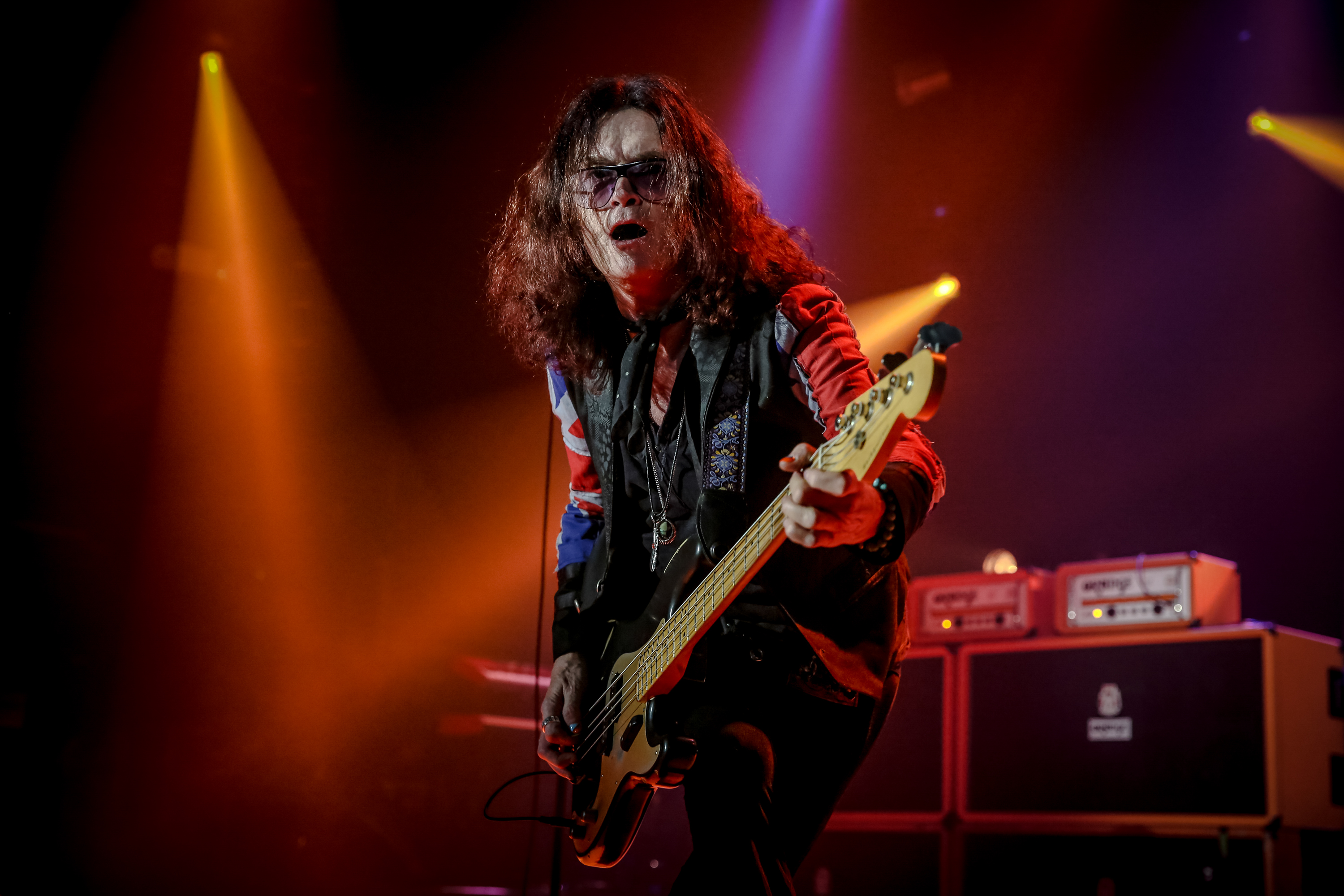 All sun glasses, beanie hats and sharp-dressed suits, Black Country Communion offer us a barrage of ricocheting staccato notes we get the gist of ‘Big Train’ but its purely taster and they swagger hard into ‘Sway’, Sherinan not reaching for his keyboards until the song reaches its first middle eight. The stage is smokey, less dry ice, rather the amps heating cold air one suspects. Hughes bounces around the stage, his bass playing stupendous but digging in and stepping to one side of the stage as Bonamassa solos and Bonham hitting his skins harder and harder as it draws to its conclusion.

At this point our focus shifts stage right as the spotlight picks outs Sherinan’s quieter piano section before one last round of riffs. Without hesitating Bonham solos on what becomes the introduction to ‘One Last Soul’, Bonamassa now sporting a Flying V while sounding uncannily like Blackmore at pertinent moments during this number, for which he’ll deliver two speedy and intricately noted solos, while Sherinian will interchange chiefly between piano and organ, all the while the stage bathed in blue light. In the songs latter part there’ll be echo added to Hughes’ voice which has been a little low in the mix. 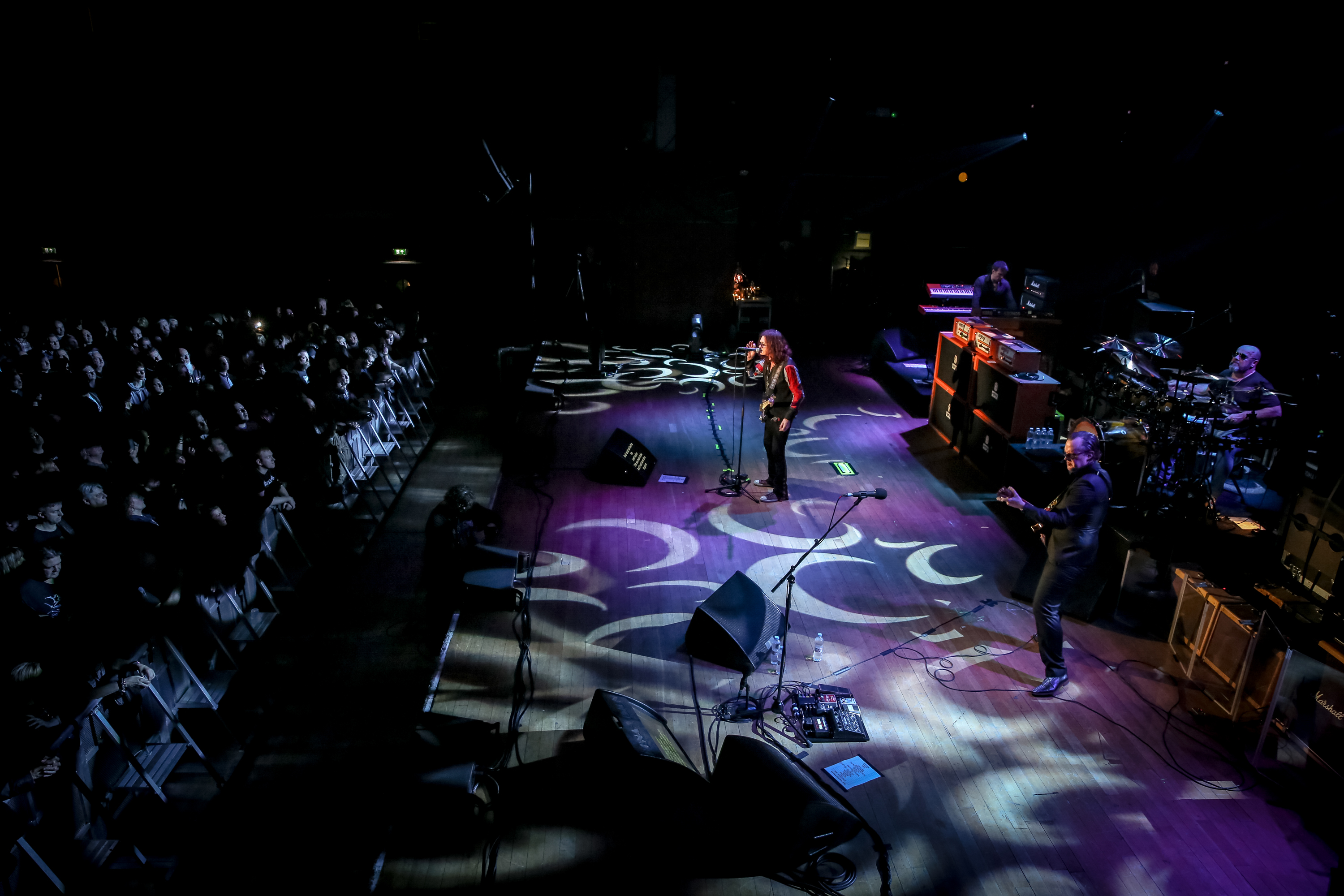 “It’s good to be home!” Hughes declares hand on heart, then arms raised getting us to clap along as Sherinian’s piano introduces ‘Save Me’ that will segue effortlessly into ‘Wanderlust’. It’s not the mixture of hard rock, scale and mood changes that begin to impress here, so much as that you know this isn’t just superior musicianship but a band who’ve now rehearsed and actually got to live with these songs more, and as when Bonamassa takes his second guitar solo allowed to extend the song and improvise a little, all safe knowing Bonham’s beat will bring the song back in gear. This is a rock band at work.

Similarly as Bonamassa plays the arpeggio introduction to ‘Song Of Yesterday’ it proves to be more independent of its Free influences, Sherinan’s keyboards and again Bonham’s drumming affecting the dynamics, while keeping the pace.  Hughes stands centre back, striking his old Purple position, Bonamassa moves from the microphone to the front of the stage as he takes his first solo, elongating it neatly. My ears tell me this because everyone in front of me is holding their mobile phones up to record this moment. Maybe I’ll get to it myself on a dodgy Youtube video another day. As Hughes comes up to the microphone to add harmonies the music also intensifies, he then facing Bonamassa in front of Bonham’s drum riser as the three make out like The Who even while Bonham is singing into a head mic “I’m gonna take you higher!” before the song fades in blues wailing crescendo. 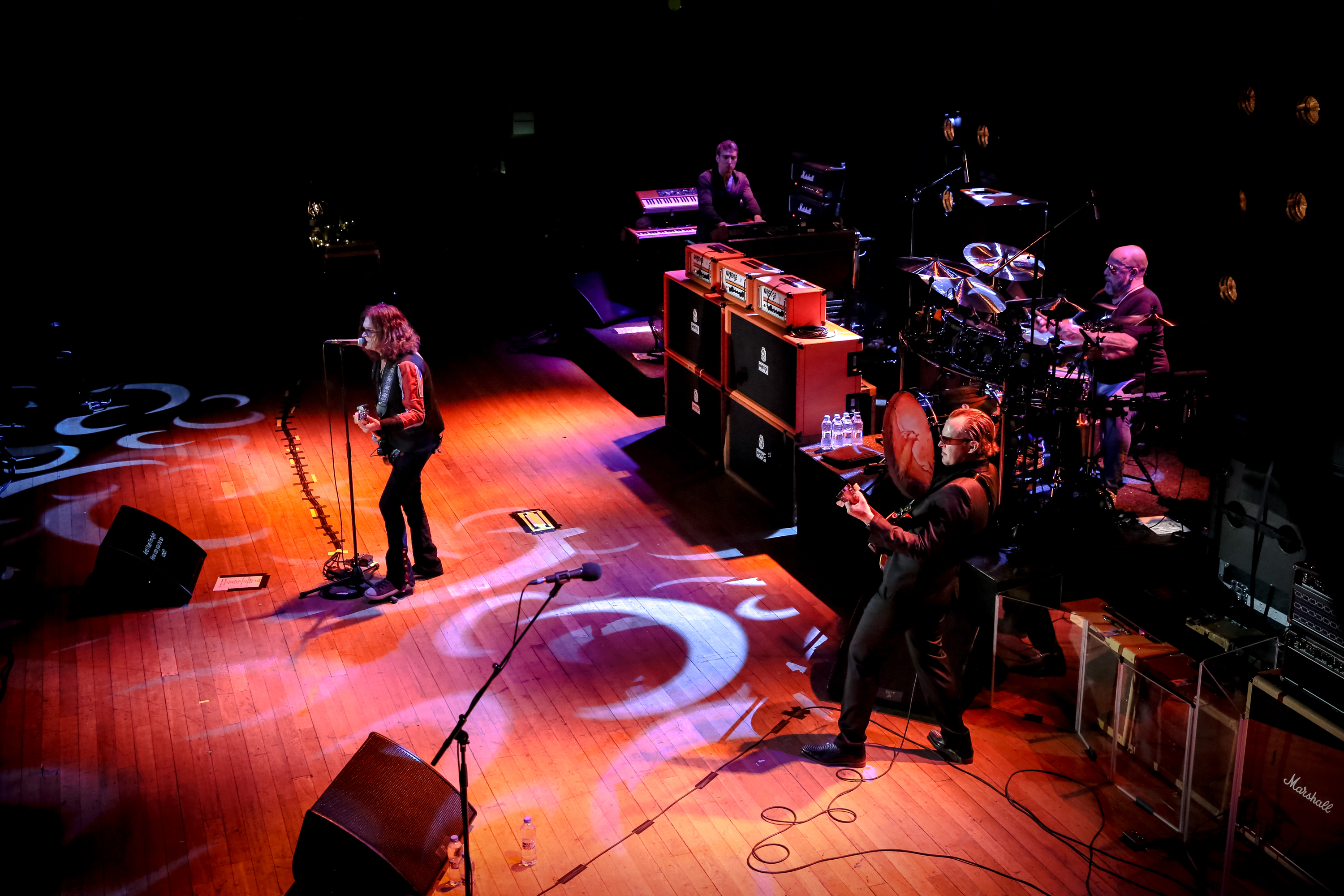 What’s also noticeable throughout the evening is a gruffer sound to Bonamassa’s guitar that benefits the band’s sound. This added to the gnarly bass being played by Hughes during ‘The Outsider’ works a treat, the guitarist and keyboard player later trading licks like Burn-era Blackmore and Lord before going straight into ‘This Is Your Time’ where the band harmonies take precedence over the heavy stop-start rhythm with undercurrents of psychedelia. Sherinian’s keyboards play out ominously as Hughes informs us the next number is about family and friends who’ve passed on and Bonamassa plays the signature melody line to ‘Cold’  with a delightfully unexpected Motown-influenced drum roll leading from the slower ballad section into its heavier Zeppelin blues rock. Alas, the gremlins are out during this number with both Hughes’ voice fading intermittently and Bonamassa’s guitar sound rising up then cutting out. They soldier on regardless and rise to the occasion. 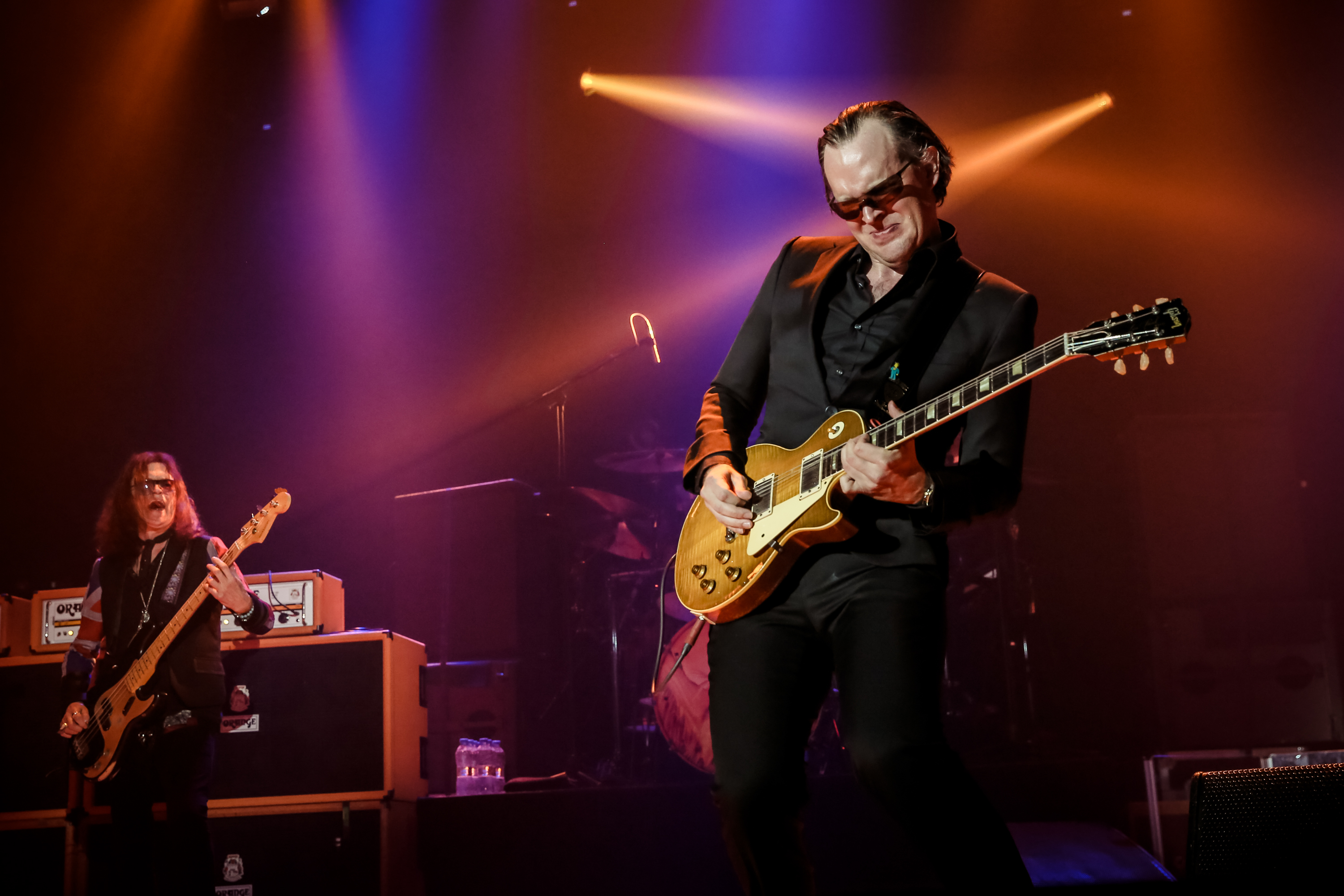 Between songs Hughes banters along exuding a mixture of LA-based new age love and peace and local lad patriotism. Chiefly he tells us how much he wanted the band to play this gig, how much he loves the members of the band and the rabble that we are too. There may be cynics here who raise an eyebrow over such statements but they can’t deny the band has invested time in preparing for and delivering a quality performance here. He’ll also tell Sherinian, who’s been working out, to show the fans his abs and recall how he used to watch Bonham playing in his nappie as a kid when visiting the lad’s dad.

Next up to the mic is Bonamassa to introduce ‘The Battle For Hadrian’s Wall’, another song that comes across better live than on record, and again because Bonham’s drums are able to more keenly drive the changes; that said he also starts clapping getting the audience to take over the percussive end of things, while musos will be interested to note that Hughes plays bass with his right hand’s fingers early on in the song prior to reverting to his customary plectrum style.

They crash into ‘The Crow’ next at a powerful and menacing pace, legs astride front of stage Hughes rocking like a mother as he solos, then as the stage is bathed in a crimson red while spotlights throw out an odd choice of lime green beams at the audience, Sherinan and Bonamassa follow suit soloing. Band harmonies call out “Hey, hey, hey, hey” during the heavy grinding funky rock of ‘Over My Head’ with smooth musical changes in a melange of latter day Beatles and Quodrophenia-era Who sounds, Sherinian and Bonamassa duetting on their instruments, and it’s definitely one of the evening’s highlights. When it’s announced they’ll next be playing ‘The Last Song For My Resting Place’ my own mood shifts.

A dreary overlong song on record for me; tonight proves once more that songs have to be lived in and played to find their true heart. They bring on special guest Gerry O’Connor from The Dubliners to play mandolin and violin on the song, and if anything the overall sound becomes less clustered with each instrument able to breath, notably Bonamassa’s own guitar. Once more we also witness the band extemporising on songs, new ones at that, with Bonham soloing during the song’s rocking section. O’Connor received due applause on the song’s conclusion, giving us a little jig before exiting the stage. 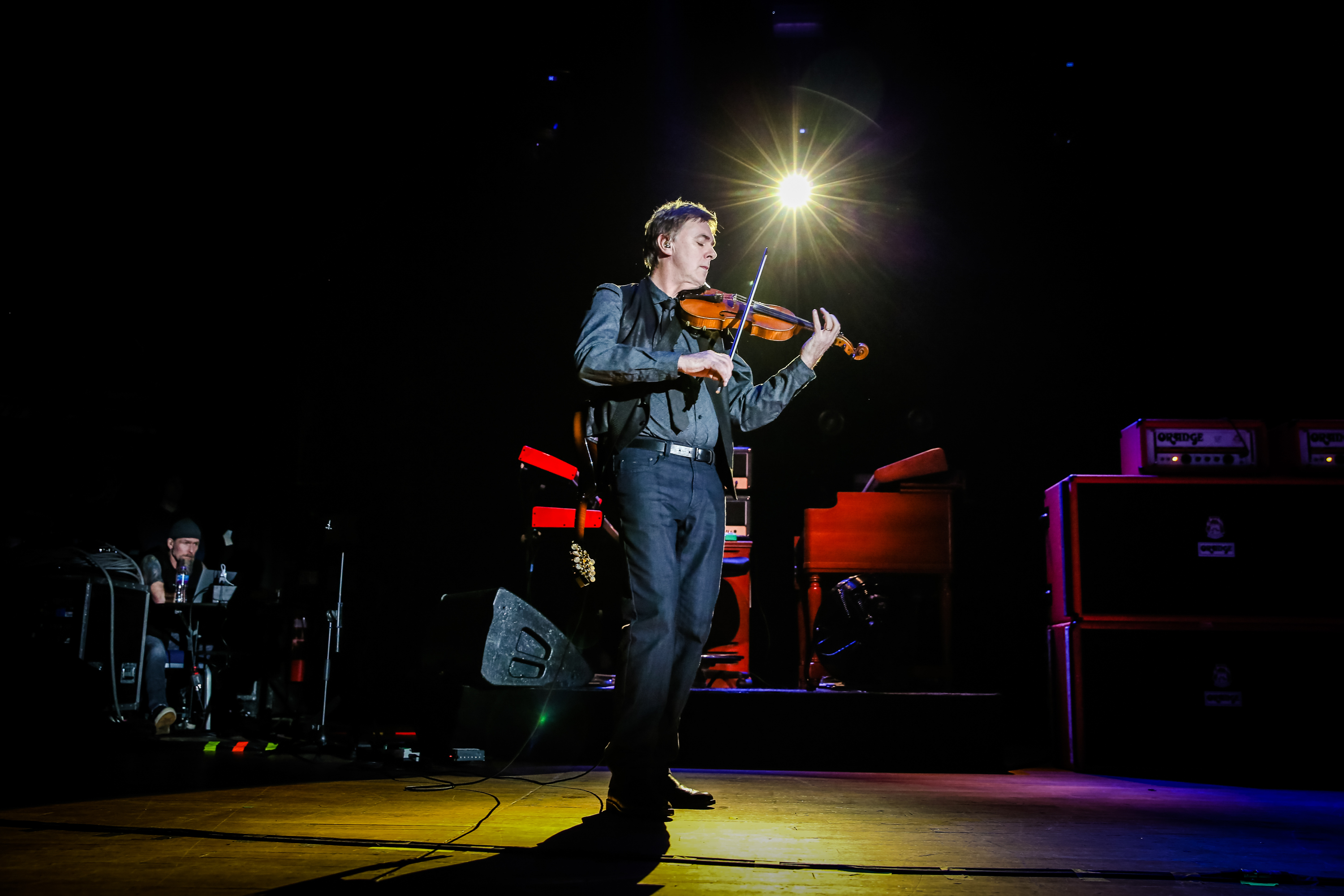 ‘Man In The Middle’ is next, murderously heavy and shorn of the studio gimmickry that made Black Country Communion 2 more derivate of Zeppelin than the band needed to be. Then, as if they needed to stamp their own identity home they deliver the signature number from their debut album, the might warrior clarion call of ‘Black Country’ itself. Hughes’ bass is fuzzed-up to Lemmy style proportions, the tight-as-hell instrumental runs speeded-up.

Hughes hits the high notes vocally and wails like a banshee version of Otis Redding with class rather than some wannabe down at The Apollo in Harlem; scatting with helium-filled lungs that are parried by Bonamassa igniting with sustained blues guitar wailing. The reverb in one’s ear as the band concludes is tremendous. “We love you so much!” calls out Hughes, last to leave the stage.

Returning to encore Sherinian is now sporting a Captain America vest, so we get to see those biceps Hughes mentioned earlier, while Bonham is once more wearing the beanie cap he wore for the band’s opening three numbers. They present us with the heavy rock ‘n’ roll of ‘Collide’ before moving effortlessly into the blues metal meets Arabic orchestrations of ‘Faithless’. 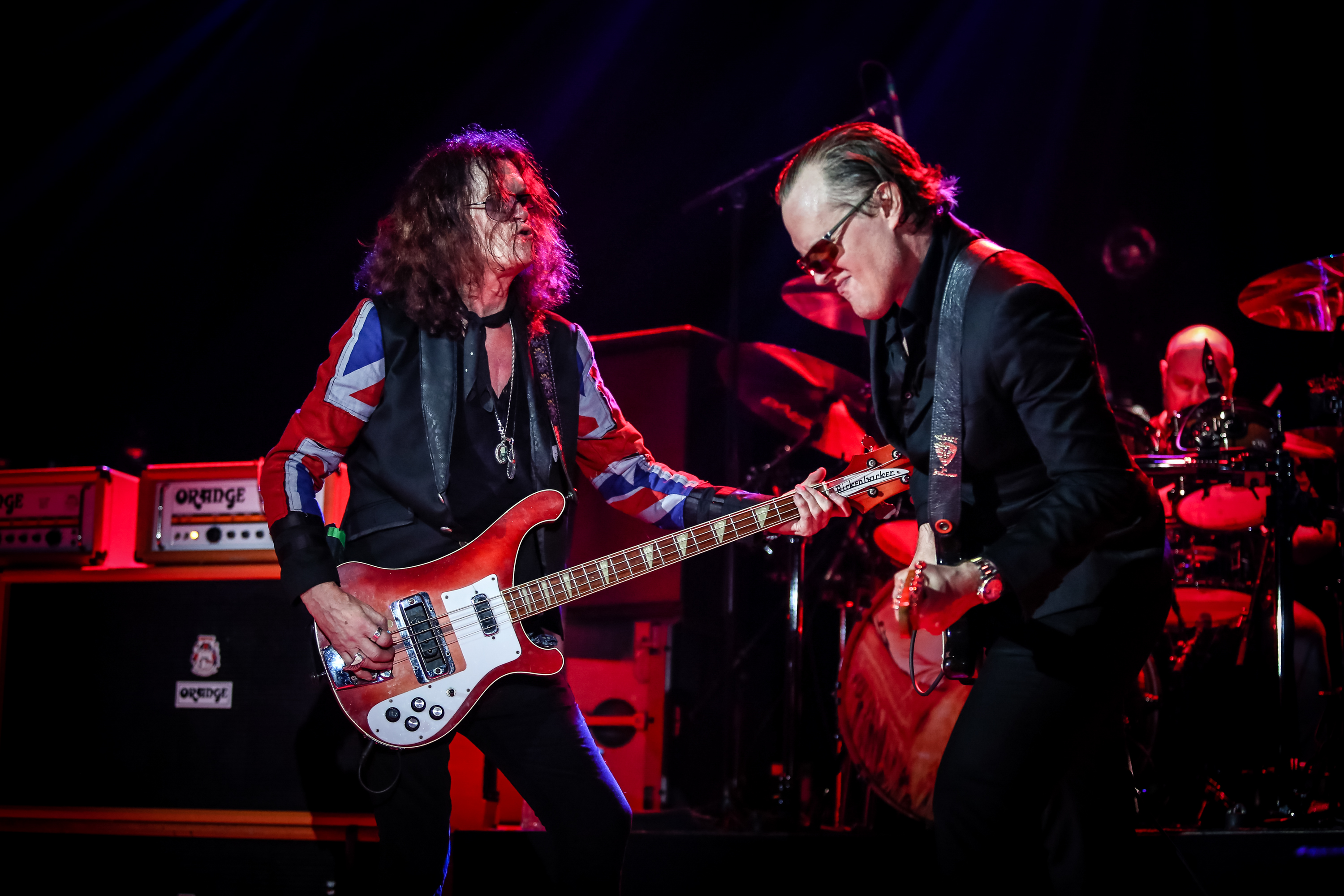 We expect that to be it as a roadie takes Hughes’ bass from him and he begins to recollect how he and Bonamassa first met and the first song they played together. In fact it’s an introduction to the evening’s final number with a rendition of Deep Purple classic ‘Mistreated’, Hughes strapping on a Rickenbacker bass, an instrument he’s not played live since the Stormbringer tour. Bonamassa invests an extended guitar overture with classical touches, harmonics and speedily precise runs but it’s those two notes put together by Blackmore many moons ago that has the audience’s hands raised as one in the air swaying in time.  Hughes’ voice echoes, Bonamassa layers in modern blues and suitable histrionics, Sherinian seasoning for flavour throughout and Bonham driving it home one last time as it builds to its raging finale.

“Thank you for this opportunity to play rock music, rock music will never die!” exclaims the Cannock man holding a microphone as the band come stage front, waving and shaking hands with the audience. “Peace, brothers and sisters” he declares as they exit one final time. And let’s hope that peace and serenity prevails among the members of Black Country Communion too, such a ragingly good band needs to be seen and appreciated live far more often.

(All photos by Christie Goodwin). 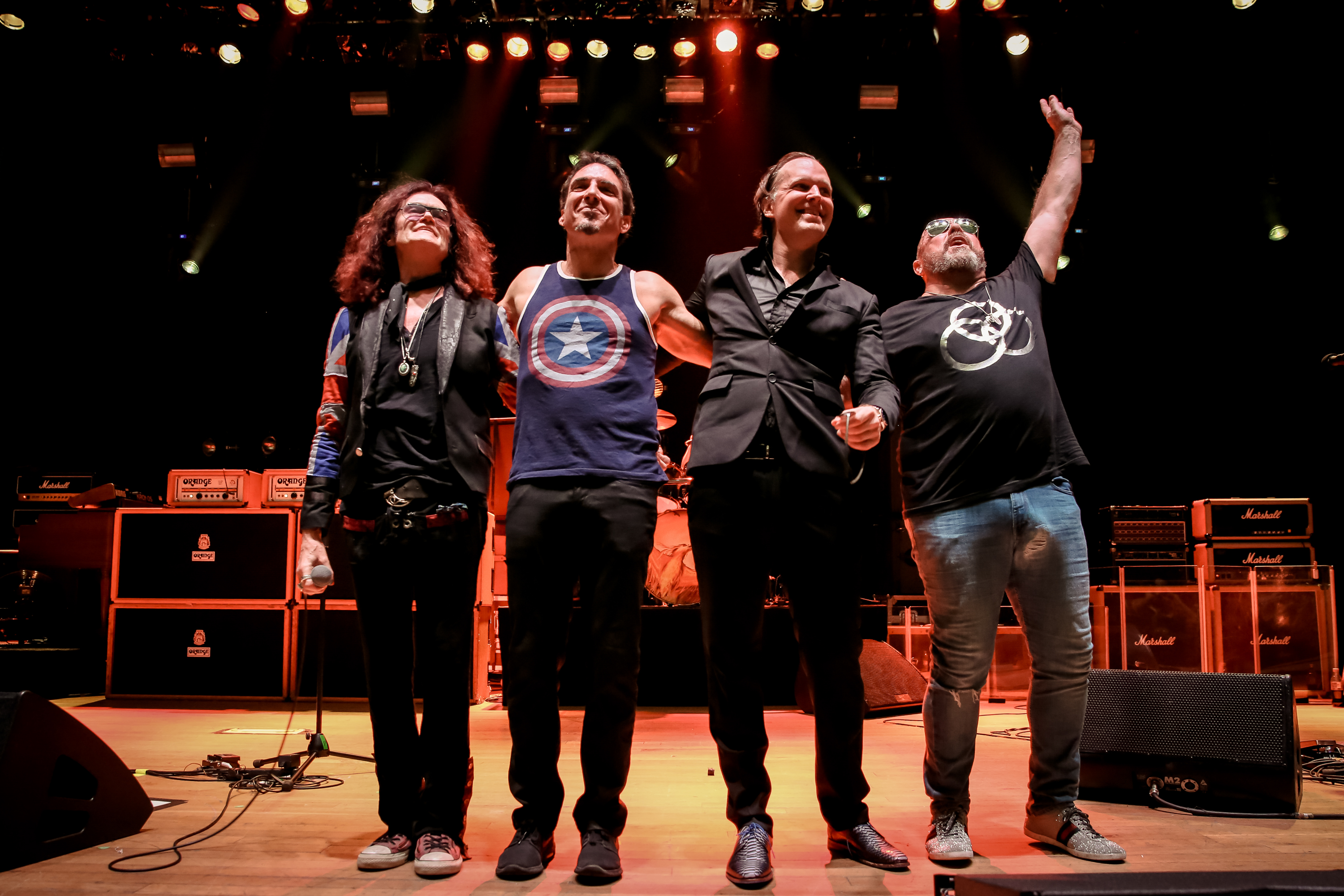