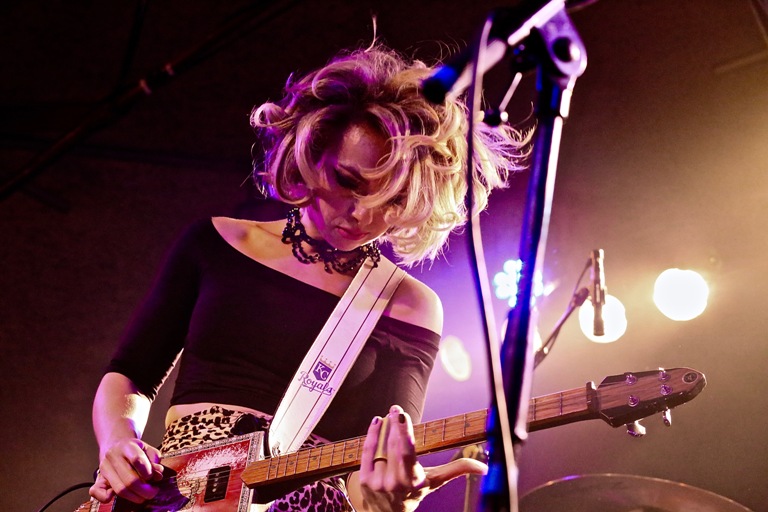 Curse of Lono produce music for driving alone at night down long country roads. Not depressing, more melancholy and thoughtful. Its roots driven, with a dash of the blues though more dark folk with an 80s pop quality also somewhere in its foundation. Picture Echo & The Bunny Men meets The Waterboys with Richard Thompson filling in on guitar. A five piece; drums, bass, two guitars, and keyboards and on occasion four-part harmonies.

Their songs stir and whirl along allowing you to centre on their lyrics, and they feature a very able lead guitarist with a sharp bite to his sound, who never overplays. They’re received well by a full crowd and will be going out on their own headline tour later in the year.

Following last year’s tour, Samantha Fish returns to these shores shorn of her rather fabulous horn section. Regardless, tonight with just rhythm section and keyboards and her own talent she puts in a performance that rocks out and keeps this audience’s attention firmly focussed.

As the spotlights dance about she moves front of stage towards the crowd. Still sporting a 50s moll blond hairdo, she wears a gold lame top and tight leggings, and a variety of guitars throughout the night.

“You broke my heart,” she sings and we’re straight into the hard driving rock and sweaty upbeat sounds of ‘Wild Heart’. She strikes a pose, plays with her hair then turns her guitar on stun mode. Barely resting, we move from sunny boogie to full on screaming vocal hooks. You can say Joplin, I opt for prime-time Bobby Plant. This is ‘Turn It Up’ underpinned by a dance rhythm as she jumps on the spot then works the stage during an effects laden solo.

Slipping on a box-shaped guitar she calls out: “Wanna hear something new?” Then with a large slide affixed to her left hand delivers a great stomping boogie with some ZZ Top dressing on the side. However, it moves into torch song blues and further evolves into full-on Zeppelin rage with some orgasmic slide guitar sounds. ‘Love Letters’ indeed.

Someone recently compared her voice on record to Amy Winehouse. Well, yeah, singers long ago appropriated the jazz trumpet player’s slur technique to suit their vocal stylings but Fish goes way beyond that live and really needs to be experienced in that environment. The tune that tumbles along next could be Winehouse doing a cover of the Stones’ ‘Wild Horses’ but that and ‘No Angels’ later are as near as such comparisons get here tonight.

There’s much repartee, Southern charm and innuendo tossed the audience’s way tonight, and as she tells us they’re going to play “Something off The Belle Of The West” the piano leads into some upbeat blues that again finds a Stones like bed mate during ‘Little Baby’. Skewered chords scorch red hot between highlighted notes, then with hands raised to clapping along as she sings out a verse. There are more hand gestures, some vocal gymnastics and she turns her back on the audience to plays along with drummer (whose face is cast in darkness throughout the night), the music changes with her taking in some country picking, there are time and rhythm changes before turning to play off against the keyboard plater as he solos. Underneath it all, the bass player is giving it some extra oomph.

Fish moves stage centre takes a rockier guitar solo with some added subtly swoops, the drummer solo, they mix it up and once more it roars towards amped-up overdriven Zeppelin bombast in its conclusion. With an ache in her voice, vamping hard, she sings out “Does it hurt you like it used to hurt me?”; keys working the room during an ace piano solo.

‘No Angels’ is described as a new song. Paced with burly urgency, she roars out, getting sassy in the chorus. She changes guitar, vocal harmonies exude a tender mood as dark prowling notes veers into heavy metal mode striking hard. She kneels to the floor messes with her effects pedals creating a wall of sound before they draw to a conclusion. With acoustic strapped on they go into a slow groove with deep Southern soul. A keyboard solo dances warmly, her echoed vocals, sigh and cry. Acoustic ballad ‘Daughters’ takes on a world music feel half way through before she changes to electric for a raging dirty solo. Then, when you think it’s going to end quietly the band roars up like some Avant garde Van De Graf act.

She ends her set with the classic 1-2 punch of ‘Bitch On the Run’ and ‘Watch It Die’. Noisy rock and roll tunes that gets your foot tapping furiously, Fish shaking her head soloing away and wandering about as they end in classic rock bombast with drums and the who damn kitchen sink pounding away to glorious conclusion.

It has been a great night, our attention held throughout, and we’re itching for an encore. Here in heavy metal’s home town of Birmingham we get served a treat, a number she’s covered in the past but as she declares to the band  “This is the last time” and her drummer counts in: “1, 2, 3, 4, 5!” Wonderfully blues enthused with jazz ragged sharp chords, Tony Iommi’s momentous licks fished from the depths to swim in clearer waters this is Black Sabbath’s ‘War Pigs’ never played more beautifully (Yeah, I know Ozzy sounds like a broken horse these days and was never the sweetest of singers).

This is not a cover tune but rather both reappraisal and reaffirmation of the song. Imbued with a sexy witchcraft style of playing and intoned lyrically to emphasise its political outrage it’s quite frankly, what Brummies call bostin! An organ takes the role of Ozzy’s “Aha” chant near the end to accompany the final guitar solo, as shaking her head, her body swaying in time Samantha Fish ends what’s been an awesome evening.