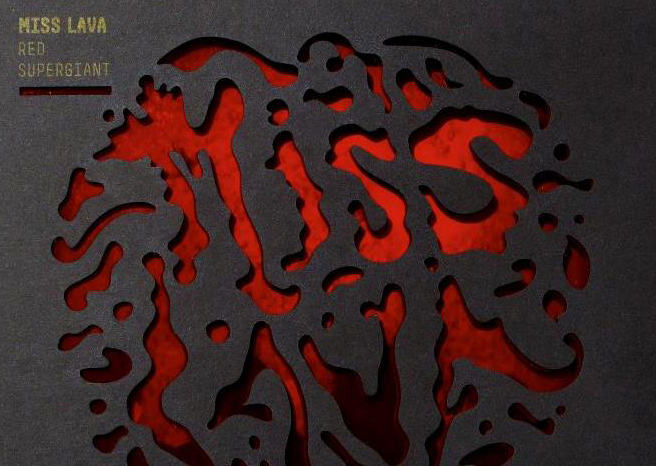 Lisbon’s heavy rock ensemble – Miss Lava – have unleashed their fierce new brute-baby into the world. Their terrorizing new album, ‘Red Supergiant’ has been released by Raging Planet Records. The crypto-domes have splintered, the ash-clouds have been scattered, and the lava has spurted forth. So, all we can do is submit to the violent forces created by these bearded Portuguese stoners.

‘Red Supergiant’ was mixed and mastered by Grammy Award winner Matt Hyde (Slayer, Monster Magnet, Fu Manchu, Children of Bodom, The 69 Eyes etc.) And it was produced by Samuel Rebelo (he also produced the band’s 2009 release: ‘Blues For The Dangerous Miles’.)

Opening track ‘Desert Mind’ sizzles like a steak left too long on the burner. Sneering vocals from Johnny Lee sound as arrogant as a political smart-ass who has just won himself a big pot in a game of three card brag. Then ‘ Lay Down’ comes at you like the edge of a burnished sword. Dangerously sparkling in the sun. An insistent hook delves deep into your private affairs, and it plunders your underclothes. It leaves you feeling a little dirty. The bass ( from Samuel Rebelo) hisses with pleasure. And a big lump of riffage leaves you feeling replete.

‘Feel My Grace’ has a low nibble. A grinding rhythm. And a clawing melody. The guitars screw with your mind … They almost hypnotize and confuse you with their swirling rotations. A breathing space, two-thirds of the way through the song, sets up the chorus nicely. This is a pithy and successful number.

‘Ride’ has a sexual rhythm. It’s a real night-time humper. Sleazy pools of liquid leak out from the guitars provocatively. This one’s as lusty as a sex-starved, three-horned rhinoceros.

Then the song ‘Crawl’ slips out of his hiding place and sneaks up your bare leg. This tune will leave slime in your pits. ‘Hole To China’ is rusty. Huge pieces of corroded iron are clanged tirelessly against massive beams of sound. The downward spiralling riff puts your mind in a spin. But what a way to go.

‘Catch the Fire’ bounces along like a springbok with a fire-lighter caught up it’s Jack and Danny. And then ‘Murder Of Crows’ comes along and sprays your inflammations with 90% pure poteen.

‘Motel Neon’ has lacerating guitars that envelope those knowing lyrics. This song is about red lights in windows, and sweaty nights spent over cracked bottles of Jack. The cold-rolled guitars create some shelter for these hot-dip activities.

Then we get ‘Yesterday’s Gone’ which spits in your eye. This is a salivating beast of a song. His coat drips grease from every pulsating orifice, as he drags his forlorn carcass across from the speakers … and gets up close and personal. This song gets in your face. If you like the idea of being trussed-up in a sweat pit alongside a suffocating pit-bull, while he constantly thrusts himself at you, then this song is for you.

The title track ‘Red Supergiant’ comes at the end of this bumper eleven song collection.This piece is constructed with sensitivity, but seems out of step with all the other tracks on the album. Nevertheless, it has sharp guitars and kindly layers of chords. These shimmer in the distance, as the slightly jazzy vocals are carefully uttered.

Slap this album on, especially when you are having a barbecue, and you will not be disappointed. It has energy, it has zeal – and it even has a little charisma.