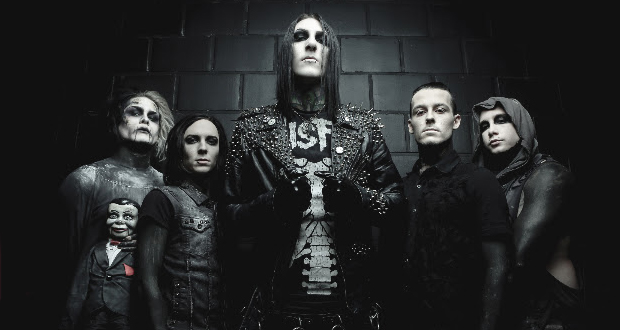 Following the horrific events that transpired in Paris last December, Motionless in White joined the long list of bands that were sadly forced to postpone and cancel gigs due to safety issues. RAMzine were therefore chuffed to hear that the Scranton’s most ghoulish of guys would be rescheduling and bringing the Beyond the Barricade tour back to the UK and Ireland.

We are at Camden’s infamous The Underworld this evening for the first of two London dates, and suffice to say the sold-out venue is already living up to its intimate name. In a word – sweatbox. Coventry’s Silent Screams are up first and do an admirable job of warming up the rapidly growing crowd with their post-hardcore ferocity. Frontman Joel Haywood has some serious pipes on him and is able to move almost seamlessly between low-end growls and clean vocals (‘When It Rains’ and ‘Eighty Six’) whilst his invitation to “punch someone in the dick” during a pummeling rendition of ‘Desperation’ is the cue for an impressive-given-the-size-constraints) pit to open up just a few feet away. Expect to see this furious four-piece hitting a stage near you soon.

Given the amount of female fans in the vicinity sporting the two tone red/black hair (or the “Half-Head Army” as they are affectionately known), it’s safe to say that as many people are here for New Years Day as they are the headlining act. The assembled throng go wild as set opener ‘Kill Or Be Killed’ drops – bellowing the lyrics right back before joining the band in a passionate headbang en masse. Ash Costello is a sight to behold and has this adoring audience eating out of her dainty palm from the get go, but her killer stage presence is thwarted by sound issues. Thankfully, the mic boglins are short-lived and her good natured cry of “What the fuck!” segues into a hair-raising salvo of ‘I’m No Good’, ‘Epidemic’ (“this one goes out to you guys!”) and never played on tour ‘Malevolence’ which sounds absolutely monstrous in a live capacity. The biggest cheers however, are reserved for ‘Angel Eyes’ with the subsequent appearance of Chris ‘Motionless’ Cerulli whipping this crowd into a near frenzy. It is obviously far too much for a young fan stood nearby who is unashamedly sobbing “I love you guys!” whilst chucking her drink all over us. Excellent stuff.

As the clock creeps around to 8.02pm, the hormones are practically ricocheting off the moist walls as the strains of ‘Death March’ begin to reverberate around the heaving room. Motionless in White finally come into view and do not disappoint. You could be forgiven for believing Hallowe’en has come early – bassist Devin ‘Ghost’ Sola has donned a wonderfully sinister Michael Myers costume, the corpse paint is in full effect and Chris Motionless is utterly resplendent decked out in a full trench and face beaten for the gods of goth. The theatrics and mannerisms are pure Manson during his Antichrist Superstar heyday, but act as a head turner rather than a turn off in their familiarity. The bodies proceed to fly during ‘Devils Night’ and clenched fists are pumped skywards with the inclusion of hits ‘Abigail’ and ‘Undead Ahead’ which delight the old school fan contingent. There’s plenty of on-stage writhing during ‘Hatefuck’, the raw chemistry between Motionless and Costello on the smouldering ‘Contemptress’ verges on the animalistic whilst the sheer cacophony that ‘A-M-E-R-I-C-A’ creates has Chris declaring how he’d love to “f**k everyone right now”. Excuse us for a moment!

Wanton antics aside, there are some incredibly earnest interludes mid-set during which the band reminisce on previous shows and Cerulli shares his heartfelt thanks for making this time round “one of the greatest shows of our career”. It is possible that these very words have been uttered at all of the preceding ‘Beyond…’ tour dates, but it remains a heartfelt sentiment nonetheless. The tempo is restored with a cover of Linkin Park’s ‘One Step Closer’, but at the risk of sounding like a naysayer it fails to hit the proverbial spot. The main issue being that it never really deviates from the original – it’s almost note for note identical. And having recently heard MIW’s goth-tinged take on Rammstein’s teutonic banger ‘Du Hast’, it would have been more appealing to hear these guys put their individual stamp on it.

With an early curfew looming around the corner, there is just enough time for that much wanted “one more song” and the band tear Camden a new one with an absolutely storming rendition of ‘Reincarnate’. The roof practically lifts as every lyric is screamed back in ecstatic unison and as this much adored quintet exit stage right, the applause rings out long after the house lights come up. Take a bow Motionless in White – a masterclass in live performance.