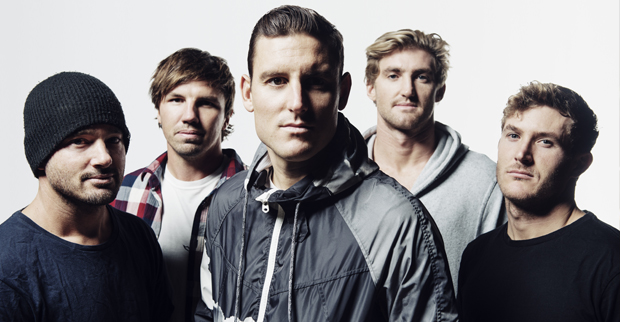 Stick To Your Guns were first on and came out of the traps with all guns blazing! For an opening act they gave it their all, as if they where headlining which is exactly what you want from an opening act. Lead singer Jesse liked to hype the crowd and even mentioned that this was a much bigger audience than they are used to even on a headline run so they were made up to see a sellout crowd bouncing along to their tunes so early in the evening.

Following them were the eagerly anticipated Asking Alexandria who were playing their first shows with their lead singer Danny Worsnop who was back in the band after years. Danny seemed to be more comfortable on stage now, and overall the set seemed to be tailored more to his vocal ability. With songs like ‘Closure’, ‘Not The American Average’ and ‘Run Free’ instead of the heavy metalcore they geared it more towards a hard rock style, suiting Dannys vocal needs a lot more. It actually sounded better! It felt like a band with a new lease of life, however it seemed like the crowd connection was just not there very much considering they have a legion of loyal fans.

Parkway Drive has been one of the hottest acts on the planet at the moment and cant do no wrong it seems, their rise as a arena filling act is seconded by their live performance. As soon as they step on stage to the intro to wild eyes, showering the audience in confetti and atomic level strobe lighting, it’s clear that they are a band on a mission pounding hit after hit covering their entire repertoire of albums. Standout tracks for me were ‘Carrion’, ‘Crushed’ and ‘Sleepwalker’. Their cover of Rage Against The Machines ‘Bulls On Parade’ gave a live metalcore version of the bands classic funk-metal tune which saw more bodies flying across the top of the pit more than any other tune before hand in the set.

Having seen the itinerary of shows they have done this year, Winston’s voice was on point. Between songs he was open and friendly towards the audience and at times picking out members in the crowd to chat with. The finale of this highly polished performance was ‘Bottom Feeder’ which although there was no extra pyro or staging theatrics as per the other dates on this tour was the ultimate way to close off a show.