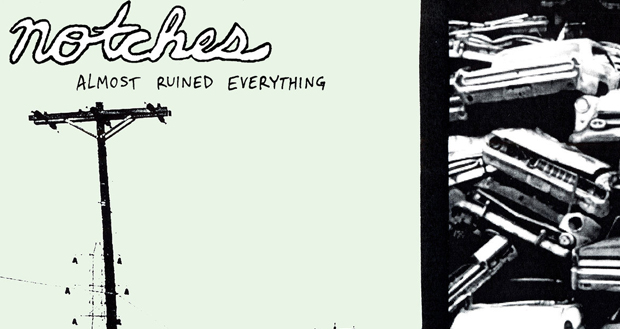 For all those who long for the era of classic emo bands, who wish they could go back in time to see Husker Dü or Midway Still destroy someone’s basement, you need mourn no more, thanks to New Hampshire melodic punk rockers Notches. The first thing that grabs your attention upon pressing play on their sophomore album is the melodic double-tracked vocals and seemingly indie inspired jangling guitar work; which manages to stay incredibly catchy despite the raw and heavily distorted guitar tone, causing a glorious wall of noise to come crashing through your speakers. This leads into some very impressive drumming that kicks off ‘Cymbals’, a brilliant example of an intense and passionate pop-punk earworm, played with a sense of urgency for almost the whole track, making an exception for the buildup to the powerful final chorus.

By the time you get to the track ‘At a Medium Pace’, you might fear that an acoustic song this early in the album might, as the title of the song would suggest, slow down the album’s blistering pace. However, the song does no such thing, as it’s kept short and sweet, and serves as a perfect intro to the absolutely anthemic ‘Perfectly’, with a vocal style and lyrics reminiscent of the best  psychedelic rock bands. A simple yet effective upbeat guitar riff, and a chorus so infectious that it will have you singing along at the top of your lungs after hearing it just once. All of this adds up to the most joyous moment on the record.

‘Telephone Wire’ also stands out on the album, opening with a dark and dissonant riff, which is juxtaposed with the joyful vocals and lyrics. The album closes with the short and wonderful ‘Shades of You’, leaving the album with another great example of a perfectly crafted pop-punk tune, ending the record with some beautifully harmonised vocals.

By combining elements of classic post-hardcore and emo bands of the late 80’s and 90’s with more contemporary styles of pop-punk, Notches have created an insanely joyful and fun record that is guaranteed leave a grin across your face. For fans of punk rock, Almost Ruined Everything is an album not to be missed.