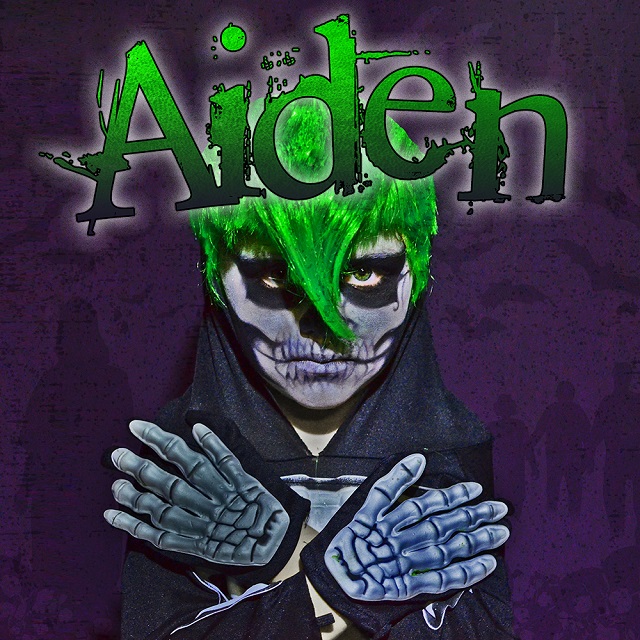 Aiden seemed to be the right kind of band to soundtrack the mid-00s with a punk rock revival, the ’emo’/ ‘scene’ culture and MySpace making sure unknown bands got heard. However the likes of My Chemical Romance, Panic! At The Disco and even Green Day seemed to rule the rock charts. Aiden were always the band you had more cred for listening to. Not to say their original run wasn’t a success, they released six well-received albums and their tracks were used in everything from wrestling events to a Lost Boys sequel. A lot of modern bands, like Ashestoangels and New Year’s Day, cite the Seattle band as paving the way for modern ‘goth-punk’ bands to be heard. Now after a short hiatus, and a couple of solo albums – William Francis has brought Aiden back with a self-released and self-titled new album.

The record starts with what can only be described as a voice mail to Francis himself. Followed by probably the best way of saying ‘We’re back’ in the form of ‘Crawling Up From Hell’. This possibly reflects the struggle of bringing back a sound as recognisable as Aiden’s succeeding William Contr- I mean Francis’ leftfield solo work. The next track, ‘Violence and Devotion’, confirms they’ve never lost it. This song is a love letter to Aiden fan favourites ‘The Last Sunrise’ and ‘Die Romantic’. Only difference here is: it features New Year’s Day front-woman Ash Costello, who brings a 2015 twist to the track. Costello’s contribution even gives this song a ‘Beauty and The Beast’ vibe for the modern day gothic.

Speaking of collaborations – Bristol’s own Crilly (Ashestoangels) makes an appearance on ‘New Grave’ as a nod to the sub-genre the two vocalists helped shape. This is leaning more towards later Aiden and earlier ‘William Control’ tracks as it takes a darker, AFI -esque approach,  Aiden (like Ashestoangels and NYD) are a band who really understand their fan-base and know how to give them what they want. ‘Standng Alone’ and ‘Eternal Halloween’ are testament to this. Familiar vocal style, punk guitars, and a Tim Burton-y atmosphere is what Francis and co do best.

In a change of direction, Chris Motionless joins the party for ‘Animals’. Motionless In White are slightly harder hitting than other collaborators to this album but this track still fits perfectly on the record. In fact, this track would even work on a MIW album. At this  stage, the Seattle rockers could of ended the album here and it would still be awesome. It says ‘we’re back’ and sounds great doing so. As you may have guess there’s more to come. This is a 13-track epic.

The guest appearances don’t end there either. Esape The Fate’s Craig Mabitt lends his voice to the heart-pumping ‘Pure Horror’. Leafar Seyer of Prayers screams his way through closing track ‘Bring The Knives’ – which also becomes a little more hardcore a la Black Flag or Misfits (which the album’s artwork is a nod to).  Somone else tasting success and sharing vocal duties is Fearless Vampire Killers’ Kier Kemp. Which makes him fully qualified to do this, with William Francis  on ‘Love Like A Cemetery’ which really works as a duet. Like the other collabs, there is elements of both FVK and Aiden in there.

If you love Aiden’s previous work, or even any contributors – download this album. You have no excuse not to. For a start it’s free. Who paid for it? Will Francis. He auctioned his old Aiden memorabilia to fund the record. So technically the passionate fans funded this project. You can hear the love that went in to it. So the least you can do is give it a listen. You won’t be disappointed.