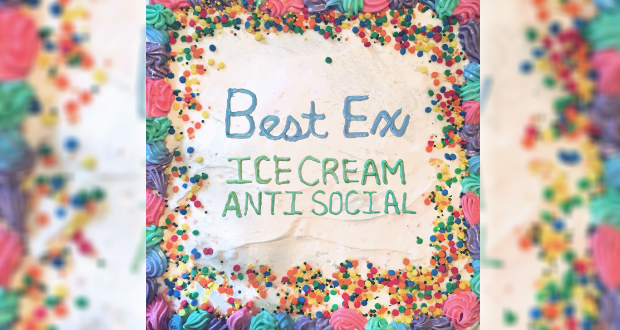 Formerly known as Candy Hearts, Best Ex is the new project from Mariel Loveland. Except it’s not really a new project but more of a spiritual re-branding as they’ll continue to play Candy Hearts material. Whatever you call it, they’ve dropped their first EP, Ice Cream Anti Social, which sees them move away from bubblegum pop punk and into straight up pop territory.

A fact that becomes apparent when ‘Girlfriend’ kicks in, sounding like it could have been penned for the latest Disney teen idol to be shoved down our throats. If you are looking for rock or metal, this is as far away from it as you can get with its electronic sound. Lyrics like ‘baby I’m bad news, but I am good for you’ are aimed squarely at the teen market.

‘Lonely Life’ is more of the same with a tinge of the melancholic as Loveland declares ‘my cat is my best friend, but she don’t give a damn about me.’ The sad truth is, this stuff is boring. ‘Someday’ has a catchy enough chorus but these overproduced indie pop hits are not going to grab you. Any heart that is there seems to be buried away underneath the squeaky clean sound.

When Best Ex are at their best, they ditch all that pop gimmickry. ‘February 4th’ strips everything back and instead focuses on Loveland’s voice. While she’s unlikely to win any technical singing competitions (although she definitely won’t be last), she has character, and you believe what she is saying. The flaws in her performance work to her advantage. Elsewhere, ‘See You Again’ harks back to Candy Hearts more punk roots and is all the better for it.

Ice Cream Anti Social is probably a decent indie pop EP. The problem is that indie pop isn’t really what we do at RAMzine. Candy Hearts were on the very edge of our world already, and with their re-branding, they have leapt straight out of it. If you fancy a little bit of light pop to work as a palette cleanser, then you could do worse than Best Ex but it you’re a rock, metal or even punk fan, then this wasn’t made for you.