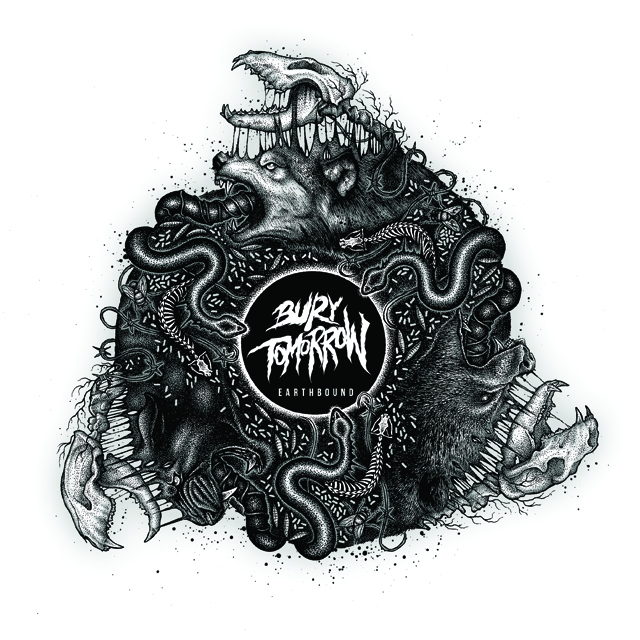 Southampton giants, Bury Tomorrow are on track for one of the most anticipated metal albums of 2016 titled Earthbound due for release on the 29th January. After the roaring success of 2014 album Runes, the ever-growing metal band are hoping for an explosive new year in music. With a short UK run up and coming with Parkway Drive and Thy Art Is Murder to coincide with the album release, the reaction and reply to Earthbound is a key aspect on the year that is about to follow for the band.

Opening track ‘The Eternal’ sets the tone for the 10 track document, which is sure to settle any previous worry about how different this album may be to previous records. Follow up track ‘Last Light’, follows a similar principle with the layering of guitars and boisterous opening, but with a lighter, rockier substance to it.
Lead single and album name, ‘Earthbound’ gives the older and newer fans of BT a sense of a new direction. The band have essentially raised their game, and are showing that they are a prominent face in the metalcore genre at this point. As lead single, it shows maturity and growth in the songwriting and production, including a catchy opening which reels you in and a clean guitar and vocal bridge crossing with a heavier opening. ‘Earthbound’ continues to grow and improve as each track passes.

‘The Burden’ is an anthem track on this album, it shows to be a lead contender on what could be the next single from Earthbound. It gives off a vibe that not only should this song be played through either headphones or a speaker, but the intense words of “Fear No Evil” should be fiercely screamed at the top of your lungs in the sweaty pits of a Bury Tomorrow show.
As we reach the middle point of the album which is found in the track ‘Cemetery’ it adds a slower yet still heavy and dark aura, shortly followed by ‘Restless & Cold’. It comes down hard on the musical frontage and gives the band possibly their best lyrical songs to date. ‘301’ has a pull of anger and hatred throughout and features the most powerful bridges on the record, as it gives an aggressive message in the most creative way. ‘Memories’ again, could have been another one of the albums leading single as it shows you what Bury Tomorrow are all about. If you are that person who searches for that moment of clarity on an album, it is found within this track.
This story so to speak, ends on a high note with two of the slightly heavier tracks which on the album. An absolute powerhouse in the ending track ‘Bloodline’ – it gives you the sense that this is only the beginning for the quartet. Each track is delicately produced and perfected to show that this is the best album that Bury Tomorrow have done to date.

Earthbound is a substantial step forward which gives fans what they want, whilst also doing themselves justice by mixing it up, keeping their sound consistent and precise. This, alongside 2014 album Runes is just the beginning of what is to come for the band, who are on course to becoming one of the best British Metalcore bands out on the circuit.