Review: Comaniac – Return to the Wasteland 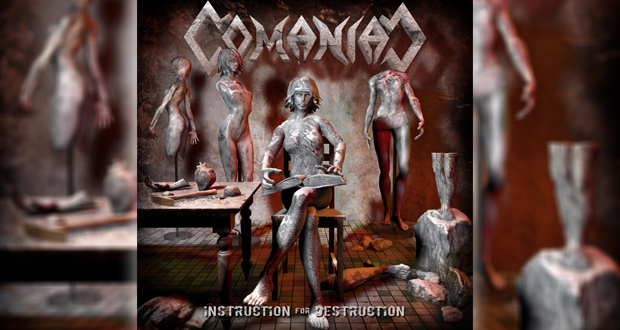 It isn’t typical thrash, at least not vocal-wise and there are some strange whisperings and unusual sounds embedded into the track ‘Coal’ with fantastic biting riffs and rhythms that make it a pleasant listening experience.

‘Suborned’ is very typical of its genre in places as it races away taking pleasure in skimming past the ears at a rate of knots.

‘Bow Low’ is a fast paced dark and ambient track despite being thrashy and loaded with various textures that make the track what it is – harmonic and head-bang worthy!

‘Guarding Ruins’ takes a step back from its thrash roots and offers a small respite from the feistiness but only for a brief period when its chrysalis turns into an iron butterfly and it rampages about in the same familiar footsteps as the previous tracks.

‘How to End It All’ is another track that hides in the shadows at the beginning but again not for long as you can feel it brewing up its own storm. Vocally, Jonas has a powerful voice but he doesn’t sing in a thrash vein as the music is more melodic/hard rock than totally out and out thrash. Like on this track!

‘Self-control’ however it’s a nice raw track that doesn’t let the side down as it sizzles and inflames the boisterous journey.

‘Heart of Stone’ is another melodic stride of metal that doesn’t go entirely out on a limb but the rhythms are seductive and memorable with a hearty chug of sorts that make it appealing.

‘Forever More’ is a powerfully raw track that is edgy and responsible for releasing an incendiary device that in turn blasts with compellability.

‘Instruction for Destruction’ holds a seductive run on the frets before kicking off big time with a brutal drum beat and releasing a tirade of chaos.

Although the album states thrash and there is thrash incorporated in its strenuous core it isn’t all out thrash as was established early on in the review, but there is no escaping the tempting rhythms that possess a superb melodic tendency. It is different and probably an acquired taste for Thrashers everywhere. I certainly would give this band the chance of a listen, definitely!

Comaniac Return to the Wasteland is out 7th April 2017 via SAOL Records.