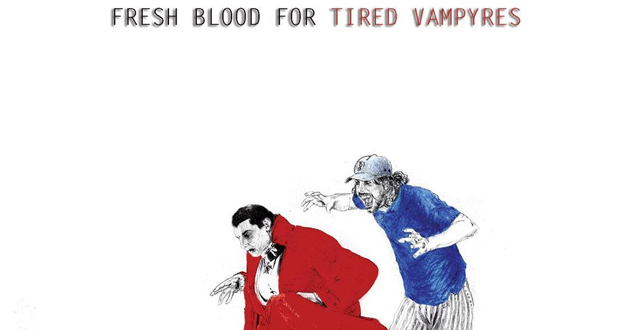 That’s right ladies and gents, the only band to convincingly replicate the sound of a LSD-fuelled-disco-rock-orgy are back. Electric Six return with their twelfth studio album, Fresh Blood For Tired Vampyres.

The ever blunt-yet-witty Dick Valentine shows us they are the same lovably, crazy bunch that we came to adore all the way back with that first, infamous bit of Fire.

Where there are good songs on this album they utterly shine as unique and visceral electronic rock anthems paired with raw, occasionally raunchy, comedic lyrics. The Number of the Beast, I’ll Be In Touch and (Be My) Skin Caboose are all prime examples of such tracks boasting solid hooks and contagious chorus’.

FBFTV does slow it down on occasion with the inclusion of such songs as Mood Is Improving and the fabulous Space Walkin’ which is a true highlight of the record; acting as a solid bookend for the album and we suspect this one could become a new favourite for any live sets with its sing-a-long potential.

It must be said however, there are some gaps in this album. Where you have a bunch of songs that stand head and shoulders above the rest, it can make other tracks seem plain. I Got The Box and Greener Pastures are victims to this issue and fail to live up to previous entries which will echo in your ears over these songs.

Overall: Is it perfect? Honestly, It has its moments. Could it be better if it was shorter? Perhaps. Is this really a problem? Of course not! This is Electric Six charging on wards as they always have done in their own weird, wonderful, wacky way. Godspeed on the disco-devil’s thunder you sex addled rock gods.