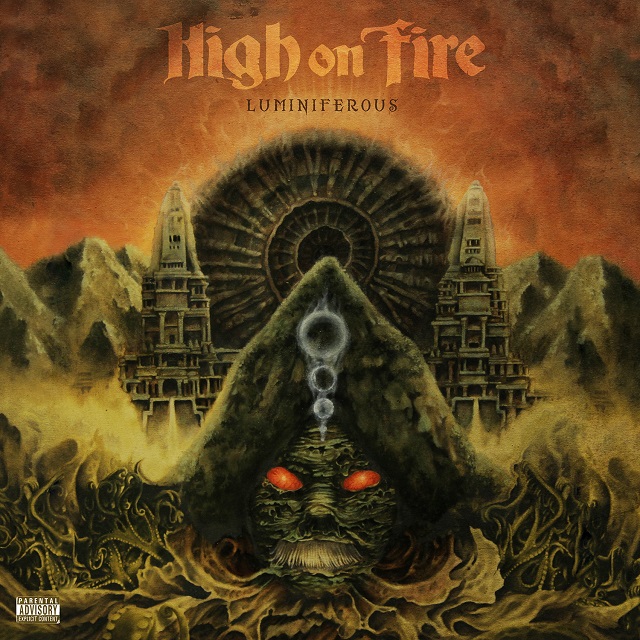 When you are a member of a legendary band like Sleep, expectations will always be high no matter what you are associated with. Matt Pike (guitarist for Sleep) formed High on Fire in 1998 and has turned it into one of stoner metal’s premier bands. When Blessed Black Wings came out in 2005 the band was now starting to be recognised for their own musical contributions. However it wasn’t until the release of the colossal Death Is This Communion in 2007 that High on Fire were rightly recognised on their own.

Fast forward to now and we have crawling from the musical bowels of sludge Luminiferous. Again High on Fire have created an album of towering filth, one which any fan of the band will lap up gleefully. If you’re new to High on Fire then be in for a ride of sludge/doom/groove and blues and mostly a damn sore neck by the end of it. No matter the pace or tone of the song, one thing that will never leave Pike & Co is the ability to create songs that demand for interaction (if you get what I mean).

The production is as always massive, like huge dense tectonic plates of filth crashing through the speakers. With a levelling shockwave of fuzz, suitable for whatever direction the band chooses to take us in next. Sludge & Doom can often be accused of being one dimensional genres, but this is something that High on Fire has never had an issue with. Songs like ‘Slave the Hive’ provide the pace, being like sludge on speed tearing along the doom laden wasteland, creating a frantic kinetic onslaught. Or ‘The Cave’, with its Mastodon styled acoustic moments blending effortlessly with the Sabbath inspired crunch, giving a very much psychedelic feel (this song being the album’s highlight for me). But no matter the vibe created you always get the feeling that you there with the band in the moment, receiving your very own private gig.

Be it intentional or not the drumming from Des Kensal is the real driving force of the album. You get the blast beats hurrying songs along in a frenzied state or a more straightforward beat to compliment the groove. The drums are the centrepiece creating the perfect backdrop to the riffs, while throwing in plenty of fills here and there for good measure. Because of this Jeff Matz bass work oozes over Pike’s riff creating a misty swamp of sound, which is amazingly thick considering that there are only 3 members in the band. So when Pike decides to haze us with another solo the sound looses none of the density created by the foundations. While Luminiferous is expected heavy through out and even boarder line thrash at times, High on Fire never loose the blues vibe that is part of their DNA.