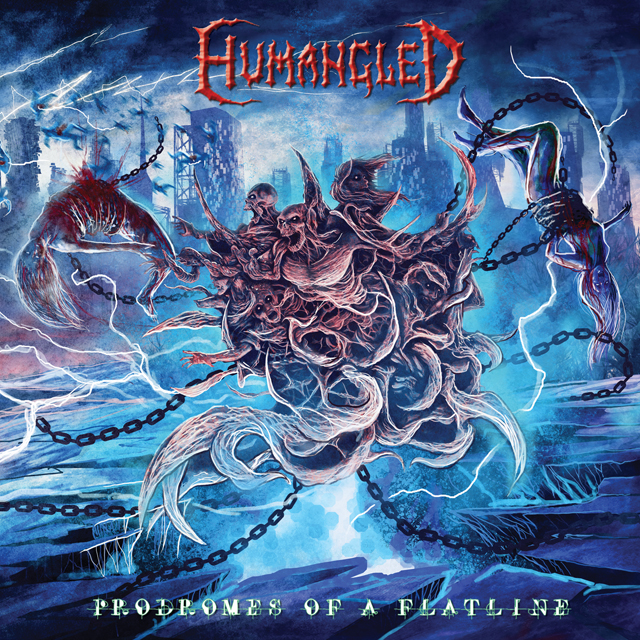 Italian Death Metal outfit, Humangled, first came about in 1994 and released their Anatomic Butchery demotape in 1996 but disbanded for personal reasons. It wasn’t until 2006 that they reformed and went on to release their first EP, Refoetalize, in April 2007 closely followed by 2nd EP Edge of Beyond in June 2008. Following this release, they started work on their first full album before being signed to Abyss Records (Indianapolis, USA) in 2010. They released their debut album, Fractal in May 2010 and two years later, in May 2012, they released a four track EP titled Odd Ethics.

Now, in 2015, they bring us their second studio album Prodromes of a Flatline.

The opening track, ‘Liberté, Égalité, Brutalité’, opens with a curious string section before metaphorically punching the fuck out of your eardrums to firmly establish that, yes, this is definitely death metal and not Mozart. The first thing that is apparent is the quality of the production; there is good clarity in the sound and each element has its own space meaning nothing struggles to cut through. Musically, the album continues in a similar vein – let’s be honest, it’s death metal, so there is only so much that can be done; lyrically, well, the only thing that suggests he is not singing in Italian is the apparent absence of sentences ending in vowels, aside from that he could be saying anything – so in that sense, he nails it. I would not say I am a death metal aficionado; not because I dislike the genre, but rather, once I found Decapitated, I did not need anything else; however, with that said, this is a very solid and listenable album. Humangled do not to bring anything new to the genre but they do death metal very well.

Overall there is a good mix to the album; the bass comes through nicely without booming, the guitar has a healthy crunch yet is smooth and is not overbearing in the lead parts. I would say the drums are ever so slightly understated in the mix, making it sound as thought, at times, the guitars are really driving the rhythm. Looking back to Fractal, it is clear that the band have matured their sound and have brought us a very enjoyable record, far less muddy in its sound.