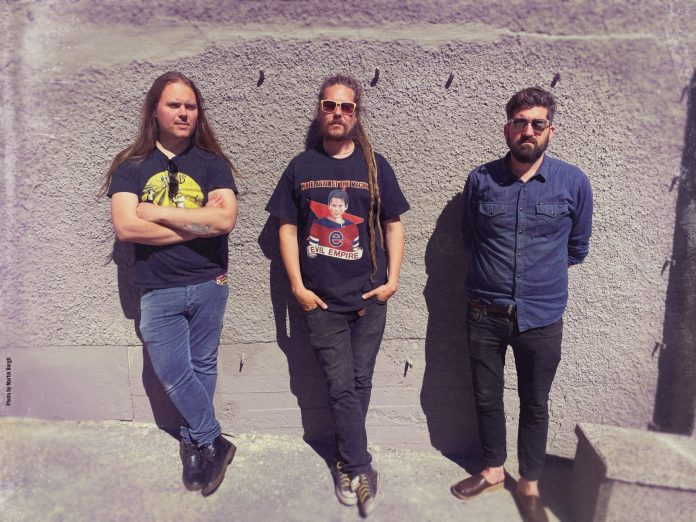 After a stint performing with English prog band Big Big Train, Rikard Sjoblem’s Gungfly follow up their 2018 release Friendship with an album that focusses more on rock than on previous releases. Albums like On Her Way To The Sun were layered with mellotrons and synths but, on Alone Together, the emphasis is on the power trio format – with six delightful tunes of varying levels of rock and prog complexity, and there’re many lengthy instrumental passages, but always played from the standpoint of melody without recourse to being too cleverly complex. The influences including Gentle Giant, Camel, Tull, etc. can be heard but are not overtly plagiarised.

Alone Together is an album about relationships between man and woman, parent and child. On the last track, Sjoblem’s own inter-relationship with the music industry. ‘Traveller’ a song about someone yet to realise he’s free to go if he chooses, is a thirteen-minute epic opener and a song of contrasting moods with stellar guitar work and all the time and key changes you could want this side of 1970’s Yes – it comes across like three songs in one.

‘Happy Somewhere In Between’ (opening line “Needy bastard, I’m so sick of you!”) about a couple trying to co-exist, is seventies Jethro Tull influenced. Already by this stage the sheer quality of the musicianship and songwriting is apparent. What sounds like relatively simple songs in fact contain hidden depths, and it’s a tribute to the skill of the musicians as to how well they pull it off. ‘Clean As A Whistle’ is a quiet Tull influenced song to start but soon moves into a full-on prog-out midway through, with some delightful guitar-keyboard interchanges. Similarly with the title track ‘Alone Together’ which starts quietly but rocks later on as the issue of how to be alone together is considered. ‘From Afar’ is a very short piece, less than three minutes long, and is mainly acoustic and piano-based.

The closing tune ‘On The Shoulders of Giants’ is a fourteen-minute beast of a track containing some fizzing guitar playing, with Sjoblem paying homage to those people who’d influenced him. Similar to the opening track, it comes over like three songs rolled into one with some unexpected changes of direction – one-minute Gungfly are a power rock trio, next minute they’re a soft rock band, but the musicianship here is exceptional and it’s a standout track on what is overall a really good album. All the way through Alone Together, the music is quirky, eclectic, and adventurous. It’s interestingly melodic but it also rocks and the playing is superb. Any prog fan, or just fans of good, well-crafted music, will find plenty to enjoy on this album.