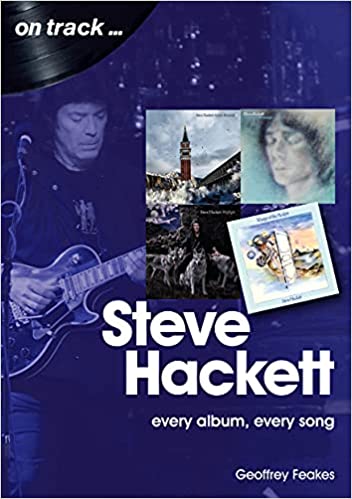 For Steve Hackett’s prodigious output of solo releases since 1975’s Voyage Of The Acolyte, twenty-seven and counting, excluding ‘live’ albums and collaborations – we should thank Mike Rutherford and Tony Banks of Hackett’s seventies band, Genesis. The two men told him in no uncertain terms the band didn’t want him to record any more solo albums, and “if you don’t like this, you know what you can do”. So, already feeling frustrated by what he perceived to be his musical contribution being overlooked in the band, just after the release of Wind And Wuthering, in early autumn 1977, Hackett decides to leave Genesis to “seek greater musical autonomy and be the captain of his own ship,” prompting the next Genesis album to be called And Then There Were Three.

This was a remarkably brave decision because, at the time, Genesis were becoming one of the biggest bands in the world, selling albums by the shedload and filling stadia in many different countries. But his decision has been more than justified many times over by the sheer variety and the quality of the releases he’s come up with, earning him a stellar rep as one of the top prog guitarists in the world.

If this book has one value, why it’s definitely worth reading if you’re a fan of Steve Hackett, it’s in highlighting the sheer range and the depth of the albums Hackett’s released, either with a band or solo. When fans think of Hackett, the word ‘Prog’ immediately comes to mind, but as the author explains, his work has encompassed so much more than just Prog. His recorded output has been extremely diverse as he refuses to be confined to one genre and has striven to avoid being predictable and mundane. His albums have incorporated world music (Till We Have Faces 1985, At The Edge Of Light 2017) Mainstream AOR (Cured 1981), Blues (Blues With A Feeling 1994), orchestral (A Midsummer Night’s Dream 1999, which actually reached the top ten of the UK classical music charts !!) – and even prog (Voyage Of The Acolyte 1975,  Spectral Mornings 1979 and To Watch The Storms 1992). As well as his later albums keeping alive the Genesis flame, such as Genesis Revisited and Selling England By The Pound, ‘live’ 2019. The book even includes Hackett’s 2020 acoustic guitar album, written and recorded in the midst of a lockdown, Under A Mediterranean Sky.

There’re also some really interesting snippets of information included I was unaware of, such as Hackett almost joining a 1982 ‘supergroup’ which would’ve included Keith Emerson and Jack Bruce. One omission, though, is nothing included about Hackett’s Box Of Frogs collaboration with ex-Yardbird men Chris Dreja, Jim McCarty and Paul Samwell-Smith, on their Strange Land album, but this is a minor quibble.

What comes across reading this book is Geoffrey Feakes, despite the wealth of description and detail contained about every one of Hackett’s albums, isn’t just a music anorak who’s put together a list of albums. First and foremost, he’s a real fan and his love of the music is evident from the way he writes about it, though he’s also a critical friend. When writing about Cured, for instance, he registers his extreme disappointment at the “Americanisation” of the album and how this isn’t the Hackett he’s a fan of. His descriptions of Hackett’s albums are illuminating without being pretentious, and Feakes brings Hackett’s music to life in an entertaining way. This is a book highly recommended for his fanbase.