THE TANGENT ..”The slow rust of forgotten machinery.” 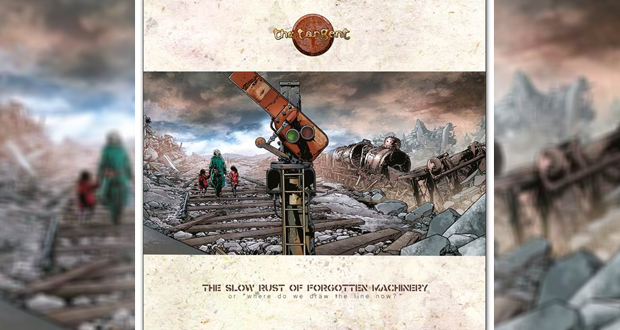 This is the first Tangent album since main man, Andy Tillison, was laid low by a heart attack in 2016, but he’s happily recovered sufficiently and is now back behind the wheel again, and it’s good to have him back.

This new album, the band’s ninth, will once again ignite the debate as to exactly what kind of band The Tangent are. The band’s mission statement, according to their website, is  “repurposing prog music, 2003-2017” but this is an album that can’t simply be called prog. With elements of Jazz fusion, Classic Rock, Prog and even a hint of Funk, there’s pretty much something for everyone in here though, with only five tracks at an average track length of just under fifteen minutes per track, and the longest one clocking in at just shy of twenty-three minutes, this is not an album for the faint hearted.  But, having said that, this is a prog album, albeit one laced and infused with a variety of different moods and influences.

And not just the more obvious seventies prog influences either. The Tangent’s philosophy has always been to embrace other more contemporary bands. “We don’t follow the Prog rule book,” says Andy Tillison. “There’re no Hobs or Orcs in our songs.”

This is certainly borne out by listening to ‘The slow rust …’ If you thought Rogers Waters was the leading dissident voice in the prog genre and had the field to himself with his often acidic take on the current world situation, notably his anti-Israeli stance, you should listen to what Andy Tillison has to say. On this new album, the lyrics address some very serious and topical themes, and he rails against many of the current evils bedevilling the world, which includes taking a swing at the current occupant of the Oval Office over his policy of building walls and stirring bitter divisions. The album does have an ideological slant, with the ‘forgotten machinery’ itself being the crumbling transport links refugees are forced to escape from their plight in.

But if topical themes aren’t your thing then, as they say, just listen to the music. Some of the music on this album is extremely challenging indeed, but it’s performed very proficiently and there’s some superb musicianship on display here. Changing personnel has seen the addition of Marie-eve de Gaultier and her voice blends beautifully into the mix. The Tangent have risen to the challenge and have come up with an album they can be proud of.