A journey back to the 90’s with pop punk idols Blink182 setting the O2 Arena on fire. 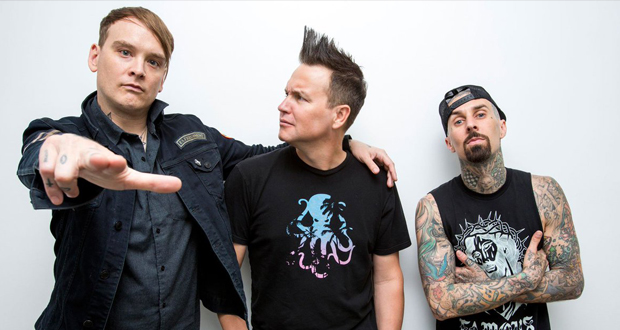 Pop-punk legends Blink 182 were massively influential on my music tastes during my youth so I couldn’t wait to see them live. I was a bit worried since they cancelled their date in Bournemouth a couple of days before London due to Mark Hoppus falling ill but luckily they went on with their London shows. The O2 Arena was sold out and full of fans like me who seemed to belong to the same generation, in fact unlike most gigs there wasn’t a visible age gap in the audience. I think this reflected that sense of ‘family’ that also the band wanted to show on stage. However, this time they would be without long term member Tom Delonge who took a different path, apparently to research UFOs. In 2016, Blink released the album California after the remaining duo decided to carry on and recruited Alkaline Trio frontman and guitarist Matt Skiba. Even though the album received mixed reviews it still turned out to be an acclaimed, chart-topping record and Blink never stopped packing out arenas like this one. Before Blink got on stage there was a strong sense of anticipation in the air. The new lineup jumped straight into the hit ‘Feeling This‘ which definitely created the right atmosphere. A huge Union Jack flag adorned with the band’s logo dropped from on high before Skiba took to the mic to greet the London crowd. They opened with a flaming ‘Fuck’ behind them which reminded me of that teenage anger and hatred for rules that was always sung so loudly in their records.

Fans sang along the whole time and continued as they delivered another fan favourite, ‘The Rock Show‘. The band’s set is mainly their greatest hits and I am sure most of us were really grateful for that. Although there was still space for California to shine. California is an album about home and about getting away, starting new and returning once more. The likes of ‘Bored To Death’, ‘She’s Out Of Her Mind’, ‘Los Angeles’ and ‘Sober’ pick up where Blink left off years ago. Today’s maturity goes side by side with the youthful anthems such as ‘First Date’, ‘All The Small Things’, ‘What’s My Age Again?’, ‘Down’ and ‘Dumpweed’.

However, the highlight has to be ‘that song we play for the ladies’ and there comes ‘I Miss You’ which ended in a barrage of fireballs. Quite strange to hear this song without the unique Tom Delonge’s tone of voice but Matt Skiba certainly did a great job performing it in his own way. Mark Hoppus and Skiba achieved a fine recreation of the chemistry that served Hoppus and Delonge so well over the years. Hoppus is actually the only original remaining member of the band that started in 1992, but Blink182 seem to be one of those lucky combos whose songs are more important than the personnel. With the band now in their 40s, this is a slightly more mature atmosphere. No more sexual or childish jokes in between songs but they still deliver a slick, professional rock show complete with ticker tape, pyrotechnics and lots of hits. Instead of banter, tonight we see brotherhood, in fact, it’s all about the music and the quality of what they succeed to deliver. This change might be a bit upsetting for many of us who support them since they were young and crazy but life goes on. With everything that’s happened, it’s unbelievable to see how many lives they have soundtracked. The lack of banter was glossed over thanks to Barker, who stole the spotlight for the entire night, drumming with such a passion and strength that it was impossible not to notice him even if he was sitting behind Hoppus and Skiba. The pyrotechnics blazed relentlessly too.

To finish, the band encored with the massive hit ‘All The Small Things’ and ‘Dammit’, which got everyone in the arena on their feet. Matt and Mark share the spotlight to a finale that sees the pair take a backseat to a drum solo from Travis Barker’s son Landon, there’s a togetherness on stage.

The only downside was the 75-minute set which felt a little bit short but overall Blink 182 delivered the nostalgic journey that I had hoped to see for a while showing that they still got it. Despite the passing of the time, Blink-182 didn’t miss a trick, and the energy on stage was as dynamic and magnetic as ever.