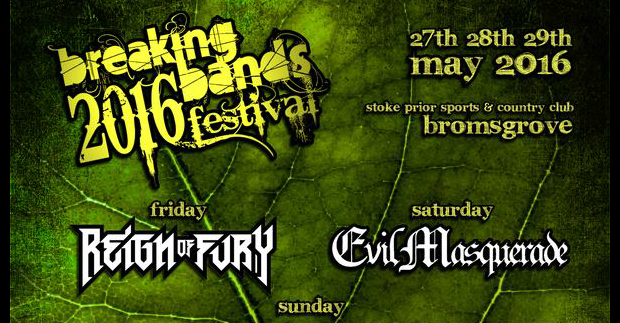 Organiser Jason McGuire has announced that Breaking Bands 2016 will take place on once again at Stoke Prior Sports and Social Club in Bromsgrove on the late May Bank Holiday weekend in 2016, Friday 27th – Sunday 29th May.

They released their follow up album ‘Death Be Thy Shepherd’ in February 2015 and received top marks from music media all around the world.

Breaking Bands Festival is an event that combines real industry know how with a genuine passion for new music. We jumped at the chance to headline in 2016, and can’t wait to be part of what looks to be real stayer in the festival landscape” – Reign of Fury.

Check out REIGN OF FURY’s incredible video for ‘Envy The Dead’ here:

Evil Masquerade are to play an exclusive first ever UK appearance performing the headline slot on Saturday 28th May!

I’m really happy to announce that Evil Masquerade is invited to headline the Breaking Bands Festival 2016. This will be our first show ever in the UK. You can look  forward to old, recent and brand new material. I’m looking forward to meet you all. Cheers” – Henrik, Evil Masquerade.

Check out the video for the bands brilliant track ‘Black Ravens Cry’ here:

In February 1999, when Iron Maiden announced that vocalist Bruce Dickinson was returning to the band, BLAZE started his solo career. In 2013 the singer presented Manchester-based band Absolva (Chris Appleton: guitars, Karl Schramm: bass and Martin McNee: drums) as the new live band for European gigs. The Breaking Bands Festival team have said they are extremely honoured that BLAZE BAYLEY will be performing at their second outing in 2016.
Check out the video for ‘Hatred’ taken from his Best-Of album, Soundtracks Of My Life:

Breaking Bands II will be held at Stoke Prior Sports and Social Club on the 27th-29th May 2016. Super-early bird weekend tickets are priced at £22.50 and are available from the official website until 1st June when the early bird price of £25.00 begins. www.breakingbandsfestival.com

Read our review of Breaking Bands 2015 in Issue 3 of RAMzine: