Starting somewhat gently, Clutch have hit the UK with two bands of European flavour that bring something a little different to the mix, flying the flag for the French, are the somewhat politically charged folk sounding The Inspector Cluzo, for the Germans, the desert rock sounding The Picture Books. Both bands consisting of nothing but two members. 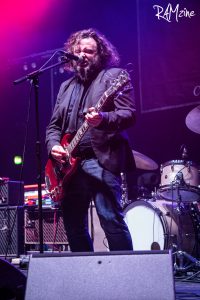 First up came the French, checking them out previously (as had a few others in attendance), the acoustic led folk sound wasn’t something that appealed, but attending regardless to get the moneys worth would prove to be a surprise. Sharp dressed and centre stage, the drummer and guitarist/vocalist bring more than what was a subtle, gentle sound. Active to say the least, the energy they put into the performance brings a charge completely unexpected and worthy of their place on the bill. The lack of interest I found I had in them when checking them out pre-hand via YouTube seems completely unjustified when witnessing their explosive live performance. Energy has them far from standing still, even when limited to a drum kit which doesn’t manage to stay in place, as it’s soon thrown around. Even finding brief moments of humour to adore the goat emblazoned upon their hanging banner, the sharp dressed men of The Inspector Cluzo completely take us by surprise and should not be underestimated. My mind wonders just how much of this show would happen in a small club venue, a sight I can only imagine is worth seeing. 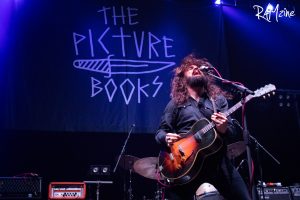 As the crowd thickens, next up were much more familiar act to us, the two Germans that create The Picturebooks bring their own style and swagger to the stage, the noise they produce stronger than the previous, but makes the indoors feel like a summer beach party around fires. Their hard approach to catchy, memorable tunes has the audience singing in tandem and creates an environment that you have to be there to truly encapsulate yourself in. This is a band that not only creates great songs, but great memories, and with a recent announcement of a UK headline tour coming up, we are beyond excited to see them in what will no doubt be a host of sold out shows as we await their hotly anticipated next album.

Breaking the trend of two member bands, the main act are set to take the stage, touring their latest release Book of Bad Decisions, Clutch always draw the crowds out en masses. Only just shy of a sell out show at the massive Brixton Academy, it is honestly a guessing game as to what we will hear tonight. As with every show they play, the set list changes from slightly to massively, and with people saying it is the best they’ve ever seen them perform to a few disappointed, the crowd are excited and keen to see the men take the stage and see what goodies they pull out of Santa’s sack. 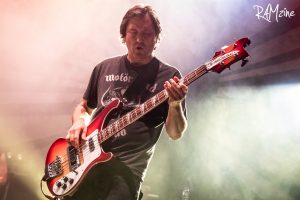 First out the sack comes one of the great belters from the new release, ‘H.B. Is in Control’, the album features heavily in the set and it’s fair to see why, the live studio recording approach the album took has defined a sound in the songs that just demands to be played live. They jump from era to era as they pull from a further seven albums of their extensive back catalogue, they seem to pick all the belters and with songs of such energy, you get the feel they want to finish the tour with a bang! Like a positive powerhouse, the uncontrollable excitement grips people like it hasn’t before, you can see why all those people were raving about this being the best they’ve seen them yet! Trying to sum up a show like this is almost an impossibility, it was filled with so much good that it goes back in a blur and even now, is hard to get my head around just how good it was. The set list almost sits like the playlist of a greatest hits of Clutch release, ‘In Walks Barbarella’, ‘X-Ray Visions’, ‘The Regulator’, ‘Crucial Velocity’, ‘Earth Rocker’ and ‘D.C. Sound Attack’ all make the set, then they go and smash that out the park with the encore featuring ‘Electric Worry’ and ‘How to Shake Hands’! Yet would you believe it, apparently they went and topped that performance on the final night of the tour in Birmingham the night after. 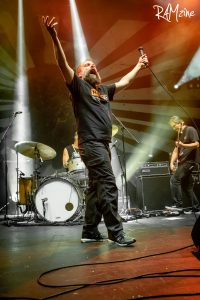 If you were not there, you are a fool, as we all in the press industry rounded up our favourite albums and gigs of the year early in December, we are quick to forget those shows still to come nearer the Christmas date, and boy did Clutch and the boys deliver Christmas early, this gig belongs up there with the greatest gigs and performances of the year, and without a shadow of a doubt, most definitely the greatest performance I personally have seen Clutch put on. They did nothing to disappoint (other than have to finish!) on what was an amazing day, spending the afternoon drinking in the pub with the UK Clutch fan group who created a massive buzz, and with them sparking the excitement, Clutch really delivered a show bigger than a fireworks night on the fourth of July. Clutch, we love you!