Damon Johnson goes solo ‘I think fans are gonna be pleased with this record & pleased to know I’m now committed to this full-time.’

Damon Johnson is kick-starting his solo career with new album Memoirs Of An Upraising, out on the 9th of November. The superstar guitarist who has been part of world famous bands such as Alice Cooper, Thin Lizzy, Brother Cane and Black Star Riders is currently playing an acoustic tour with band mate Ricky Warwick where they perform songs throughout their two prestigious careers. Today, before their London gig, we got to catch up with Damon about his new solo project.

RAMzine: Hi Damon thanks for your time today, how are you finding this tour so far?

Damon Johnson: This has been one of my favourite tours ever and I know it’s easy to think I’m just trying to advertise it, but you know Ricky is my mate and we have started this purely for fun. There was never a master plan or a business move behind it. This time the reaction from the fans has been great, they couldn’t have been more supportive and even more now as they know I’m moving on with my solo project. Our hardcore fans are here in the UK more than anywhere else in the world so to answer to your question yes, I’m very much enjoying this tour.

RAMzine: How did you and Ricky come up with the idea of joining forces for this acoustic tour? 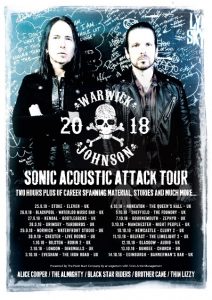 Damon: Ricky and I found ourselves in Thin Lizzy together in 2011 and then Thin Lizzy morphed into Black Star Riders which neither of us had expected. So we were doing our first proper Black Star Riders tour and Ricky had a solo acoustic gig in Belfast that he was committed to do and that’s when he went “Hey man do you wanna come? I’ll call you up and we’ll play a song” and I said “sure I’ve never been to Belfast before”. And then instead of one song we ended up playing like twelve songs, we had a great time. Something special happened that night, we both recognised it. A few months after that we were back in the UK and we put together a good five/six shows and they all did well, the reaction was great and so one of our managers said “When you guys have some time off we should book a proper tour” and that’s exactly what we did. It’s all been very organic and it’s kinda what you want. On this tour the crowds have been twice the size than last time and I’m so excited that we get to play at Dingwalls in Camden.

RAMzine: Does your set list change every night or do you prefer to stick to it?

Damon Johnson – In the beginning it changed, I think that was part of the fun. Then the crowds began to grow in size so the professional entertainer in me and Ricky felt like it’d have been better for the shows to have at least some kind of fixed set list. We enjoy talking to the audience, sometimes we talk way too much (laughs) so having a set list gives a little bit of organisation. So far no complaints. We play twenty-four songs, that’s a lot, so people get whatever they have come to hear, from Ricky’s solo stuff to Alice Cooper and all the bands we’ve been part of, we’ve covered it all.

RAMzine: What would you say is the main difference with playing a whole show acoustically?

Damon: The biggest difference is that it’s much more simple to make decisions. Maybe I’m kinda giving away the fact that we are a bit older and we like to have not so much chaos around. To go out with Black Star Riders is a big operation, there’s no just the band, there’s the crew guys, so the space in the dressing room and on the tour bus gets tight. From a musical point of view, the intensity is the same and that’s what fans like about it.

RAMzine: What’s the best memory you have with Ricky?

Damon: O my God. What a question! (laughs) On a creative level, definitely when we started to write songs together. Ricky has his own method of gathering his lyrics and it’s different from everyone else I have co-written with. It’s been a real education for me, he was very generous to answer to all my question and to explain how he does it. He completely re-inspired my song writing and my desire to express myself. When I have a moment with my fans I’ll always tell them that’s the main thing I’ll miss when I’m gonna go solo, co-writing with Ricky. We have a real chemistry and it’s not like that with everyone. He’s as good at telling a story as Alice Cooper ever was.

RAMzine: You have a new solo album coming up on the 9th of November, Memoirs Of An Upraising, what can you tell us about it?

Damon: I’ve never been more excited about anything I have ever done creatively than I have on this record. It’s a very honest record, lyrically. I also produced the record myself which I don’t know if I’ll ever do that again as it’s a lot of work and it’s nice to have a producer to kinda share point of views. On the other hand, this album is me top to bottom, I made all the decisions on the songs. I don’t think it’s a first listen kind of record, it’s definitely something you understand more as you keep listening. Due to my hectic schedule it took a while to put it together but it’s a great selection of songs, very rock. I think fans are gonna be pleased with this record and also pleased to know I’m now committed to this full-time. They are the new boss, they are the ones in charge so I take all suggestions on board. I would like to do another acoustic tour, I promised my daughter I’ll make a Christmas record and these are things that I’d have never thought about it two or three years ago and now I can see the path to getting them done.

RAMzine: What makes this album different from all your past projects?

Damon: The lyrics on the record are very honest, it’s all about real life events and things I have experienced directly or that come from some crazy dream I had. I felt like I had some very interesting stories to tell. My fans think I just listen to Van Halen, Jimi Hendrix, AC/DC and I do love all this stuff but as a writer there’s four records that really influenced this album for me. One is Nick Cave‘s last record ‘Skeleton Tree’ it’s so honest and so beautiful, sad but powerful. I’m also a big fan of The Clutch – the riffs, the tempos, the grooves – to me they are this perfect blend of Black Sabbath and ZZ Top, who I love. There’s an American songwriter called Jason Isbell who also happens to be from my home state of Alabama and who has put out three of the greatest records (in the last five years) than any other songwriter I can think of and I think his honesty in his records has inspired me more than anyone else. The fourth album, which is gonna surprise a lot of people is Beyonce‘s Lemonade. That was a beautiful and incredibly shocking work because there was no desire from her side to create a pop hit, she just had some things she needed to get off her chest, my wife and I listen to that a lot.

RAMzine: You are also offering guitar lessons to your fans, is that right?

Damon: I don’t want my fans to spend a lot of money aside from coming to the shows and maybe buy my record but when I talked to them about it some of them seemed very interested in the idea so the reaction has been great. I also sign guitars and items from my past. I think if my favourite guitarist offered private lessons I’d definitely sign up for that.

RAMzine: What’s the main thing you are looking forward to this year?

Damon: Great question. I’m very much looking forward to the unknown, you know, there’s still a lot of uncertainty because I’ve just now started my new solo path. This tour with Ricky is quite long, so after these six weeks I’m kinda ready to go back home and back to the desk to set up tour dates with the booking agent. I have reassured my fans in the UK that I’ll definitely come back so I’m really excited to find the right date in the calendar. It’ll be fun, I can’t wait!