Deliberations From The Shire with Mike James – Anvil 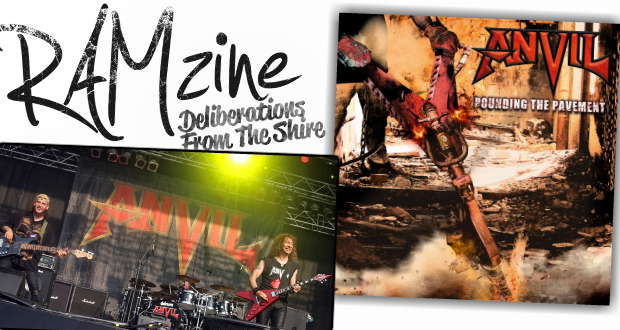 As fresh in 2018 as they have ever been Canadian rock giants Anvil return with their 17th album Pounding The Pavement. The band seem to have taken on board comments from fans saying they want a return to the sounds Anvil are known for and this album will not disappoint those fans.

The musicianship, as always is on point, but for me it’s the stories and lyrical content that make this album. Anvils genius is in the blending of comedic timings and presence with modern day struggles of say using the “Sat Nav” which is covered in the track ‘Bitch In A Box’ or taking on the subject matter of the Snowflake Generation and the day to day obsessions of the millennials. It’s expertly crafted wordsmithary paints a picture of the world we live in that doesn’t very often get covered by popular music.
The band are about to come over to the UK and tour the hell out of this album, so if they come to a town near you go see them you really won’t be disappointed.
[divider]
Share
Facebook
Twitter
Pinterest
Linkedin
Email
Print
Mix
Previous articleRebels with a Cause: New Book Exposes ‘Secret History’ of Original Rolling Stones
Next articleRockin For The Children 2018