Deliberations From The Shire with Mike James – Davey Suicide 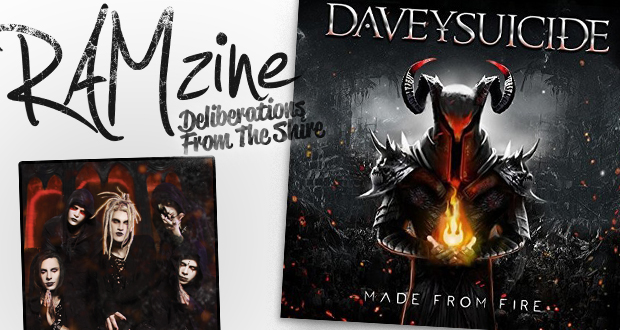 Raising up from the undead of Holywood Davey Suicide returns with his 3rd full-length album Made From Fire later this month. Having been at loggerhead with labels and the likes for nearly 2 years this album marks the rebirth of one of the “Top 50 Rockstars In The World” ( -Kerrang).

This album is packed to the rafters with synth driven sleaze from beyond the grave. Always known for their industrial yet catchy punk fused metal this album does not disappoint. The tracks on this album would easily feel right at home blasting out in big arena’s or in an underground club where the ceiling drips the sweat of the maddening crowd.

Davey’s lyrics blend so well with the melodic tuning and the way he sings them drips sex appeal with the ‘lock up your daughter’ style danger, that someone like Manson or Zombie would portray. The trying times the band have been through of late, has made them stronger as a unit. This shows all across the album and with tour upon tour planned, it could be the year Davey Suicide takes over the world.

Stand out tracks for me are: “Take The Pain Away’ which is leaning towards a big arena sound to the likes of Avenged Sevenfold, and ‘The Chemical In You’ which will test your spelling in time with the music.

Davey Suicide Made From Fire is out 24th March 2017 via Trisol Music Group.