The band who helped make your summers bright as a teenager, the band who made you realise you didn’t want to be casualties of society, the band who’s cheeky-smiled skater–punk style injected the anthem fuelled songs at your parties… Ladies and gentlemen, I present to you Sum 41. 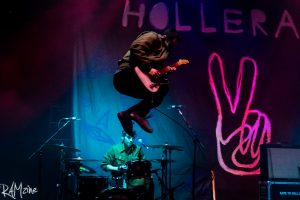 But first, the main support act, Hollerado. These Toronto-based musicians are not quite what I was expecting for a support band to a punk-rock band like Sum 41, if anything I’d expect them to be opening for Franz Ferdinand or a similarly pop-rock/indie band from the early noughties instead. The part Dutch lead singer, Menno Versteeg, was quick to make sure he knew the audience knew they were from Toronto, Canada exclaiming; “Whenever we are in Europe we always make sure our audiences know we are from Canada, not America”. They thanked the crowd and mentioned their appreciation for people who do make the effort to come and watch the support acts. A very pleasant and happy band that stood outside to talk to the crowd post-show and sell their cd’s in Stockwell Street outside the Academy.

The empty swimming pool-playing-punk band were next, the reason why nearly five thousand odd people had showed up to this sold out venue on a Thursday night in south London. An enormous white sheet draped down from the rigging, curling into the front of the stage, looking like a giant sail [though not the intention I’m sure]. Backlit in green, the band played numerous short covers to further push that eager anticipation right through the eighty-eight-year-old ceiling. Suddenly the white sheet drops revealing the five-piece playing ‘A Murder of Crows’. As the sheet is dropped, it also reveals a mammoth skull with Terminator-styled red eyes and two skeleton hands, one of which has a permanently erect middle finger to the crowd throughout the shows entirety. A tirade of energy washes over the crowd. Now they’re alive, pumped and ready to jump. 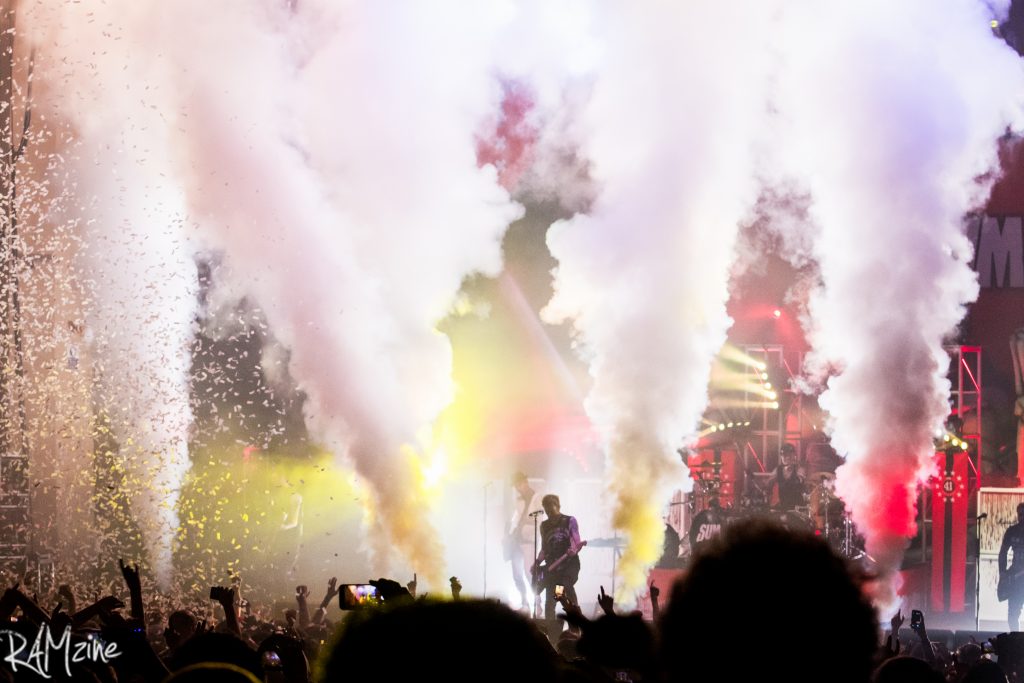 Infused with CO2 cannons, confetti and an impressive lighting rig only intensifies the enjoyment. Right up until the point where it is all trumped by Deryck running off stage passing the crowd on the outside of the stalls, right round to the front of house, to stand on sound desk accompanied by a mic to finish off playing ‘Makes No Difference’ of which he had left the main stage mid-performance. But the real reason was to meet with his guitar and play the soulful ‘With Me’ almost amongst the crowd, making eye contact with everyone around him by constantly changing his stance so he could turn the complete three-sixty. He brought his hands together and bowed in each direction at the end of the performance as the crowd erupted into a mass cheer. 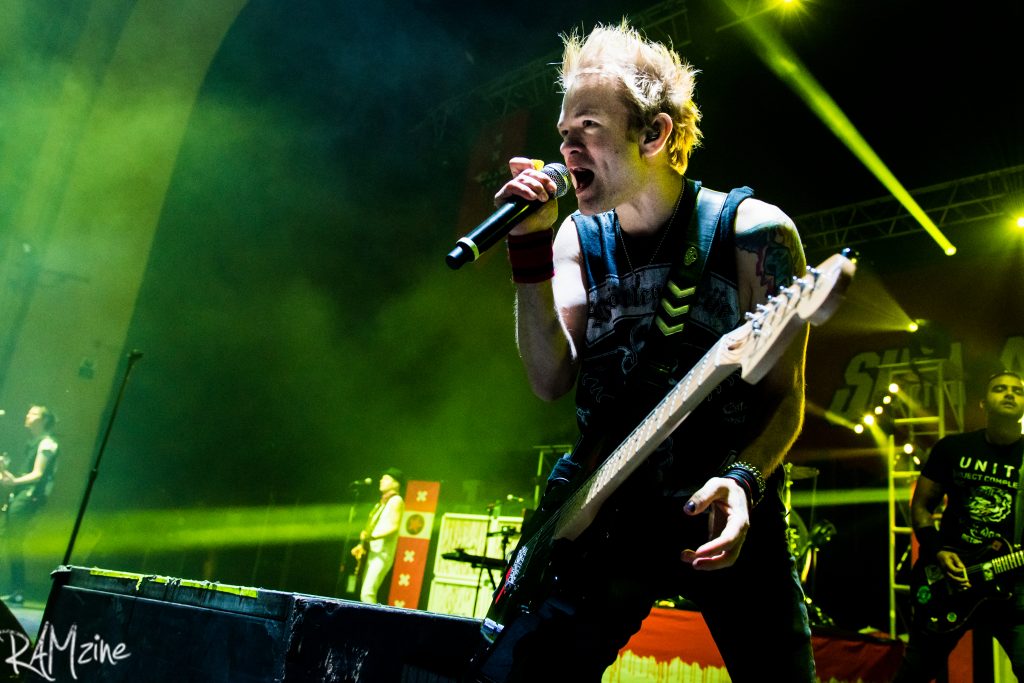 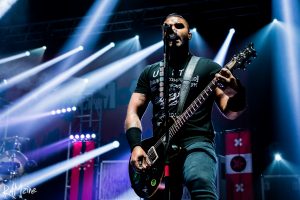 As I mentioned earlier, Sum 41 had played a multitude of short covers before gracing the stage at the beginning of the performance but as it transpired, this was not the end of their covers. For the final cover, in full length was Queen’s ‘We ‘Will Rock You’ and whilst this went down well, two songs later ‘In Too Deep’ was pulled out of the bag and that turned an already lively show up to eleven. The room had not been as alive as when a near five thousand people sang in that monotone-crowd voice that they were not ‘going under’. As part of the four-song encore, Sum 41 leaves the stage and a piano is wheeled out on which Deryck performs ‘Crash’ just as a one-to-one between himself and the audience. Keeping the piano on stage, ‘Pieces’ is performed as the rest of the band gradually returns to accompany him. 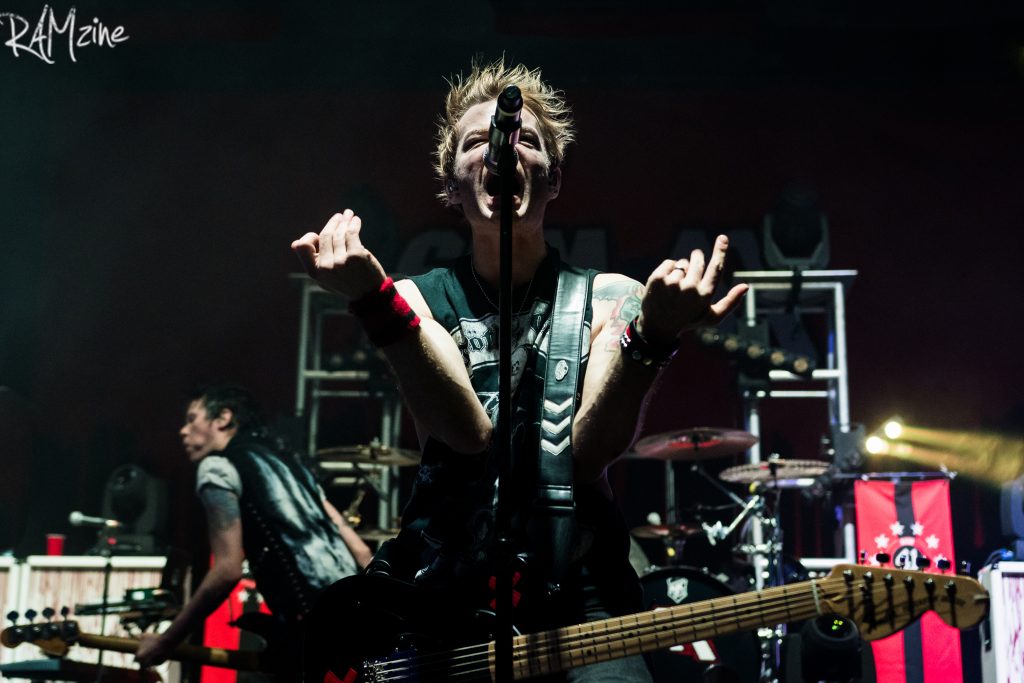 The night seemingly ends on, yes you’ve guessed it, ‘Fat Lip’ and sure enough the stage is empty of musicians by the end of the song. Then, all of a sudden, boom. A bell rang out over Brixton Academy and in enters Sum all dressed in eighties hairstyles and leather biker jackets to perform ‘Pain For Pleasure’ with Tom of course on the vocals as the true finale to the night.

All in all, a solid and energy-intensive and packed show by the Canadian five-piece. If you get the chance, you don’t want to miss the Don’t Call It A Sum Back Tour. 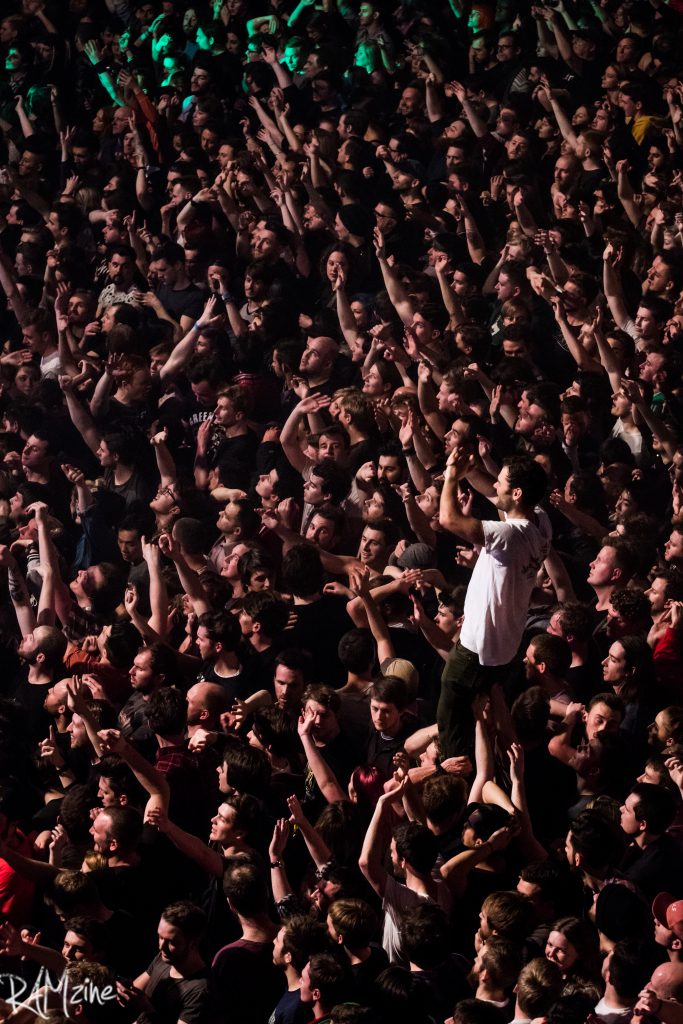