Review: Battalions – Nothing to Lose 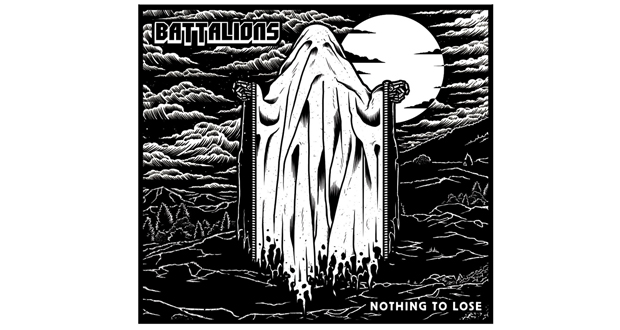 Nothing to Lose is certainly striking. Stoner, doom, ‘classic’ heavy; there are so many styles of metal catered for here. What’s most astounding about Battalions’ proficiency is that this is a debut album. There’s the tarmac thick sludge of Remission-era Mastodon, the infectious licks of Tony Iommi, and topping it all off is Phil Wilkinson’s brutal voice. Rather than employing a standard vocal styling you might expect given the aforementioned blend of genres, Wilkinson channels Converge’s Jacob Bannon, and who in their right mind doesn’t love Bannon?

The album opens with a slow, down-tuned, crushing riff as the band power though ‘A Coward’s Manifesto’, with all the ‘stronger than all’ swagger of Pantera, and the nihilistic rage of Killing Joke. Yeah, things are off to a bloody good start. This only continues with ‘Hoods Up Knives Out’, which introduces a slightly increased pace, thus bringing a majestic mix of Mastodon and Motörhead to proceedings. At this point the Hull-born boys introduce a chorus that is going to have crowds screaming their lungs out for dear life from any dingy hardcore venue to festival stages. An absolute banger.

‘Whiskey and Wine’ has a grimy sleaze to it in its lumbering opening, before the pounding 4/4 slam of Load-era Metallica around 90 seconds in. It’s designed to be headbanged to until your neck breaks, then get everyone bouncing to a southern groove. Speaking of southern-style, the opening riff of ‘Deadbeat Dad Beat Dead’ will have even the most elitist of heavy metal fans ready to jump fist first into a circle pit. It’s hard to imagine that this song won’t be a staple part of the band’s setlist for many years to come.

There are some downsides to the album unfortunately; ‘Blood Bed’ and ‘Bog Faced Roy’, while enjoyable, do pull some excitement out of the album, and the whole thing – despite the genre-hopping – becomes a touch one-paced. From a production standpoint, some of the finer intricacies of the more classic metal riffing gets lost in the sonic assault due to excessive gain. It is of course great to have a band that sound metal as hell and with some dirt under the fingernails, but on their next outing, maybe wind it back a smidge.

All in all, for those convinced that metal has been rubbish since 1990, give this a listen: The genre is still phenomenal, and Battalions are sludge-laden, living proof.