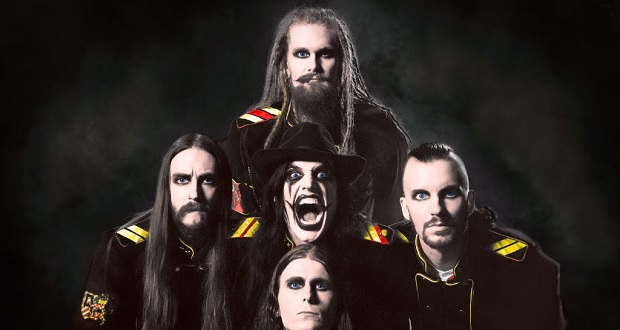 We’re finally here! Download 2018! RAMzine have guided you through all of the stages at this years festival (or at leas the ones on the poster) and now we have come to the main stage. In all honesty, this year’s line-up is so stacked, this could have been a top 100, but we have stuck to the traditional 10 to keep it simple. Who ever you see this year: you will have a fantastic time – but here is RAMzine’s 10 acts you need to see on the main stage at Download 2018.

Be honest when have you been to a festival and not saw someone with the famous ‘Jesus Is A C***’ t-shirt on? COF are iconic to rock festivals. And just because the latest offering from Dani Filth and co. are easier on the ear, doesn’t mean they don’t rock as hard- or have forgot their roots. Now part of the Nuclear Blast Family – the Suffolk goth-rockers released their latest record,  Cryptoriana – The Seductiveness of Decay, last September. Filth has gone on record saying this album is influenced by Victorian Gothic horror. This may be an indication of what is in store for their Download set and upcoming album. Mix that with a few cheeky covers, and maybe a few guest spots, this is probably the best Sunday morning alarm clock you can get.

Track to listen out for: Nymphetamine Fix

You could say this is a victory for ‘girl power’ or something like that, due to Maria Brink being y’know – a woman. Alas, I won’t. Why? Because it’s 2018 and female musicians should really be front and centre anyway. Enough of that: why should we check out ITM at Download? For a start their live performances are known for their OTT theatrics, plus it’s very rare we see the ladies and gents of ITM so savour the flavour until their next tour. This performance follows the band’s triumphant sixth album, which sees the LA five-piece walk down a slightly more blues-y path at times. Plus Maria Brink’s vocal is something you need to hear to believe. A lot of people compare her to Lady Gaga but that’s just dumb, she’s much better than that. It’s also ITM tradition to have a guest collaborator for ‘Black Wedding’ at live shows, so who knows who they have up their sleeve: Andy Black? Dani Filth? Ozzy?

Track to listen out for: Roots

No, not the film about skinny blue people (ha! Bet I’m the first journalist to make that joke…) this is the infinitely eccentric hard rock band from music’s sacred land- Sweden. The most obvious comparison is KISS, for their faces full of make-up and theatrical performances. Throw a little AC/DC, Queen, Faith No More, and even Pantera in there and you will get a close idea of how Avatar sound…almost. With their latest album,  Avatar Country, which depicts a fictionl country and it’s king – they are almost treading on the toes of fellow painted Swedes Ghost. If past performances and promotional material are anything to go by – it’s hard to tell where Johannes Eckerström and his circus of minstrels will do next. The video below for ‘The King Wants You’ is literally just the tip of the iceberg.

Track to listen out for: The King Wants You

The London power-metallers are scheduled (at time of writing) to play 40 minutes. Although their style is fast and furious – I’m not sure if you can fit over five DragonForce tracks in there. Whether you love or loathe them, you can always get your money’s worth from DF. A lot of fans discovered DF via their legendary appearance on Guitar Hero III but there is a dedicated fan base who have followed them since the release of their first record in 2003. Even if their music isn’t your cup of tea, their live shows are an EXPERIENCE. The fans bring customised Guitar Hero controls to their shows and the air guitars are insane as Herman Li’s actual playing.  Plus their latest album Reaching To Infinity is a tour de force in ‘power metal’ and no doubt this 40 minutes will be filled with ‘bangers’, as the kids say. Even if they can only fit in four tracks.

Track to listen out for: ‘Through The Fire And The Flames’

In the best way possible, Thunder have always been the ‘bridesmaid’ and never ‘the bride’. By that we mean Thunder have had a comfortable career supporting the biggest names in rock, while still gaining a devout fanbase over the past 30 years. Thunder are a band the ‘real’ fans always love. Don’t get us wrong, Thunder have had a great career headlining tours, releasing stellar albums, and front-man Danny Bowes having his own Planet Rock radio show. Although they came to fruition in 1990, Thunder have always represented what hard rock should be: powerful vocals, great riffs, loud drums and all round awesome tracks. A spiritual successor to Led Zep or Queen in that manner. If you have never listened to Thunder before, this is your best opportunity.

Track to listen out for: She’s So Fine

Although the Huntington Beach boys have headlined the festival once before in 2014, Avenged Sevenfold were always going to be a contraversial choice to headline the Friday night. Why? Because they aren’t grizzled old veterans? They haven’t crossed over in to the mainstream (yet)? They only appeal to ’emo kids’? Why should that matter when they were around, how well known they are, or who they appeal to? A7X have consistently released solid sounding hard rock albums, and proven they are headline material at all of their Download appearances. There’s a reason A7X were voted ‘All time greatest hard rock band’ on MTV2 (remember that?) and why they constantly get compared to GNR, Maiden, Sabbath and Motley Crue. ‘Avenged’, as the cool kids call them, are the perfect headliner for the first night. Also, the band have announced a new record for the end of 2018 – so this might be the first chance to hear the new material (don’t boo it) including the track they have recorded for Call Of Duty: Black Ops 4.

Track to listen out for: Bat Country

If you don’t like Black Stone Cherry – you are a certified grumpy pants. What’s not to love? They bridge the gap between Southern rock, American country, and metal. They sound like a band you need to be listening to live, in the sun, with a Bulleit Bourbon and ginger in hand. Is that not the ideal Download scenario or what? Thinking about it – BSC are like a fine bourbon: From Kentucky, they go down well with a lot of people, they improve with age. Funny that. This follows the success of their sixth album Family Tree, which made it to number 7 on the UK album chart. This is possibly the best time to see the Kentucky mother-truckers!

Track to listen out for: Burnin’

The self-proclaimed ‘God Of F**k’ divides people both musically and culturally. Nowdays, the moral panic over his ‘contraversial’ music video and performances seem prett, well, pathetic. Especially when there are a lot more extreme and harmful musicians out there. Yet since the 1990s, Marilyn Manson’s front-man…Marilyn Manson (yes, that’s the name of the band too, like Alice Cooper) has come a long way as an artist (in the literal sense), style icon, and all round public figure. Now, more than ever bands are citing Mazza as an influence on their sound. Manson very rarely makes UK festival appearances or tours widely these days. So, similarly to other entries on this list, it will be worth taking the time out to see the spectacle and telling your kids, or grandkids, you were there. Plus his last album, Heaven Upside Down, was a classic.

Tune to listen out for: Tattooed In Reverse

When Ozzy Osbourne announced his two-year farewell tour, there was a lot of doubters. Mainly because he’s done it before. More experienced readers may remember the ‘No More Tours’ Tour in 1992. Also, Black Sabbath only had a farewell tour last year. This tour is even dubbed ‘No More Tours II’ in certain parts of the world. Give the man a break! He is the pioneer of metal as a genre, has been in two of the best metal bands of all time (if you count his solo work as a band), and above all – he’s 69 (don’t giggle). He will have outlived David Bowie and Lemmy next year. He deserves a retirement after all he has been through: rehab, arrests, reality TV, career ups and downs, a quad bike accident and more! This is the last chance you will get to see the Prince Of Darkness in the flesh, and it looks to be a great set. With Zakk Wylde on guitar, Adam Wakeman on keys, Rob Nicholson on bass, and Tommy Clufetos behind the drum kit – it’s looking like a super group closing the 2018 festival.

Track to listen out for: Bark At The Moon

The tour this headline set is part of is called ‘Not In This Lifetime’, because we never though we would ever see Axl Rose, Slash, and Duff McKagen playing side-by-side again. After almost 20 years of the touring GNR being the Axl show, along with other original members having success outside the band – it wasn’t looking likely. Alas, a few dates were announced last year for the original ‘Appetite’ era line-up to reunite (well, almost). Add that to the fact GNR have just released the ‘Locked N’ Loaded’ edition of the classic debut, complete with unreleased track – this set CAN NOT be missed. This is scheduled to be a near three hour set. THREE HOURS. This includes material from EVERY album the LA rockers. Including covers and new material. This line-up also features members from all different eras of GNR such as guitarist Richard Fortus, multi-instrumentalist Dizzy Reed, and drummer Frank Ferrer. GNR are known for also featuring a guest, or two, on this tour such as Angus Young, Pink, or Dave Grohl – so who knows who might show up!  Fun fact: Axl Rose wrote ‘Paradise City’ after visiting Sunderland for the first time. Actually that’s not a fact at all..it’s a massive lie.Obviously.

Track to listen out for: Paradise City