As someone that quit a full-time ‘traditional’ job in my late twenties to join a band and then go on to form my own business in my late thirties, I strongly feel the need to highlight concern about mental health. Not just for musicians, but also for people who work behind the scenes in the music industry and struggle with keeping a balanced mental well-being. I’m one of those people.

Like many, through hard work I am extremely grateful for opportunities the music industry has given me. Respect where respect’s due, I’ve been fortunate to meet good people that have enabled me to continue doing what I do. However, like many others, my time spent working in this business has had an adverse effect. Stress and anxiety is an all too common thing nowadays. The easy connection to social media and the internet (in my opinion) has bred negativity and unrealistic outlooks that are easily confused with challenging possibilities.

The internet gives us a warped reality and seemingly offers up opportunities that are easily within reach when the truth is the music business is one of the tougher business to be in. Add to this that the hard rock & metal market is extremely small when compared to the likes of pop, hip hop and r&b genres.

The “rock star” no longer exists in the rock world. Rock is dead in the sense of it being a cash cow and from my experience, the majority of people that work in the offices of music companies are doing it because they love music. If a career choice was based on the money, working in the music business is probably not going to be the first option people choose.

I don’t claim to know everything and everyone. What I know is from my own journey and meeting great experienced people along the way who have been in the business a long time and/or understand the current standing of the music industry. Thanks to these people, I feel like I have a handle on the situation, but it’s taken me a while to get here.

Trying to help people on their own journeys understand my perspective can be tough and an emotional task for both sides. I’ve been asked on occasions to manage bands but the honest truth is that’s just not me. There’s still too much artistry in me and I prefer to mentor bands, giving them honest advice and show them the pitfalls I’ve fallen into on my journey, so that it helps them avoid what’s happened to me. 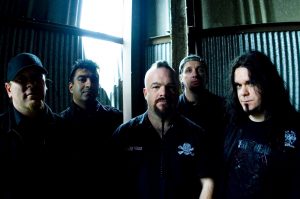 Flashback… In 2008 I was still playing in Panic Cell and if I look back, we were still achieving good things. Yet at the time, I just felt like there was no financial longevity in what we were doing and after spending six years fully immersing myself in the band both onstage and behind the scenes, the “crash” finally started to settle in. I tried to leave the band on a few occasions but was dissuaded. A big part of me still had that “But what if ” can do attitude (I still do). And so, for two years I continued, but all the while I was sinking deeper and deeper into a miserable place. I started to develop stress and anxiety, and so began my battle. It was in 2011 that I finally came crashing down and announced that I was leaving the band, and it was around then the awareness I wasn’t firing on all cylinders was realised.

I was experiencing problems in my sleep. I was waking up in the middle of the night in sheer panic. As time went by, the problem really manifested itself. I began having seizures, waking up panicking as my body convulsed to the point that I thought I was being lifted off the bed. The nearest I can describe this terrifying experience is epilepsy. On a few occasions an ambulance had to be called out and I was taken to hospital. This went on for four+ years. I was placed on epilepsy medication which combats these “night terrors” and whilst it looks like I’m stuck with the meds for life, they have had a positive effect.

After numerous appointments with medical staff, they couldn’t pinpoint what was wrong with me, but it was agreed that stress and anxiety was a major factor, if not THE factor as to why I was experiencing these seizures. Fortunately these experiences have got better.

In this industry, I find there’s always going to be an element of self-doubt, “am I good enough” attitude, but it is something that can be worked out eventually and you learn to deal with – if you want to work in this business.

As for business… it’s not a faceless organisation. It’s made up of human beings all trying to do the best they can about something that’s supposed to be fun and passionate for them. But, passion in this world can be lost so quickly now-days. There’s a fine line between success and failure and the two are blurred constantly.

I question sometimes why I do what I do and why I seemingly won’t go back to a “traditional job”. It all stems from the fact that I care, a lot. For instance, I might hear a story from a band or a friend in the music industry about a negative situation where they have been wronged and that just spurs me on to do something right. A lot of what I do is about giving something back, because we are all in this together and if we can’t pass on the lesson of learning from a mistake to help others, what’s the point? Mentoring, in my opinion, is more precious than ever, especially in a world that’s constantly looking for its next fix and doesn’t take enough time to savour the riches that’s come before.

My biggest fear for the generation coming through now is how they handle working in the industry and how long the potentially great bands and people will last if they don’t have a realistic support network and understanding how to navigate the industry. Social media is here to stay and it’s not a fast track to fame and fortune. Common sense, experience and mentoring is more crucial than ever.

Bottom line: there are no guarantees. But if you are good at what you do, have potential and are willing to listen, learn, commit and sacrifice; then there is success to be had. How success is measured is entirely down to you and if that’s not managed realistically; this is where things can go wrong. Surround yourself around good experienced people, and never be afraid to listen and talk, and never ever fear failure. It happens to us all. What counts is trying and savouring the victories, no matter how small.

From surviving to thriving: building a mentally healthier Britain by www.mentalhealth.org.uk.