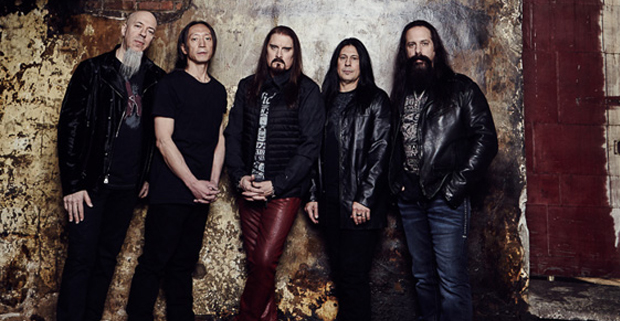 Celebrating the 25th anniversary of Images and Words, one of the most important albums in the history of progressive metal, Dream Theater returns once again to the 02 Apollo in Manchester.

Dream Theater are a highly influential band and this has since been made more apparent in the last few years as prog has started to become popular once again and this show makes a highly convincing case for this fact.

The band enters the stage to sweeping orchestral sounds before beginning with the 7 string anthem ‘The Dark Eternal Night’, one of the heavier yet more progressive songs in Dream Theater’s catalogue that embodied everything the band was to offer that night.

The set continues on with ‘The Bigger Picture’ which was only introduced in a live setting this year but will almost certainly become a live staple for years to come with it’s massive sing along chorus and beautiful piano passages.

The band leaves the stage with the exception of bassist John Myung for a heartfelt tribute to legendary jazz bass player Jaco Pastorius, a musician that was clearly a great influence to Myung, this helped to humanise Myung as many people may consider him to be somewhat distant and robotic, a complaint that has been made about the whole band, but these accusations are made invalid once the now iconic bass harmonics of ‘As I Am’ begins,

‘As I Am’ is probably the best song in Dream Theater’s catalogue to showcase the skills of guitarist John Petrucci who has topped lists of best guitarists of all time for decades and for good reason, as he begins the solo it seems like he is exerting little effort while displaying skills that would make even the most skilled of instrumentalists question how what he is doing is even possible all this before beginning a medley of Metallica songs which may sound out of place and random but fit perfectly.

After a brief intermission, Dream Theater return to perform ‘Images and Words’ in it’s entirety which is where most of their biggest songs reside anyway, before coming on to perform ‘Pull Me Under’, a suite of songs were played from the early 90’s to help give more of a perspective of the time these included songs from Pearl Jam, Nirvana and Metallica which helped establish the theme of nostalgia.

Surprisingly, there were no visuals to accompany the band which is usually a significant part of their live show given the theatrical nature of their music and while it’s absence was noticed it helped give the show a more intimate focus, a fan was overheard to remark “it’s like a club show in an arena”.

‘Metropolis Part 1: The Miracle and the Sleeper’ 25 years on is still an important song in their discography and in my estimation was the highlight of the ‘Images and Words’ set, it tells a really interesting story and shows off each instrumentalist without coming off as self indulgent and has been augmented for years since it was first played live what with the inclusion of solos and additional passages that were absent from the album version which helped to make the Images set more unpredictable.

While vocalist James Labrie has been criticised for struggling to hit some of the higher notes of the older songs and while there were definitely moments where Labrie struggles he mostly did a great job, most notably towards the end of the second set with ‘Wait for Sleep’ and ‘Learning to Live’ which provided a balance of the theatrical and the subtle vocal stylings Labrie has since become famous for.

The night ended with the 24 minute magnum opus that made Dream Theater one of the biggest names in not only Prog but in Metal in general, ‘A Change of Seasons’, everything and everyone involved in the performance of this was amazing and if it were the only song the band would play that night then it would still completely justify the price of the ticket.

While Dream Theater are definitely a polarising band they are still an important band and have an incredible live show and back catalogue that is worth your attention.