Goldfinger: “The arts are so important and it’s not always easy to get out there” Fireball Tour 2019

With seven hit studio albums and a legendary cover of ‘99 Red Balloons,’ ska-punk legends Goldfinger are no stranger to touring, especially action-packed, energy-fueled tours! This September they’re set to bring that energy to the alongside Less Than Jake, on the Fireball Fire Tour. We caught up with lead guitarist Philip “Moon Valjean” Sneed to discuss their thoughts before they embark on whats going to be a huge party!

RAMzine: So are you excited for the Fireball tour?

Philip: FUCK YEAH DUDE HAVE YOU SEEN THE LINEUP!?

RAMzine: How does it feel to co-headline with Less Than Jake?

Philip: That band is fuckin’ perfect. The dudes are so cool, so good and so dedicated to a good show no matter what, when or where it is. I love them and all they’ve done for our scene and music in general.

RAMzine: Are there any cities you’re particularly looking forward to?

Philip: It’s been a while since I’ve been back to Newcastle and Glasgow so I’m excited to get back there for sure. I always have a good time in London and Birmingham and of course Manchester #GGMU. In all honesty though I’m so in love with the UK that I enjoy each city wholeheartedly.

RAMzine: Do you drink Fireball?

Phillip: I enjoy everything related to fireballs. Drinkin’ em and breathin’ em.

RAMzine: Do you think they’re contributing well to the music scene, with their hottest band competition and tour?

Phillip: In my opinion any time a sponsor or company supports the arts it says a lot about who they are. The arts are so important and it’s not always easy to get out there. Bands and that can get a boost from anything Fireball does won’t forget it. In this day and age when it’s harder for bands to break through and make a living touring, bands and fans appreciate it when someone steps up and puts together killer tours and competitions for bands to get out there for the fans.

RAMzine: How do you think ska-punk has evolved since you first began?

Phillip: The best part is the heart and soul hasn’t changed at all. It’s a true soul that comes from the heart and experience. Music, production and sound will always move forward and refine itself in different ways but the beauty of watching older and newer fans of ska-punk is that everyone connects with it in the same ways. It’s beautiful and timeless.

RAMzine: Is it reflected in the modern-day crowds?

Phillip: The cool thing about modern ska-punk crowds is the energy matches the early days. Some bands fans age and slow down a bit or change how they approach the music but GF crowds are as fun as they’ve always been. It’s all what I like to call ENERGY UP!

RAMzine: Do you get along with Less Than Jake?

Phillip: I love those dudes and I hope they love me back 😉

RAMzine: What’s your favourite story about them?

Phillip: Just a couple years ago an airline lost my guitar and ALL my shit. I was headed straight to the show and they were backstage when we pulled up. We were about to hit the stage and I think every one of em offered me something. Chris offered his guitar and whatever else. Hell, JR even offered his Sax. Haha. Some day I’ll learn how to play that thing.

RAMzine: What are your plans following the tour?

Phillip: I head straight home to the US and do my radio show and podcast “The Rizzuto Show” and have some shows with my other ‘GF’ band Greek Fire. We just released a new record and have some festival and specialty gigs coming up. 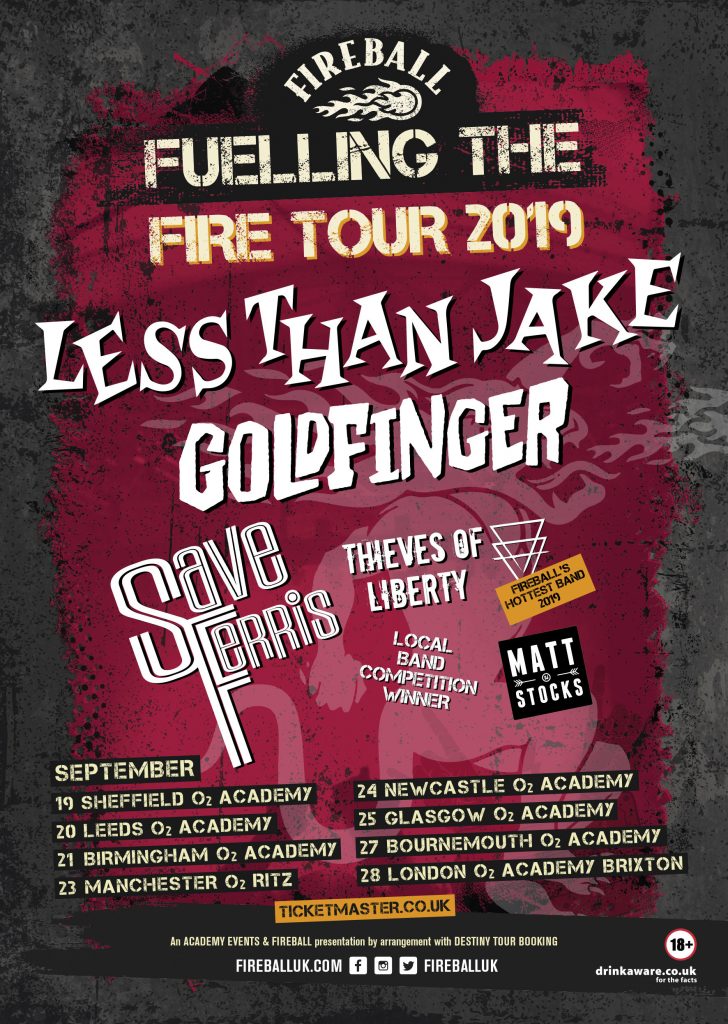