GUN’s frontman Dante reveals ‘Next year is gonna be fantastic for us!’ 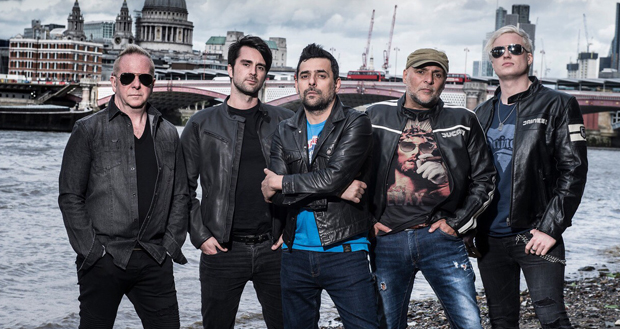 After a successful 2018, GUN are back on the road to play a series of exciting festivals and shows in the UK. Throughout their triumphant career these rockers from Glasgow, who formed in 1987, have gifted their fans with hits such as ‘Better Days’ and ‘Word Up’, not to mention their last acclaimed release Favourite Pleasures. The Gizzi brothers have gone through thick and thin together. Tonight they are special guests of Uriah Heep at Shepherd’s Bush Empire and it’s been truly interesting to catch up with front man Dante Gizzi again after our chat last year.

Dante: It’s been great, I love touring, this year we’ve been more focused on the festivals and I love playing festivals because it gives you an opportunity to play your music to fans who haven’t sort of heard of you before or maybe only remembered you from the past. I think it’s lovely to win over a new audience. It’s always hectic you know, it’s been thirty years into it. We kinda get used to the whole routine but I wouldn’t have it any other way.

RAMzine: As we were saying, you’ve played both festivals and smaller shows, what kind of atmosphere do you prefer?

Dante: I like both. As I said I like playing to a brand new audience, that is very appealing to me. However when it’s your own show I guess it’s more intimate, it can be hot and sweaty but watching the fans singing along is just incredible. I love that kind of atmosphere but it’s still very difficult to choose between the two as they are quite different. It’s always fun to play a longer set without having to think about your slot time though but apart from that I do like both.

RAMzine: Tonight you are playing in such an iconic venue with Uriah Heep, are you guys close with them?

Dante: I’ve met the bass player but I didn’t really have the chance to talk to the others. At the time I didn’t even realise he was playing with Uriah Heep, he’s such a lovely guy. This is only our second show with them and we were always kinda caught up in the sound check because there were a few things we were trying to improve or fix so that’s why we didn’t really get the time to have a proper conversation with the guys yet. Although I am sure we will, maybe even tonight. Meeting for the first time with Lee Kerslake has been a great honour, he was the original drummer for Uriah Heep and he’s getting inducted in the Hall Of Fame. He’s also played with Ozzy Osbourne you know, a very interesting and sweet man.

RAMzine: Is there one thing in particular you guys do before going on stage?

Dante: We do a group hug and we wish each other to do well on stage. Apart from that we simply go through bits and pieces of the songs as we haven’t played together for a few weeks, so it’s just the normal process of getting back into it. Tonight we’ll probably do the same just half an hour before going on stage.

RAMzine: Last time we spoke you just released Favourite Pleasures, what happened after that?

Dante: We did a few shows, not as many as we should have done, I think we had to take a back seat and see how the band was doing. The album had a very big success, it got at number 16 in the UK album charts but I don’t think we toured enough. We also came to split up with our management team at that time, I mean we are still friends and stuff like that, but apart from that we did ‘T In The Park’ in Scotland as well as Ramblin’ Man Fair this year. We’ve also recently played at Planet Rockstock which has been great fun. Hopefully next year we’ll do much more.

RAMzine: Your latest video ‘Take Me Down’ is pretty different from any other video you’ve previously released. What inspired you this time around?

Dante: I wanted something with a story line which didn’t involve the band, I wanted something different as you said. We aimed to create something a bit noir and dark, that’s where the night robbery theme comes from. I think it all came together really well and it’s a very interesting concept. I understand that fans like to see the band in a video but I kinda like the opposite, I love having a story line, if I could act as well I’d do it myself (laughs).

RAMzine: You never know, maybe in the next video.

RAMzine: On a less lighter note, the Gizzi brothers are known to be the founders and the heart of the band, what was the most difficult moment you had to overcome together in the music business?

Dante: Probably on the fourth album that we released through A&M Records as it was an album that me and Giuliano didn’t want to record, we just didn’t like it. It was nothing like the demos we had put together. Unfortunately there was a lot of pressure from the original singer Mark, the management team and the record label, they were all against us. So that was a really tough moment for us but at the same time it was positive for me and Giuliano to take some time out from the band and from the whole experience, you know we own a restaurant together so we focused on that. After we got our heads straight we came back and we wanted to do better. GUN wasn’t finished, it came down to the fact that we still had something to prove, that’s why we are still in this together.

RAMzine: What have you planned for the new year?

Dante: Next year is gonna be fantastic for us! There’ll be the thirty years anniversary of the album Taking On The World and we’ll definitely  be doing some shows to commemorate that. Then we are playing Stone Free Festival and Barcelona Rock Fest which is literally just been confirmed today.

RAMzine: Amazing! Are you guys thinking about a new album?
Dante: We are packaging a new album with the greatest hits and on the same record we’ll have around ten or eleven cover versions. It’s gonna be exciting!
RAMzine: Great stuff! Lastly, leave a message to the fans who have supported you throughout all this time.

Dante: I just wanted to say thanks so much to all the fans that have come to see us over the years and have loved our music. We couldn’t do it without you. We need each other’s I guess, I see us together as a big family.