Hardcore Superstar ‘We are 100% satisfied with this album, that’s what we are… and you can’t kill’ our Rock ‘N Roll

By Claudia Mancino
September 7, 2018
0
Share
Facebook
Twitter
Pinterest
Linkedin
Email
Print
Mix
The Swedish four-piece are soon releasing their 11th album titled You Can’t Kill My Rock ‘N Roll out on September 21st. The twelve songs have been recorded throughout 2017 and early 2018 and overall this record sounds very catchy and well written. With four singles already out ‘Have Mercy On Me’, ‘Bring The House Down’, ‘Electric Rider’ and ‘Baboon’ the success of this latest release is definitely in the air. Today we get to talk about You Can’t Kill My Rock ‘N Roll wit Vic Zino (guitarist) and Magnus ‘Adde’ Andreasson (drummer) in the beautiful setting of the Gibson Guitar Studio in Central London.
RAMzine: Hi guys how’s your day going so far?
Vic: We’ve been travelling and have landed from Sweden like two hours ago, took a cab and came here.
RAMzine: You are here in London for a press day, what makes this city so special to you and how’s your audience here?
Adde: This country has a rich music history, you pretty much invented what is good about rock ‘n roll. You were miles ahead with bands like The Beatles, The Rolling Stones, you can’t compete with that. This is the capital of rock ‘n roll in the whole world. Our fans here are dedicated and well mannered, well definitely before the drinks (laughs).
RAMzine: What’s been one of your favourite cities to play in?
Vic: I am gonna have to go with Milan cus’ the Italians are crazy, they are on a different level of crazy compared to the rest of the world. I love Italy and it’s great to see how intense our fans are over there.
RAMzine: The new album is coming out on September the 21st and it represents a return to your roots, what do you expect from it?
Adde: Nothing really, we go where creativity leads us and you can’t control that. We just felt like we wanted to make a Friday afternoon kind of record when you are coming home from work and can’t wait for the weekend to start. We don’t expect people to listen to it when they are sad, we’d like to be the soundtrack of a good time.
RAMzine: How do you think your fans will receive the new songs?
Vic: The response of the first four singles we put out has been great so far. At the same time, we can’t expect everyone to like it.
Adde: And especially after twenty years of doing this we almost become our own enemies because we’ve done so many records. Some people like the punk rock No Regrets stuff better, some other prefer the stuff from Beg For It and everytime we release a new album these people come out saying ‘I think you should have done this’ or ‘I think you should have done that’, the debates go on for the first three months and then it’s all settled again and people eventually start to appreciate it.
RAMzine: When you put together a new release, do you prioritise what could be your fans expectations or do you prefer going with your guts instinct?
Vic: Like Adde said before it’s the creativity that leads us. I think we need to believe in the stuff that we create before anybody else. Cus’ if we don’t like it, the general reaction kinda follows. If we are satisfied it’s easier for the rest of the world to join us because we believe in our music.
Adde: We write a lot of songs for an album and we try different stuff and sometimes when it doesn’t feel right you feel like you just wanna move forward, you don’t wanna go back to an ex-girlfriend, you want to achieve something new.
RAMzine: ‘You Can’t Kill My Rock ‘N Roll’ is a strong statement, what does this title mean to you? 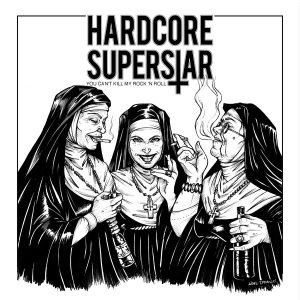 Vic: Exactly what it says, it has a very powerful meaning. And it doesn’t have to be just about music it’s about everything you wanna do and if you do it fully and with all your heart nobody can touch you. We are 100% satisfied with this album, that’s what we are, that’s what we do and you can’t kill it.
RAMzine: Absolutely! Also, some of the singles you have released from this album contain very catchy choruses, like ‘Have Mercy On Me’ and ‘Baboon’, does this represent a winning formula for you?
Adde: We’ve always been fans of big choruses, we grew up in the late 80’s mainly listening to thrash metal and sleaze metal and we wanted to combine these two worlds, plus you can never go wrong with a big chorus. Most of our creativity comes from our childhood and you can’t change that because it’s in our DNA.
RAMzine: If you had three words to promote ‘You Can’t Kill My Rock ‘N Roll’ what would they be?
Adde: Good Fucking Time.
Vic: I agree. We are a high energy, feel-good band and it’s important to transmit that.
RAMzine – This is your 11th album – If you had to choose which one are you the proudest of?
Vic – It’s always the latest one.
Adde – It’s because every time we always aim to do better, and every time we get a little bit closer to our goal.
RAMzine: What’s in store after the album comes out?
Vic: Just keep working harder and playing even harder. There’s a tour in the planning as we speak but nothing is decided yet.
Adde: Sometimes people like some songs even better after you play them live, so that’s another thing I am looking forward to.
RAMzine: Is there anything, in particular, you’d like to achieve in the next year?
Vic: Hopefully be bigger as a band and show our music to more people. We just want people to enjoy our music as much as we do and to come and see us live.
Adde: We would love to play Download, I think it’s time. We’ve done it twice and both times were great so hopefully, we’ll get to repeat the experience!
RAMzine: Any last message to your UK fan base?
Adde: We feel the love we are getting, just continue to give us love and we’ll love you back.
Share
Facebook
Twitter
Pinterest
Linkedin
Email
Print
Mix
Previous articleAtreyu drop album title track ‘In Our Wake’
Next articleBen Poole’s Dirty Laundry